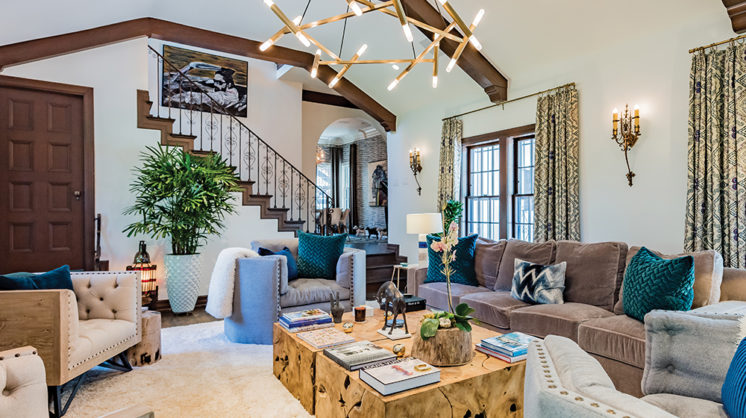 When Brian Bogert was in high school, he proclaimed to anyone who would listen that one day, he was going to live in the Mediterranean-style house at the corner of NW 30th and Harvey Parkway. “For my entire life, I’ve loved this house,” Bogert says. “I was sure [that] one day I’d live here, and I moved in in October of 2015. One of my partners lives three houses down, and one day he texted and said, ‘Hey, your house is on the market.’”

Shocked, Bogert immediately called his realtor and made an offer that day. This was in 2014. “They turned down my offer. So I waited. And waited. And it took a year, but the seller came back and took my offer. I couldn’t believe it was on the market. It had only had three owners.”

The house hails from the early part of the 20th century – 1918, to be specific. “It was by the owner of Sinclair Oil, for his daughter and her fiancée. The garage was added later,” he says. When he moved in, the house was in great shape, but its interior just wasn’t his style. “Everything was done in darker colors, and there was a lot of dark drapery. Jennifer Welch helped me transform the house. We used to be neighbors, and she and Josh are two of my best friends; Jen knows me. She updated the house and made it modern, but kept its Spanish style, including the original sconces, stained glass, tile and door hardware.”

Welch took all the walls to white, to stay true to the Mediterranean aesthetic of the place, and kept the floors dark for the same reason. Much of the tile throughout the home is handmade Malibu ceramic tile, revered for its vivid color and gorgeous craftsmanship.

As work on the house began, Welch and Bogert took off for Morocco for a couple of weeks to attend a friend’s wedding, followed by time spent in Paris and Capri. “We traveled to several places, and did a lot of shopping for the house,” he says.

Welch and Bogert sent home rugs, lamps and other treasures from the souks (outdoor markets) in Marrakesh. “The markets are huge. We walked for six or seven hours and maybe saw a quarter of it,” he says. While they were shopping, construction was underway back home. The kitchen was opened up, and the master bath was enlarged and transformed.

Despite its size, the living room is the coziest space in the house, and is where Bogert spends most of his time when home. The large sofa by Kravet is covered in a plush, spice-colored mohair fabric by Holly Hunt. Massive side chairs are covered in Holly Hunt alpaca, and Welch says they’re referred to as the “Game of Thrones chairs.” Original sconces dot the walls, and a Moroccan lantern found at the souk, one of a dozen such scattered throughout the house, sits on the steps leading into the room. Mediterranean-inspired drapes were custom-created in fabric by Oscar de la Renta. The chandelier is by Jonathan Browning. The coffee tables are carved from teak root, and a Ryan Cunningham painting hangs above the stairs to the second floor.

The entry hall and a spectacular upstairs bathroom received a coating of Venetian plaster, a technique that involves applying a mixture of plaster and crushed marble. The finished product has a marvelous, subtle sheen and is cool to the touch. There is but one man Welch will entrust with the process, and that man is Bart Stevenson, with whom she has worked for a decade and a half.

Although he said he probably bought his dream house ten years before he was really ready for it, Bogert is thrilled with the home, which he shares with two sweet pooches, Temus and Dingo. They occupy a section of a downstairs hallway that has been fitted with a half-door to keep them out of trouble during the day – although the first version was too short, and they were able to leap out. Temus, the older of the two terriers, is now 14. In his younger years, he would often accompany Bogert to work.

Speaking of work: At the moment, Bogert, who is the founder of the Social Order – which created such 405 mainstays as Fuzzy’s Tacos, Texadelphia and 747 – is largely focused on a new venture downtown, a 20,000-square-foot dining and entertainment destination in downtown Oklahoma City. The Jones Assembly at 901 W Sheridan pairs a 225-seat restaurant with separate downstairs and mezzanine bars, and boasts a 1,600-person capacity for live events within two historic facilities that were formerly part of The Fred Jones Manufacturing Company complex. For this project, Bogert has collaborated with James Boswell Architect, Tulsa, Kirk and Fred Hall of Hall Capital, Graham Colton and Chef Brittany Sanger. It’s open now … and represents another dream come to fruition. 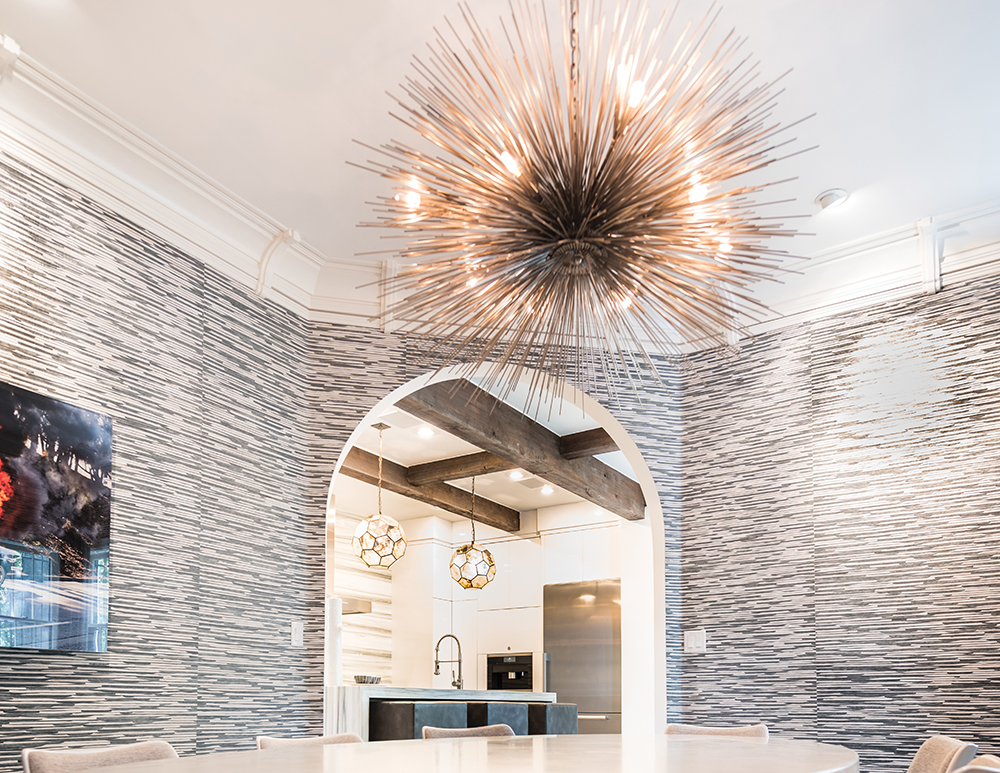 A chandelier by Jean de Merry, looking for all the world like the biggest, gold-dipped sea urchin in creation, commands the dining room. Heavily textured and knotted grass cloth wallpaper by Romo and a custom Kyle Bunting rug add visual pop while staying neutral. An iconic photo by Josh Welch, a flaming Rolls Royce, adds equal measures glamour and spectacle to the space. Welch recalled that the decision was made to gut the kitchen and reimagine it sleek and modern. “We drew inspiration from homes in the Hollywood hills, which combine the old and the new,” she says. A full-slab marble backsplash and book-matched island are topped by transitional pendants, bringing together the old and the new. 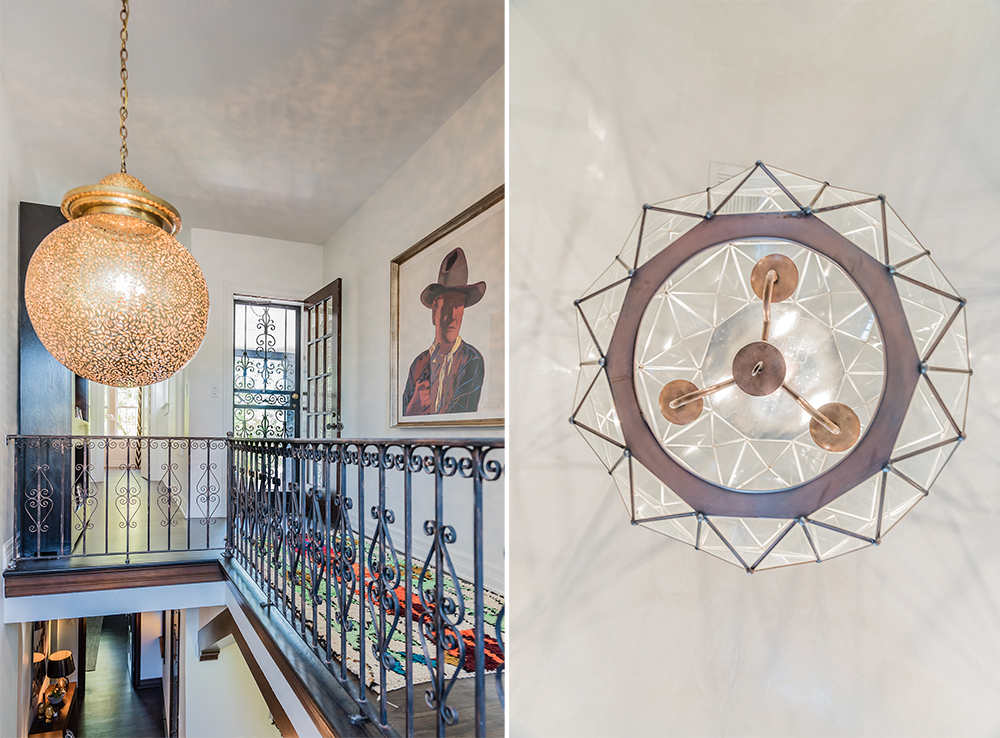 “White walls and dark floors, appropriate to Mediterranean homes, let the colors talk,” says designer Jennifer Welch about Brian Bogert’s dream home. The ironwork door and railing are original to the house, the rug was found in Marrakesh and a massive Moroccan lantern adds drama to an already-spectacular space – with Warhol’s John Wayne keeping an eye on everything.

Minimal yet mesmerizing in their geometric perfection, Romo chandeliers give panache as well as illumination in multiple rooms. 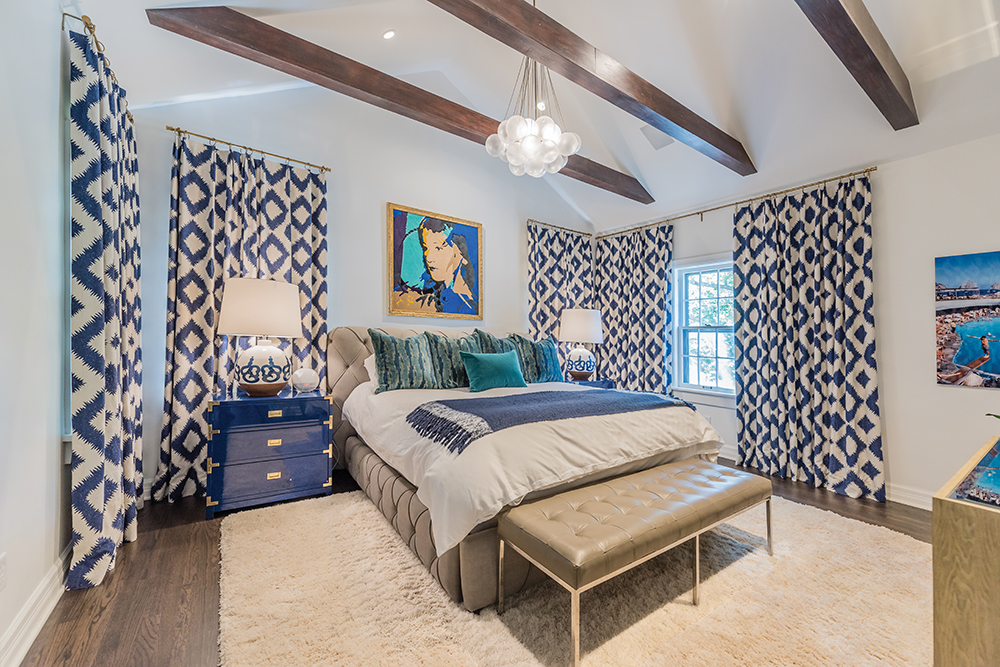 Bogert likes color and prints, and Welch says he isn’t afraid to go bold. Blue is repeated in the master bedroom, in the form of large, lacquered night tables and merry blue-and-white window treatments. The ceiling beams are original, and were kept neutral, as was the upholstered platform bed, rug and bench at the foot of the bed. A reproduction of a painting of Chris Evert by Andy Warhol created in bright cowhide hangs, large and in charge, over the bed, above which dangles a cheeky chandelier by the Brooklyn concern Apparatus Studio. 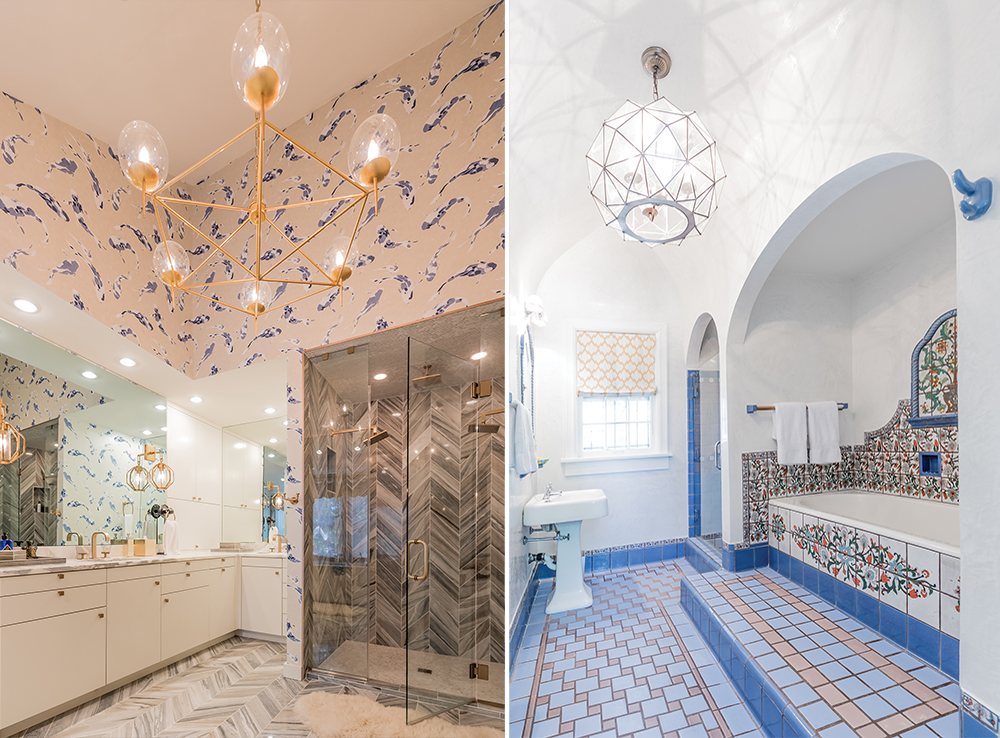 Gorgeous natural marble, applied in a herringbone pattern, covers the floor and huge shower. The intricate installation was accomplished by Young Brothers, under Welch’s watchful eye. “We wanted all of the fixtures in the house to be accents, in gold, and we knew we wanted wallpaper in the master bath,” Welch says. “Blue is used throughout the house, as a theme, in keeping with the Mediterranean style of it. The moment I saw the blue koi wallpaper, I knew it was perfect.” Bogert, however, needed some convincing. In the end, the scale of the room, covered in slightly abstracted fish, is breathtaking. A Romo chandelier adds the perfect finish.

The original tile in this bathroom was too spectacular to tear out, so Welch’s team cleaned the grout and resurfaced the walls in Venetian plaster, which could easily be mistaken as original to the house. A yellow-and-white Roman shade manages to complement the cacophony of color, and overhead another Romo chandelier is equal to the task of bathing the room in light.