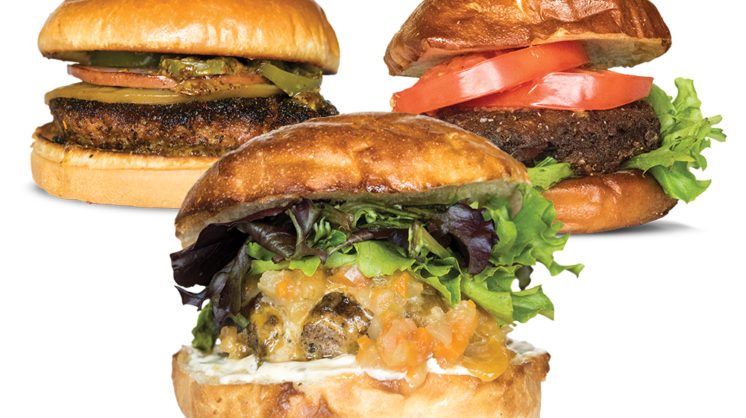 Brace yourself for a seemingly philosophical question with surprisingly divisive real-world applications: What is a burger? If you said “a beef patty on a bun,” you’re not wrong … but what does that prescriptive definition mean for sandwiches that don't depend on cow? After some heated back-and-forth in our office about what should or shouldn’t make the cut (or grind), we decided to go by the names on the menu in trying some far-ranging metro alternatives to the reliable-but-predictable beefwich. Purists may scoff, but in this case the joke’s on them – because they won’t get to enjoy these varied, often very delightful possibilities.

More pungent than beef, lamb makes for a spicy (not hot), rich, earthy burger. While you can make a lamb burger with New Zealand’s version of beef, why would you do that to yourself? It will smell like sweaty sneakers and taste similar. Start with Colorado or New Mexico lamb, and all goes well from there.

You can find good ones here and there around the metro – chef Melissa Aust at Stella, 1201 N Walker in OKC, does an excellent rendition – but they’re usually specials that crop up periodically, not staples that are available daily. Fortunately, that’s not the case at The R&J Lounge, where you can always get an extremely tender, juicy patty of lamb on a sturdy bun, with your choice of cheese and fancy toppings. How fancy? The lettuce is arugula, it has house-made chow chow instead of pickles and forgoes mayo in favor of an aioli laced with capers and truffle oil. Classy and delicious.

While there is no entry on Ludivine’s menu that says “Monday burger,” ask a denizen of Midtown or downtown what it is and they’ll know. Every Monday, beginning at 5 p.m., Ludivine serves a $10 burger with a side, and without substitutions. Think of it as a blue plate special; for those too young to remember the old days, if you didn’t like something on the blue plate, you did the grown-up thing and pushed it to the edge where it was safely ignored.The Ludivine burger is always Wagyu beef, sourced as close to locally as possible, and the toppings vary from week to week. It’s a small burger, so no need to worry about getting overstuffed, and you’ll still have room for a local beer. Check Ludivine’s social media Monday afternoon for the announcement, and then, especially if you have never been, go eat the most affordable, supremely delicious introduction possible to their style of cuisine. ,

You won’t find it on the dinner menu, but even though it’s served by a steakhouse, this fish dish is worth building your lunch plans around. Salmon instead of beef and presented as a fresh filet rather than ground, it’s a well-seared slab of Atlantic goodness that’s then lightly breaded and fried for a rewarding crunch, and crowned with lettuce, red onions and a tangy remoulade. The meal comes with a choice of side; the mac and cheese is good, though so are the fries, and they might help reinforce the “burger” idea. It’s light, classy and really very good. Highly recommended. 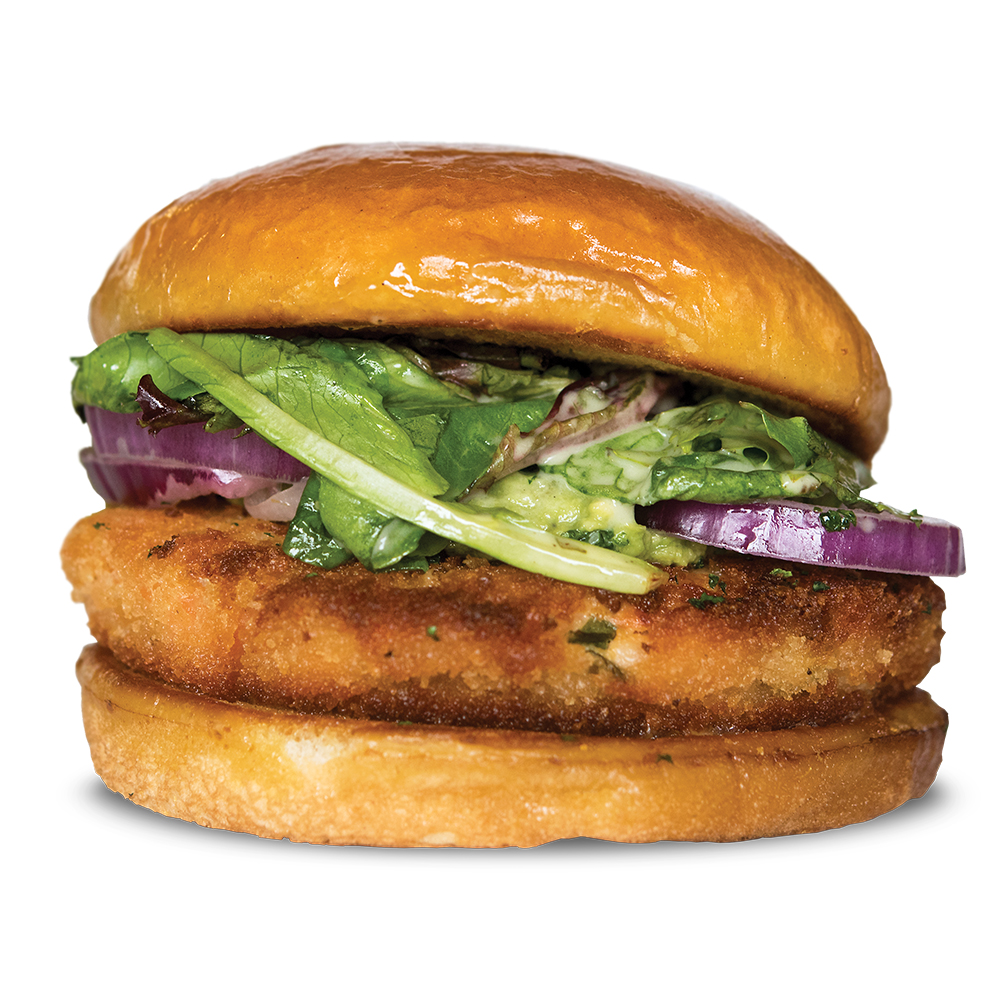 Beef is part of the equation, true, but the true onion burger is a package deal – and an Oklahoma classic. The El Reno-style onion burger was born of a desire to stretch food a bit further during the Depression, by mashing the shredded vegetable into a disc of the protein, but since the result happens to be delicious, it’s still on the menu nearly a century later if you know where to look. And while you can’t beat Robert’s Grill for authenticity (it’s passed its 90th anniversary and still feels timeless), the nearby Sid’s is a little comfier and also sells shakes. It’s inexpensive because it’s a thin patty that’s not very big, but that’s a good thing: It’s at its best when eaten quickly while steaming hot, so inhale and enjoy.

In a world where definitions are as interchangeable as Legos, a vegetable medley can become a burger; it simply has to be pressed into the proper form – because shape matters, even if components don’t. However, there are good veggie “burgers” in the world, and Picasso Café has one of the best and most popular in town. Starting with two items that are delicious in their own right – quinoa and black beans – surely helps, but the texture is where veggie burgers usually fall short (as well as, just saying, taste), and this one does not. No, it doesn’t have the texture of a beef burger; that requires a delicious piece of meat. But the texture is not off-putting, and if that sounds like damning with faint praise, it is not meant to – this is a solid sandwich option.

The earthy, spicy qualities of quinoa and black bean are wisely complemented with solid crunch from Romaine lettuce, tomatoes and onion. The spicy aioli adds a welcome kick, and don’t be afraid to ask for hot sauce to spice it up even more. The burger is listed as vegetarian, but it can easily be made vegan by scratching the aioli.

Republic has succeeded at this hamburger alternative by deliberately leaning away from trying to force too much similarity to ground beef – the patty is a looser mixture that lets its chickpeas keep some of their distinctive texture, and that makes it better than if they had blended it into a homogenous mush. It’s lightly toasted for a little more cohesion, and has a surprising but very welcome spiciness and a pleasantly nutty aftertaste. Slathered in a cool, zippy cucumber raita on one of Republic’s dense pretzel buns, the result is a sandwich that looks like a burger but has its own tasty identity.

This is not exactly a printed menu item, but if you’ve been to The Garage, you already know that you can get any burger on the menu with bison. This is Oklahoma, after all, and if you want to serve Oklahoma food, shouldn’t bison occasionally appear on the menu? The Garage believes so, and the world is a better place as a result. Bison is gamier than beef, so it works well with stronger flavors. It’s also very, very easy to overcook, so be civilized and order it medium or below.

The bacon cheeseburger is an American classic, so it rightly belongs on this list, and jalapenos are a wonderful modification, as they pay tribute to our sort-of-Southwestern location. The Garage adds garlic aioli, lettuce, tomato and onion, but you can build it how you prefer. These are big, bold flavors, so the jalapenos will help cut through all the heavy proteins and fats, as well as add a little punch. By the way, the housemade chips are some of the best in Oklahoma, and we highly recommend them as your side. , Multiple locations, eatatthegarage.com 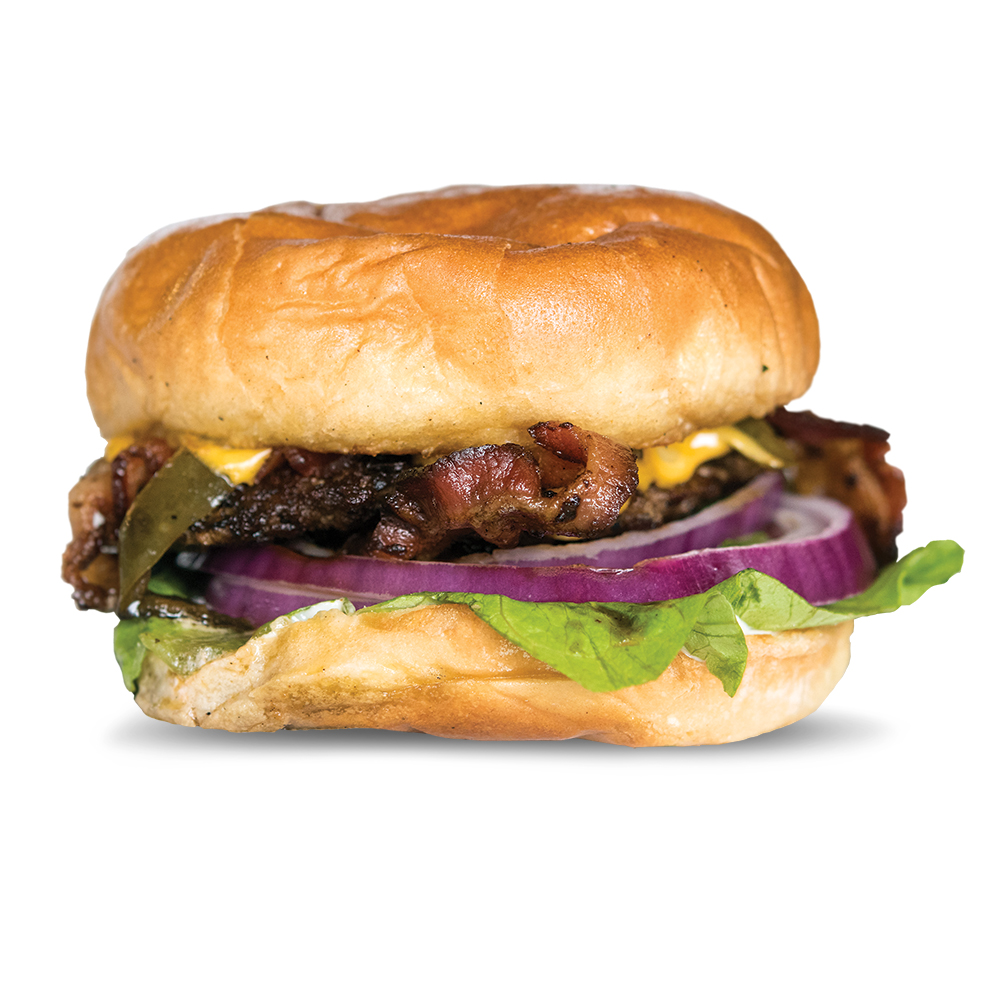 While you’re seeking diversity, why not get it in a single burger? This dramatically named powerhouse tops its beef with a hot link, and a fried egg (seriously, eggs on burgers), and pepper jack cheese, and also a scoop of chili in case everything else gets lonely. Plus, the beef in question is the exceptional No Name Ranch brand, an organically raised breed free of pesticides, hormones and antibiotics and loaded with flavor – and Irma’s is among the only places in the metro to get it. The ranch is located in Wynnewood, hence that part of the burger’s name; the other is probably an homage to either OKC’s NBA franchise or the sound it makes when the waiter sets this savory monster on your table.

If you know Tucker’s – and you should – you probably know it as a source for thick shakes (mint chocolate chip 4 lyfe), big bags of fresh fries and vast heaps of charred onions on a slab of local beef in a buttery bun. A double with cheese, mustard and pickles is a sincere joy. What you might not have internalized is that if you’re feeling slightly more health-conscious, you can swap out the beef for a patty made with ground turkey – similar in size and texture and not that far away in taste, especially once you add in the onions and condiments. This is one alternative burger whose substitution a customer might be least likely to notice, and since this is Tucker’s we’re talking about, that’s a good thing.

Chef Chris McKenna came up with the Piggy Burger a couple years ago, and now he can’t take it off the menu. Customers – this writer included – would revolt. Made from ground blackened pork (with a little bacon in the mix) and topped with sliced ham, this burger combines pork’s best smoky, peppery and savory qualities. It comes with smoked Gouda and pickled jalapenos, but an earlier iteration had Anaheim peppers, and it’s worth asking if they have any lying about. House-made mustard and a brioche bun finish it off, but the best news is that the smaller size leaves you satisfied but not stuffed. It’s a perfect lunch-sized burger.

The Piggy Burger is only available at lunch on weekdays, but reappears on the Saturday and Sunday brunch menus – and at those times, add a fried egg. Just do it. Eggs make everything better except bubble gum and non-alcoholic beverages, and Chef McKenna will not be insulted if you add one; he’s likely done it, as well. If you have no concerns for your arterial health, might as well add some bacon, too.