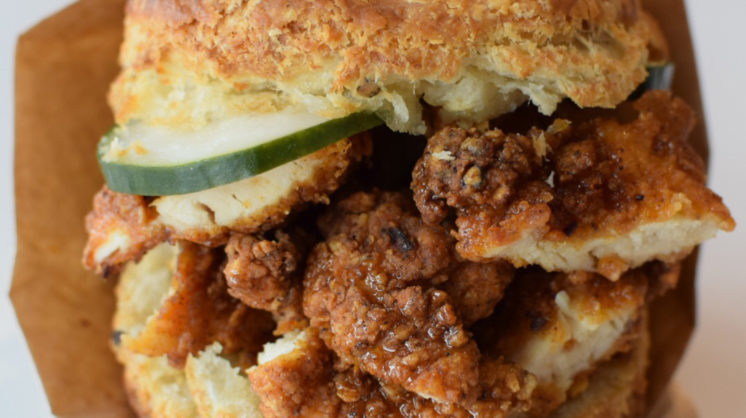 Buttermilk Sliders, formerly a food truck owned by Todd Woodruff (Waffle Champion, Nonesuch), is finding a new, fixed location inside the Pueblo development in the Paseo Arts District. Woodruff said an application for the build-out permit would likely be submitted by the end of this week, and the concept is tentatively scheduled to open in February.

“I told Shaun Fiaccone and Jeremy Foraker that I would love to do a breakfast concept in the Pueblo space,” Woodruff says. (The three are partners in Buttermilk.) “I’m not from Oklahoma City, but the handful of experiences I had in OKC as a teen and young man were in the Paseo. They are good memories. It feels good to do something in that space, too – the first new construction in about 50 years.”

Buttermilk will have a “really small, straightforward” menu consisting of biscuit sandwiches, much like the original truck’s menu. “We’ll lab test a bunch of things,” Woodruff says, “but we want to be small and focused on quality. We’ve already got the biscuit recipe, and I’m blown away by it.”

Fiaccone said Woodruff’s Day One Concepts team will be running the day-to-day operations of Buttermilk, and he and Foraker are concentrating on the buildout.

“Obviously, we’ll all be involved in tasting and working on the menu, but Todd has a good team ready to go," he says.

That team includes general manager Nate Gaston, who volunteered to become the new GM after holding the same title at Waffle Champion for a year and a half. In addition to Gaston, the Waffle Champion service model will be transferred to Buttermilk.

“The flow will be a lot like Waffle Champion,” Woodruff says. “And so will the seating. We got much of our inspiration from Eggslut and Free Range in Los Angeles, and the counter service model makes the most sense right now.”

Buttermilk, with 1,500 square feet and seating for 32, is one of three food service/bar operations going into Pueblo. It will be located on the southeast corner of the development, which is already fully leased. Fiaccone said the time was finally right for the Paseo to begin new development.

“The Belts had a vision for the Paseo as a historic arts district, and when you do things like that – preserve a district and respect the integrity of it – things take longer," he says. "They go slower without public money, but I think Paseo can be what the Plaza has become.”