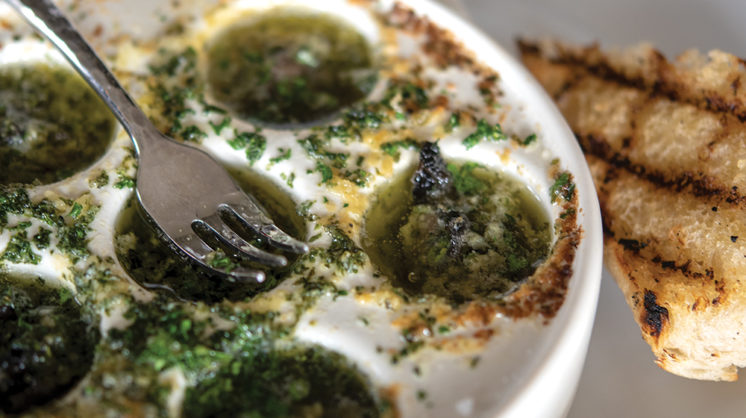 OKC’s Ambassador Hotel had a great location in the red-hot Midtown district, a recent renovation to fill its beautiful 89-year-old building with cutting-edge luxury, even a signature gathering space in its rooftop O Bar … but it was missing a really top-tier house restaurant. Until this fall. When the Ambassador opened neighborhood-style French bistro Café Cuvée, the temptation must have been nearly irresistible to say “Et voila.”

Cuvée – a term you’ll see on wine labels to denote a special blend and to connote prestige and quality – partners elite OKC restaurateur Kurt Fleischfresser with distinguished younger chef Taylor Desjarlais, a veteran of Chae and Vast, for a take on French cuisine that emphasizes approachability. 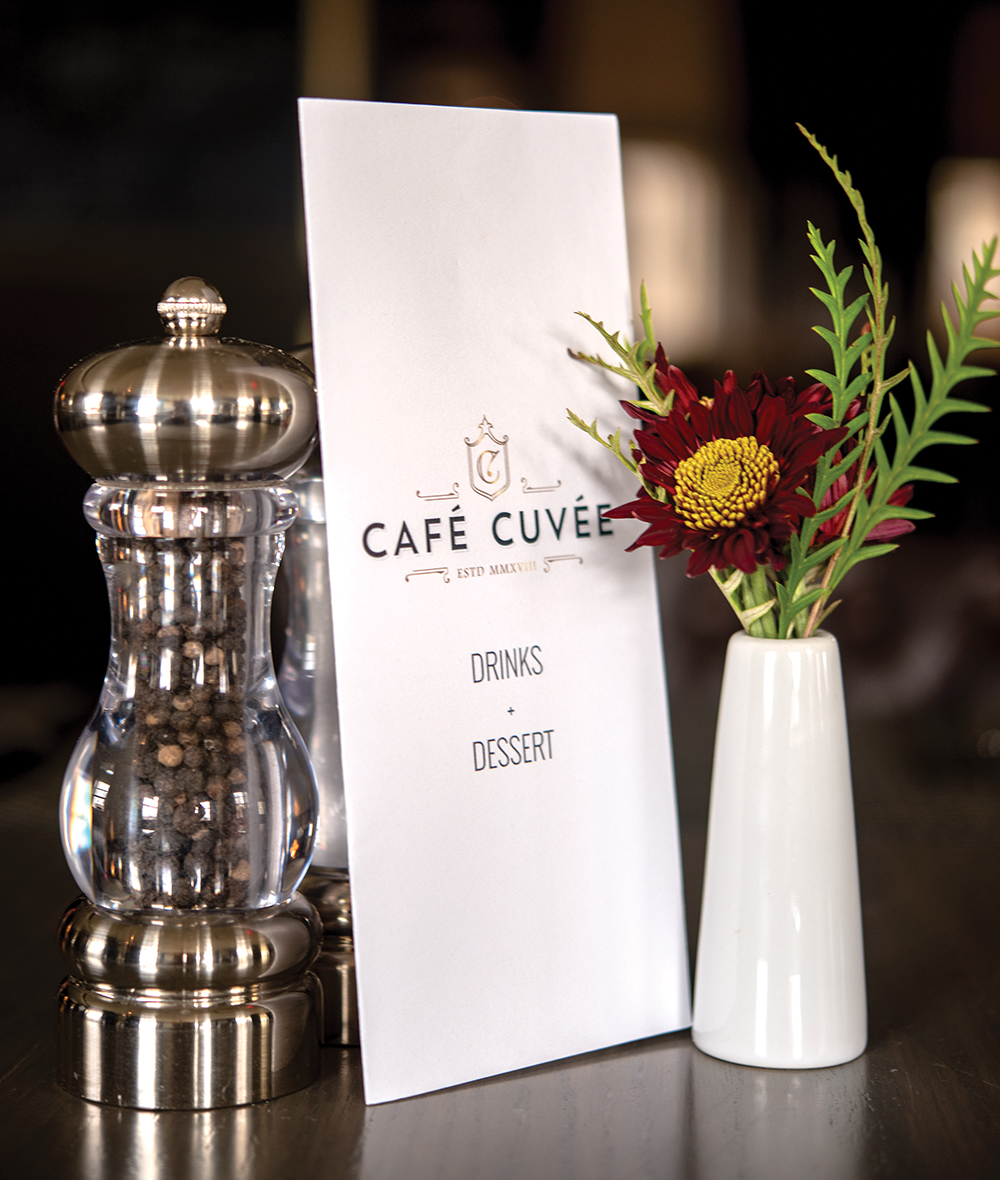 I love what they’ve done with the space; the black walls and gold accents give the area a cool, intimate vibe, but it’s not small or cramped at all. I’m not suggesting you should get up from your chair and start doing a can-can … but there are a couple of spaces where you could. And once the weather permits again, the Ambassador’s niche courtyard is an ideal semi-secluded spot for lingering over a glass of Domaine Philippe Raimbault Sauvignon Blanc at the handful of tables.

You could start your meal with the rich, housemade country paté or the sweet and savory balance of the bleu cheese and apple tart and be perfectly happy with your choice. But my favorite of the hors d’oeuvres turned out to be something I’d never tried before: Escargots de Bourgogne served still sizzling. “This is as traditional as it gets,” says Desjarlais, “parsley, butter, garlic and that’s it.” The snails themselves are unexpectedly tender, slightly chewy little morsels, and dipping the accompanying grilled toast into the garlic butter they’re served with makes the selection worthwhile all by itself. 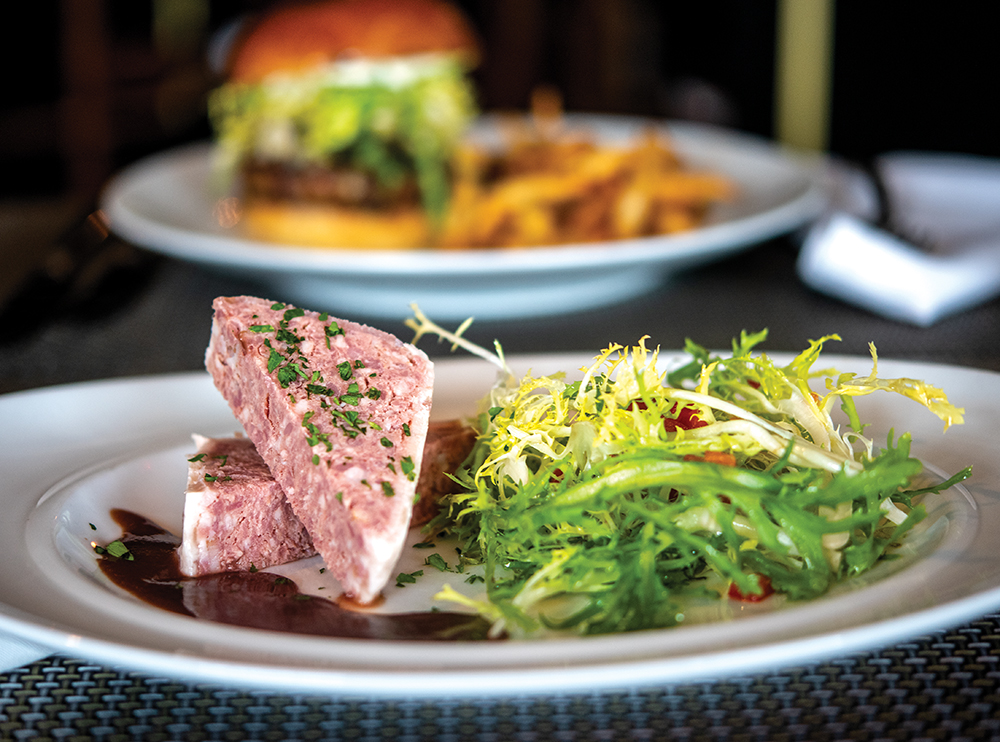 I liked the escargots even better than the moules frites (mussels and fries), which is saying something considering how good the latter’s savory white wine broth with just a touch of paprika is. Speaking of seafood, keep an eye out for the specials chalked on the restaurant’s pillars; that’s where you’ll occasionally find their notoriously excellent Dover sole meuniere. Land-based entrée options include a simple, satisfying roasted half chicken, the beef bourguignon (see page 59) and the wonderful house Bistro burger with Stilton cheese, roasted garlic aioli and astonishingly good lardons (crispy little bacon cubes). Nothing too fancy, everything delicious.

Dessert, on the other hand, can get a little fancy, especially if you take my advice and get the soufflé. When it gets to the table, perilously towering over the confines of its cup, the server uses two spoons to excavate a cavity in its tender top, and the resulting space is filled with raspberry jam and a dollop of Grand Marnier-infused whipped cream. The delicate confection doesn’t last long before collapsing – as the great French poet Baudelaire said, “Each instant swallows up one crumb of the delight accorded to each man for all his mortal day” – but even as it diminishes, it remains delectable.

Café Cuvée puts more emphasis on faithful execution of French classics than on innovation – “Nothing we’re doing here is reinventing the wheel,” says Desjarlais, whose grandparents were French – but given that many Oklahomans are not regularly exposed to these flavors, it’s a thoroughly tempting avenue for exploration. Go check out les horizons nouveaux.