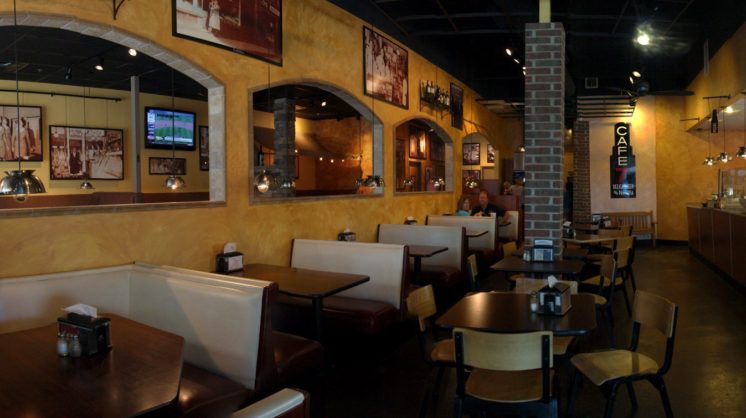 Café 7 was almost a Which Wich. The local bistro that specializes in sandwiches, salads, pastas and pizzas turned 10 years old this week, but operating partner Jimmy Mays said the team’s first idea had been to go with the Dallas-based franchise.

“We ran the numbers after we made our initial investment, and really didn’t like how they looked,” Mays says. “The landlord wanted a tried-and-true concept, but at 26, I guess I didn’t know any better, so I talked him into letting us open Café 7. Ten years later, I wake up and see what we’ve done, and I think it’s pretty awesome.”

Mays opened the North May location with Tulsa restaurateur Paul Sorrentino on Nov. 6, 2006. Sorrentino and Mays met at Oklahoma State University while Mays was a student and Sorrentino a professor. Chris Kana, another Oklahoma State alum, signed on as operating partner shortly after Café 7 opened.

“I listen to a lot of my friends complain about their jobs,” Kana says, “and I’m grateful for this one I’ve had for nearly 10 years. I wake up every morning, and I like going to work.”

In terms of what has made the concept so successful – aside from delicious, affordable food in a setting that is very family-friendly – both Mays and Kana gave credit to their staff, including Stephanie Miller, now the operating partner at the Café 7 downtown. Miller, then Morrical, signed on two months after the North May store opened, and then worked her way into ownership.

“We only have to hire three to four people per year,” Kana says. “Our turnover is ridiculously low, and the turnover we do have is usually related to high school or college students graduating and moving on to something else. The consistency and quality of the staff has been the major factor in our success.”

The North May store was originally one bay, but the overwhelming success from the first day required that they expand into the adjoining bay 10 months after opening. The problem was that the tailor who occupied the bay didn’t want to leave.

Mays laughs at the memory. “We had to pay her a ‘relocation fee,’” he says. “She wasn’t going to move otherwise.”

Growth came quickly after that. Catering sandwich and pasta trays soon turned into specialty catering, and demand for easier access led to a Café 7 location in downtown OKC in 2012. A seasonal menu started at both stores in 2013 – mainly as a way for the chefs to flex their culinary muscles and avoid boredom, according to Mays. The north store expanded into a third bay in 2015 with the creation of Venue 7, and earlier this year, they opened a location on the campus of Love’s to provide lunch for the company’s staff.

Mays estimated that the north store alone has served nearly a million and a half guests in these 10 years. He paused after crunching the numbers. “We should say ‘over a million,’ I guess.”

The number he arrived at was 1.7 million, but Mays is nothing if not a humble son of a restaurant family – his mother has a catfish joint a half mile from the Red River that’s been in operation for more than 40 years. It’s where Mays learned the craft and the love of feeding people.

In May 2019 – or as close as possible – Mays and Kana will open The Hamilton in the Shoppes at Northpark, or what most of us call Northpark Mall. The dinner-only supper club and speakeasy will be a big departure from the model that got them where they are, but both partners are excited for the change. Mays and Kana both love bars, and they think Northpark is showing signs of renewed life. Also, it will give them a chance to do something they love: play in the kitchen to design a modern American menu that allows them to flex their chef skills.