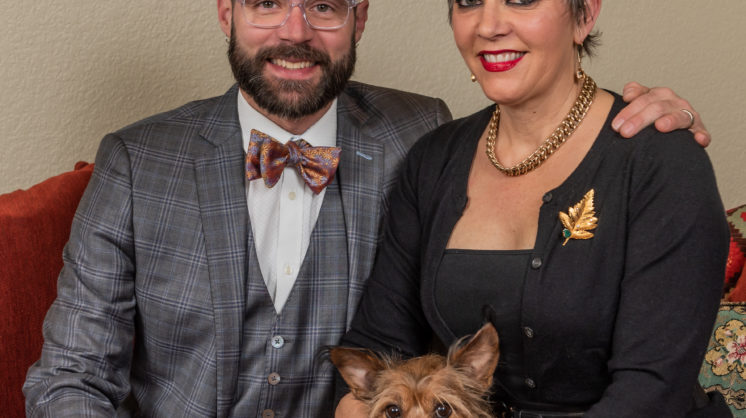 When Lin Sanchez recently became the fourth member of an established mahjong group in Oklahoma City, according to her friends, she elevated the weekly dinner and game to a new level.

No longer was it OK to serve pizza, or have “clean-out-your-fridge” night, said Cindy Miller, another member. Sanchez “upped the ante on presentation and food,” and has had a wonderful influence on the entire group. Another member, Debbie Nauser, agreed. “She does a beautiful job of entertaining, even when it’s just the four of us,” Nauser says. “She’s just really very, very creative and innovative and makes everybody feel right at home.”

Sanchez, Miller and Nauser also are in a Sunday brunch book club, for which Sanchez usually hosts the Christmas meeting. A typical meal includes her mother’s hot curried fruit dish, served alongside ham, and her peppermint-dipped meringue cookies. Sanchez’s recipe for meringue cookies is cut out of a magazine and pasted on paper to go in her well-worn, spiral-bound notebook of recipes. Handwritten under the cut-out photo is “WOWZERS!! IS THIS GOOD!!!” – with the extra exclamation points emphasizing her enthusiasm for the recipe. Other recipes she uses when she entertains are dotted with drippings, asterisks and more marks that indicate lots of use through the years hosting friends and family members.

Sitting in the living room Sanchez shares with her husband Ernesto, it is easy to sense the couple’s welcoming spirit that Nauser and Miller described. They offer tea and scones to a guest and talk about why the items in their home mean something to them. Lin Sanchez is owner of Paseo store Su Casa, which offers needlework and classes, antiques and art. Ernesto Sanchez is head of exhibition design and installation for the Oklahoma City Museum of Art, and also is an artist.

Their home in the Waterford complex, where they have lived for more than two years, is filled with art and color and light, and items that they have collected through the years. These include estate sale finds, furniture that connects them to family, needlepoint items and homages to Ernesto’s roots in Monterrey, Mexico, as well as those of Lin, who comes from San Angelo, Texas, and Oklahoma City. It also includes a small space with an antique prayer chair from her grandmother, and photos arranged in a shrine to beloved pets, including their dogs and Sunshine the Chicken – who showed up at their house one day and lived with them for the next nine years.

Outside, their garden greets guests with a gate covered in hyacinth bean vines and makes them feel they’re in a secret oasis of greenery and flowers far from the city. “I love feeling connected to my past,” Lin says. Of her needlepoint, she adds, “I feel very connected to my grandmother and my childhood when I do it … I’ve always felt like an artist, and it feels like I can express that with needlepoint.”

Together, the Sanchezes enjoy cycling, traveling, attending the opera, collecting – often through estate sales – the outdoors and more … anything that includes a “passion of life and creativity,” Ernesto says. Lin said that even though she isn’t a “day-in and day-out cook,” she loves to entertain and to offer lovely food, décor and flowers to friends and family. She even finds camaraderie and connection in cleaning up.

Miller said Lin Sanchez always makes everyone she hosts feel included. “She gets enjoyment out of making other people feel welcome and special,” Miller says. “I have met some of the most interesting people I know through Lin.”

Note: Use food coloring gel in a squeeze bottle or a food-safe paintbrush to make lines in the piping bag. Once meringues are cooled, store them in an airtight container at room temperature.

Paint three or four evenly spaced thin strips of red food coloring gel on inside of a decorating bag, starting at tip and ending three-fourths of the way up bag. Gently spoon meringue into center of bag, filling three-fourths full. Snip end of bag. Pipe about two tablespoons meringue onto one parchment paper-lined baking sheet, leaving one inch between each cookie. Repeat with remaining meringue, using a clean bag for each batch.

Bake at 200 degrees for two hours. Turn off oven, and let meringues stand in oven until completely cool (about three hours).

1 can (16 oz.) each: peaches, apricots, pears and pineapple chunks

Ernesto and Lin Sanchez with their squirrel terrier Lucy.

When she entertains, Lin Sanchez builds colorful centerpieces out of items she has on hand. This Christmas display includes her dad’s baby sandals, dipped in copper long ago.

Art by Ernesto Sanchez flanks the buffet in the Sanchez entryway, which also includes a ceramic horse sculpture from the home of Sanchez’s grandmother.