Catching Up With the Joneses 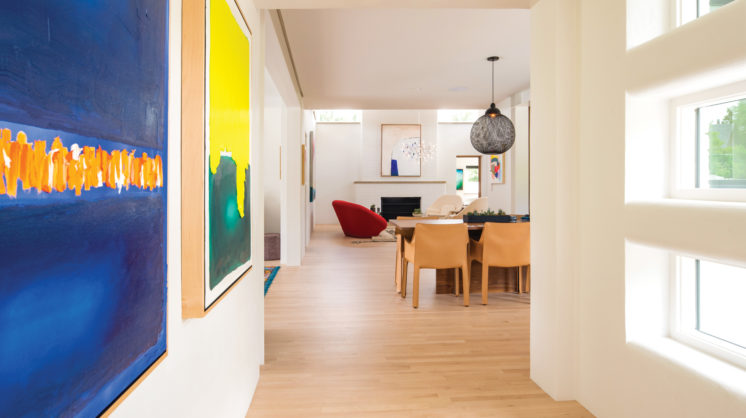 Kyle Jones and his wife Kate took a trip to the Cayman Islands last winter. But after just a few days in paradise, they were ready to head back home to Oklahoma. The sun on their backs and sand between their toes could not compare to their dream home waiting for them on a quiet tree-lined street in Nichols Hills. 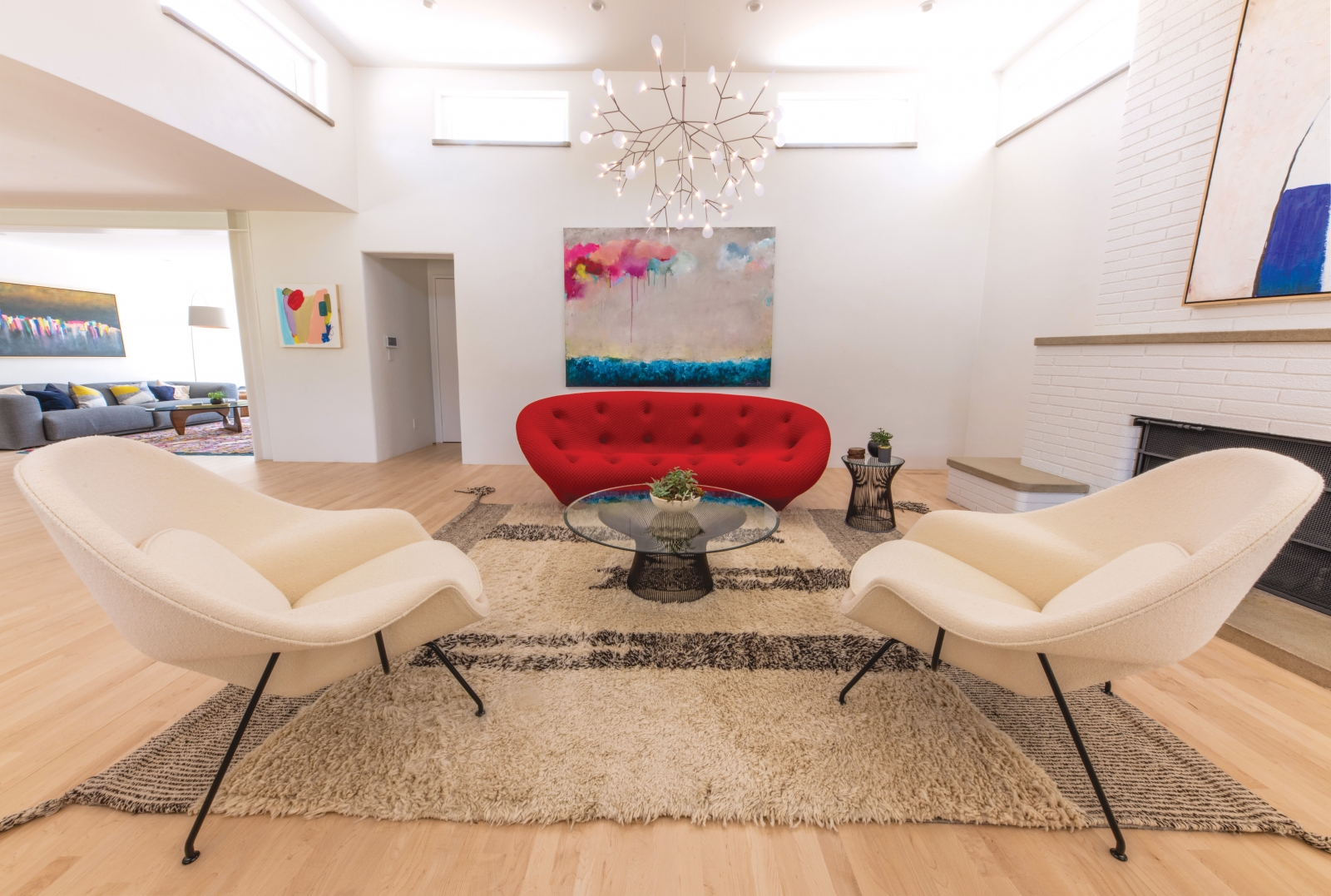 The couple purchased the vintage 1947 home about five years ago, and knew immediately that it was just what they had been dreaming about for themselves and their 7-year-old daughter Ramsey.

“We were living in Deep Deuce, but I really wanted a larger home where we could entertain,” Kyle says. “We knew we wanted a modern-style house, but we didn’t quite know where our journey would take us. My dad is the first one who showed us this house online.”

After viewing the property on Zillow, Kyle and Kate said they were not impressed. 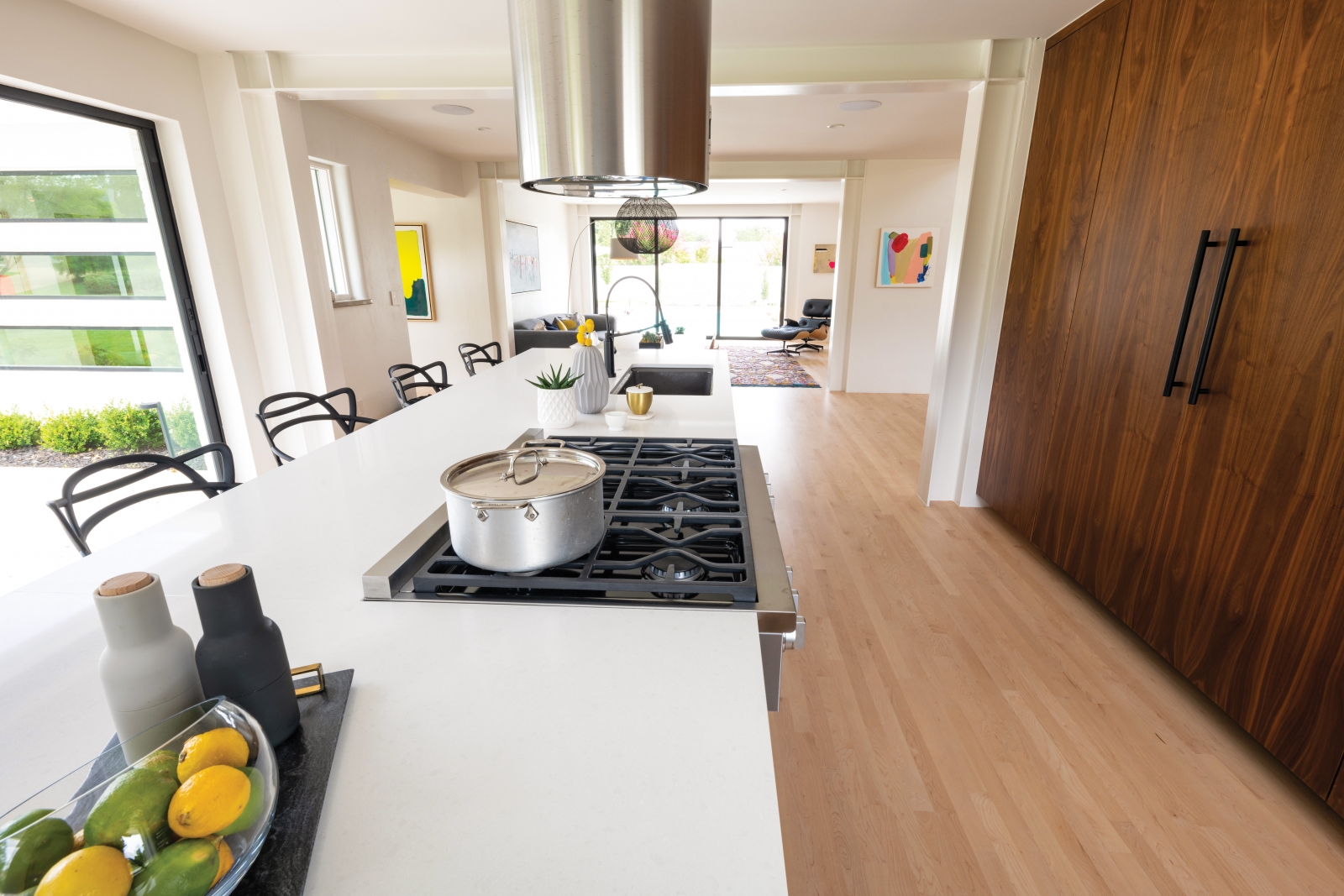 “I thought ‘there’s no way I’m buying that house,’” Kyle says. “But one Sunday, I told Kate we should drive by the house in Nichols Hills. We got to the corner and I looked at the house and saw all the pine trees, and we were both thinking, ‘Okay, get rid of the trees and that could be cool!’

“We knew it would need a lot of love and attention,” he adds, “but we thought it could be something that’s totally unlike anything else in Oklahoma City. From that point, we called the realtor and started negotiations. It took seeing it just one time from the street to know it was going to be our house.”

The house had been remodeled once around 2008, Kyle said. Parts of the original 1947 structure had already been updated, but it still wasn’t exactly what they thought it could be. 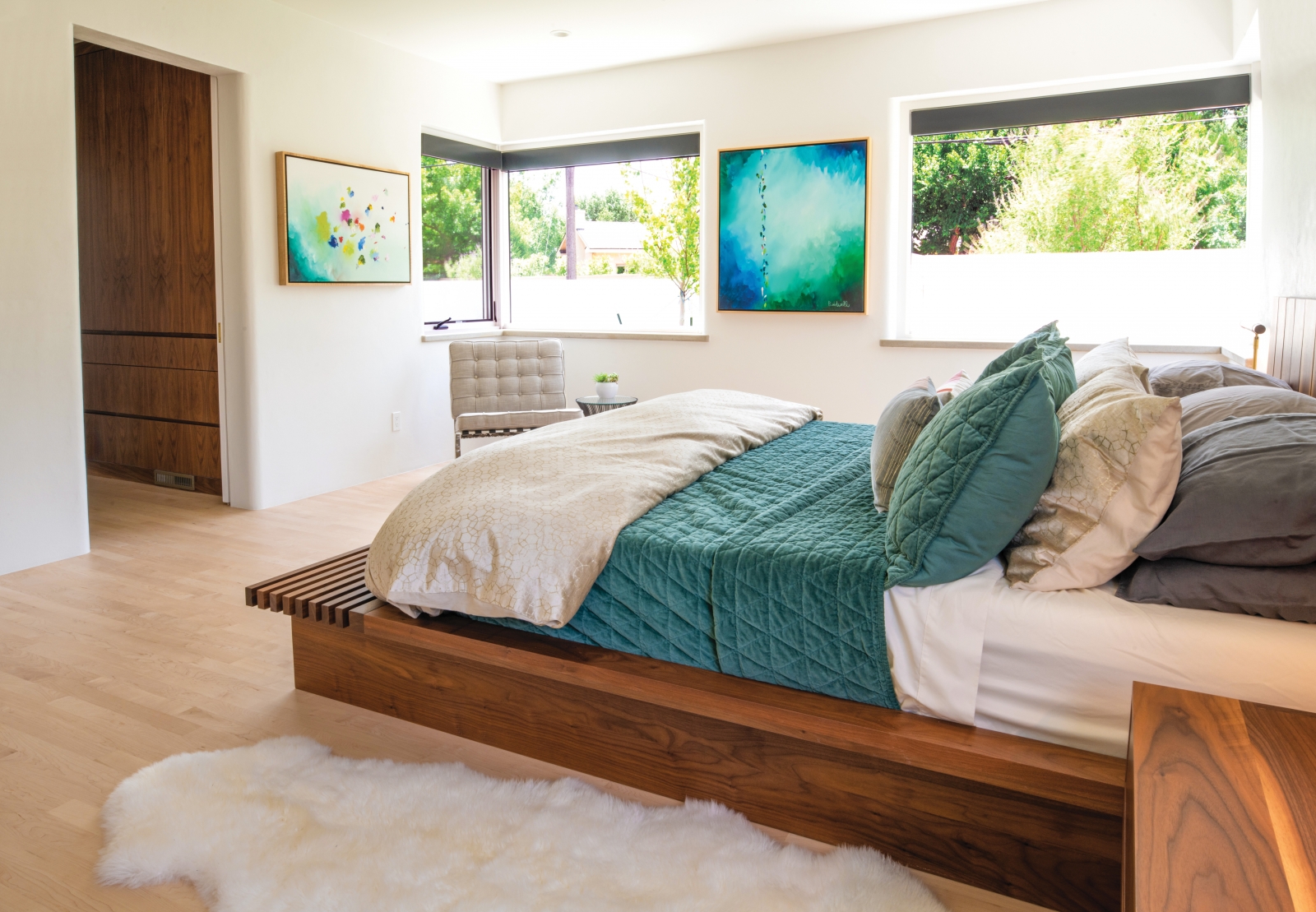 “After living here a couple of years, it gave us an idea of what we wanted and how we thought the house should function,” he says. “It was a great house, but was just missing the icing on the cake, so to speak. Our architect, Jeremy Gardner, said if we really wanted to do something special, we could start knocking out some walls. He said that would change the whole house, so we decided that’s what we would do.”

The design process took two years; working with Gardner Architects, to create the new space – and then with contractor Brent Swift, who put the plans in motion. 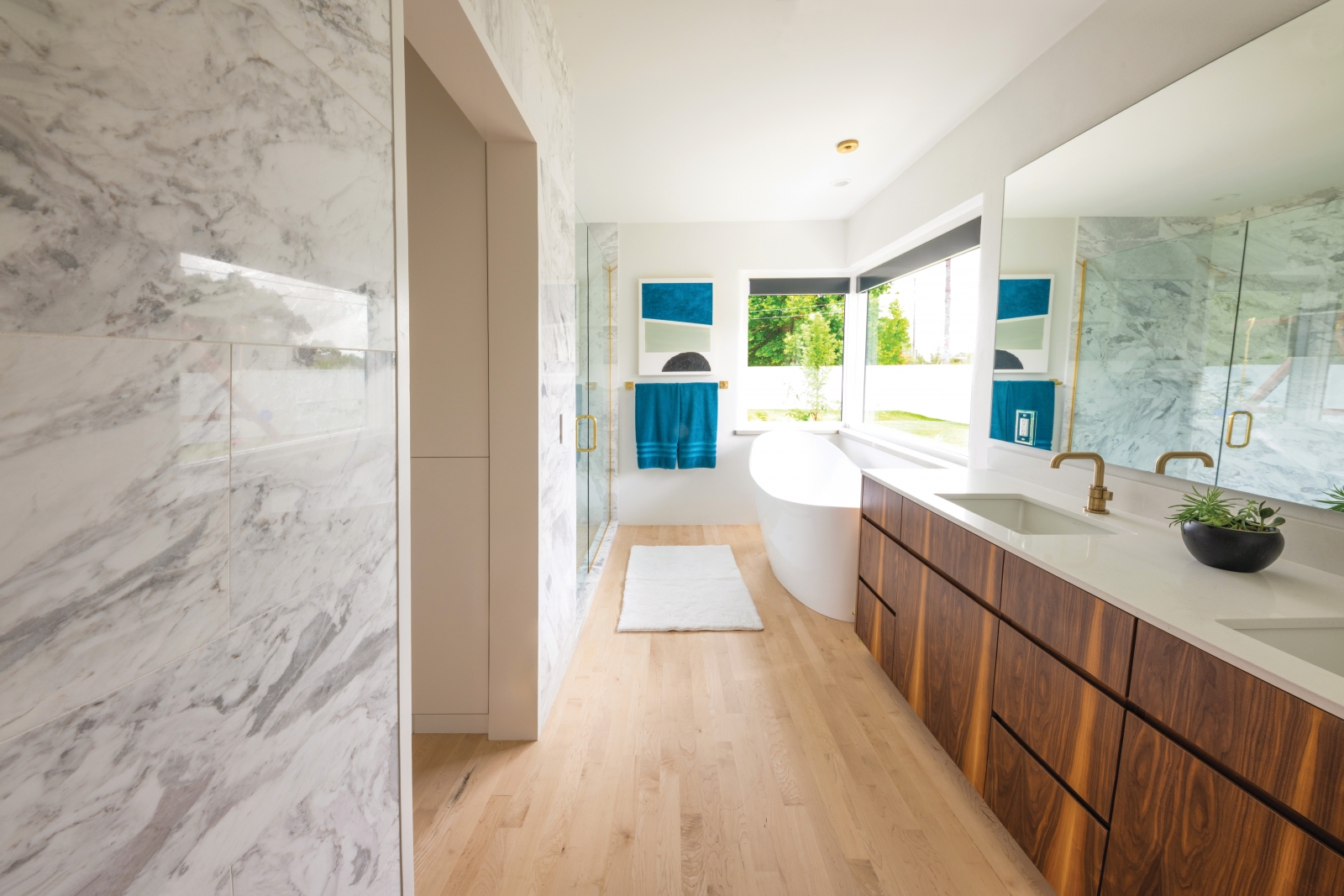 “The renovations took a full year,” Kyle says. “So we moved out and back into our old house in Deep Deuce, which we had turned into a rental property. During that time, Brent and his crew ripped out walls, added windows where there were none and totally gave the house a whole new feel.”

For guests, walking into the house is like stepping into 1960s-era chic. The furniture fits with the Jetson-esque style of the home. A fireplace to the right encompasses one full wall, while the fire-engine red sofa is the focal point, grabbing the visitor’s eye from the moment they step inside.

“In our living room, we didn’t do much here,” Kyle says. “We just added new lighting and new paint. Before, the fireplace had been painted black, so we lightened that up and gave it a new look. We decorated in a Mid-century modern style, because it not only fits the house, but that is what we like. For us, it is about clean lines; keeping it simple with no clutter, no excess. Mid-century modern was a classic staple of furniture that should have never gone away. It fits our personality.”

The house was originally four bedrooms in a Jack-and-Jill style. Kyle said that for the master, they took part of a second bedroom and created a large en suite. The bedroom is decorated in shades of ivory, teal and emerald, complementing the dark walnut furniture.

The en suite itself is classic, with just a touch of whimsy. The large free-standing tub has no plumbing, except for the drain. A copper fitting directly above the tub allows water to spill in a single stream from the ceiling into the bath. 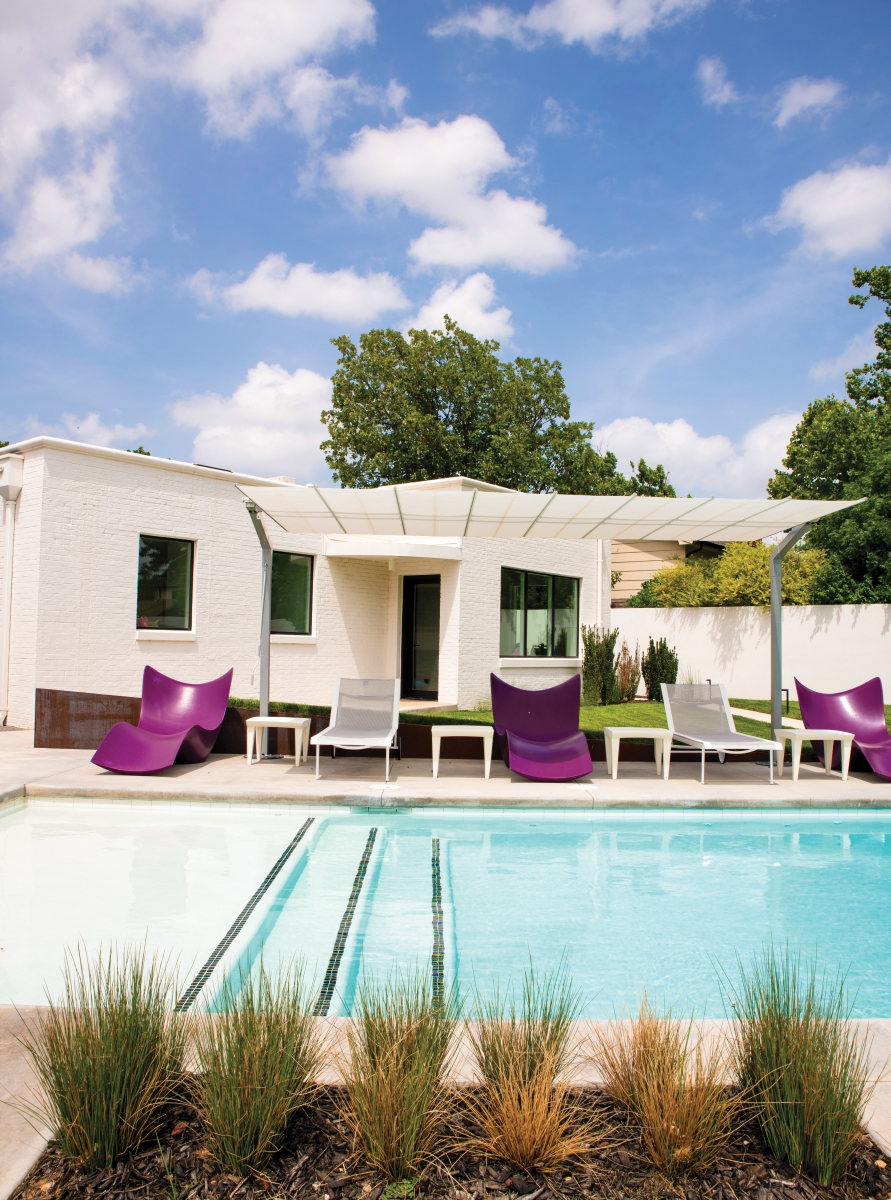 “We wanted to do something fun in here,” Kyle says, “So we ran the plumbing overhead. Plus, we didn’t really like any of the tub fillers we saw, and because the house is all concrete, it was going to be difficult to get the plumbing in here. We thought that would just be something cool to add.”

The floors throughout the house are blonde maple from Wisconsin, kept as light and natural as possible. In the kitchen, a continuous wall of black walnut covers the pantry, a large freezer and refrigerator.

“You can see the grain actually matches,” he says. “The countertops are white polished quartz. The snack bar we use for casual meals, because it’s just the three of us and it makes cleanup easier.

“The kitchen used to be very closed off. We removed a wall and used that extra space for an added living area. Now the kitchen flows better, it’s more open and light. We added a wall of doors opening out into the backyard, which gives us a nice view of the pool area. For us, having a visual from front to back is a nice part of modern-day houses.”

The area off the kitchen was once part of a bedroom, and now functions as a second living area. A hidden panel hides a wet bar, a nice feature when the Joneses entertain.

“We love having people over,” he says. “Maybe doing ‘family and friends’ things in the pool and having a good time together. That’s what we enjoy. This area overlooking the pool was a concrete block wall with a single window. We opened that up and installed a wall of glass doors leading outside. It also adds more light, and a much more open and spacious feeling.”

The Jones family had a special guest recently: The daughter of the original owner came by to see the renovations to her childhood home. 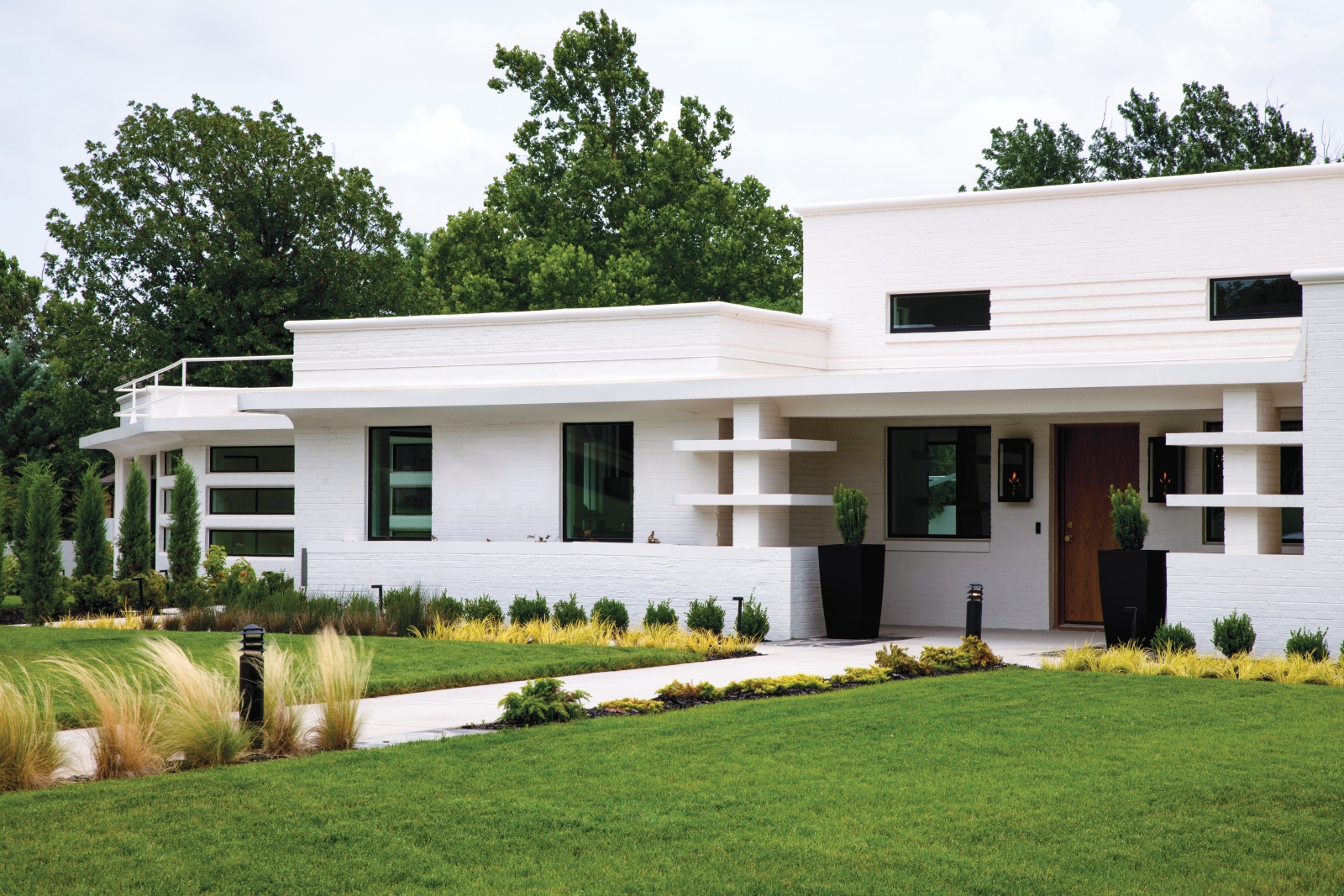 “The lady’s father had built the house in 1947, and used concrete throughout — because back then, he wanted it to be fire-resistant,” Jones says. “She is 87 now and really liked what we had done. I told her our goal was to maintain the integrity of the house. But we wanted to bring it up to date — take whatever that person who built it in 1947 may have wanted if they were to build the house today. What would they have done now? What design elements would they have incorporated? That was kind of our motto throughout the whole process. She said she thought her dad would approve.”

A long corridor off the kitchen leads to the garage, and is flanked by another wall of glass.

“This was a Florida room at one time – open space that had cinder blocks and was all open-air,” he says. “We added windows to enclose it and added heat and air to give us added square footage, as well as a powder bath. This gives us a place for guests to use, and we also added another bedroom, which we currently have set up to function as an office.”

Out in the garage, the contractors extended the space and added a much-needed storage area. Since the home has no attic, storage space was scarce. A separate mother-in-law apartment off the garage offers yet another living area, complete with its own full bath and kitchen.

The large, heated pool is the focal point of the back yard, and an amenity the couple decided to add during the renovations.

“Last summer was our first year to have the pool,” he says. “We went really hard in May and June, and by July we were already exhausted. Lots of friends came over to grill burgers and play in the pool. Our daughter loves it, and in Oklahoma, you don’t usually go outside in June or July unless you have some sort of body of water to get in. It’s just too hot here. After a long day of work, it gives us a place to go as a family and turn on some music and have dinner. We are pretty simple, easy-going people.”

Landscaping the property was the job of Laud Studio. They removed more than 30 overgrown trees and brought in several trucks of new soil. New elm trees now shade the front lawn, which is covered in a lush fescue. 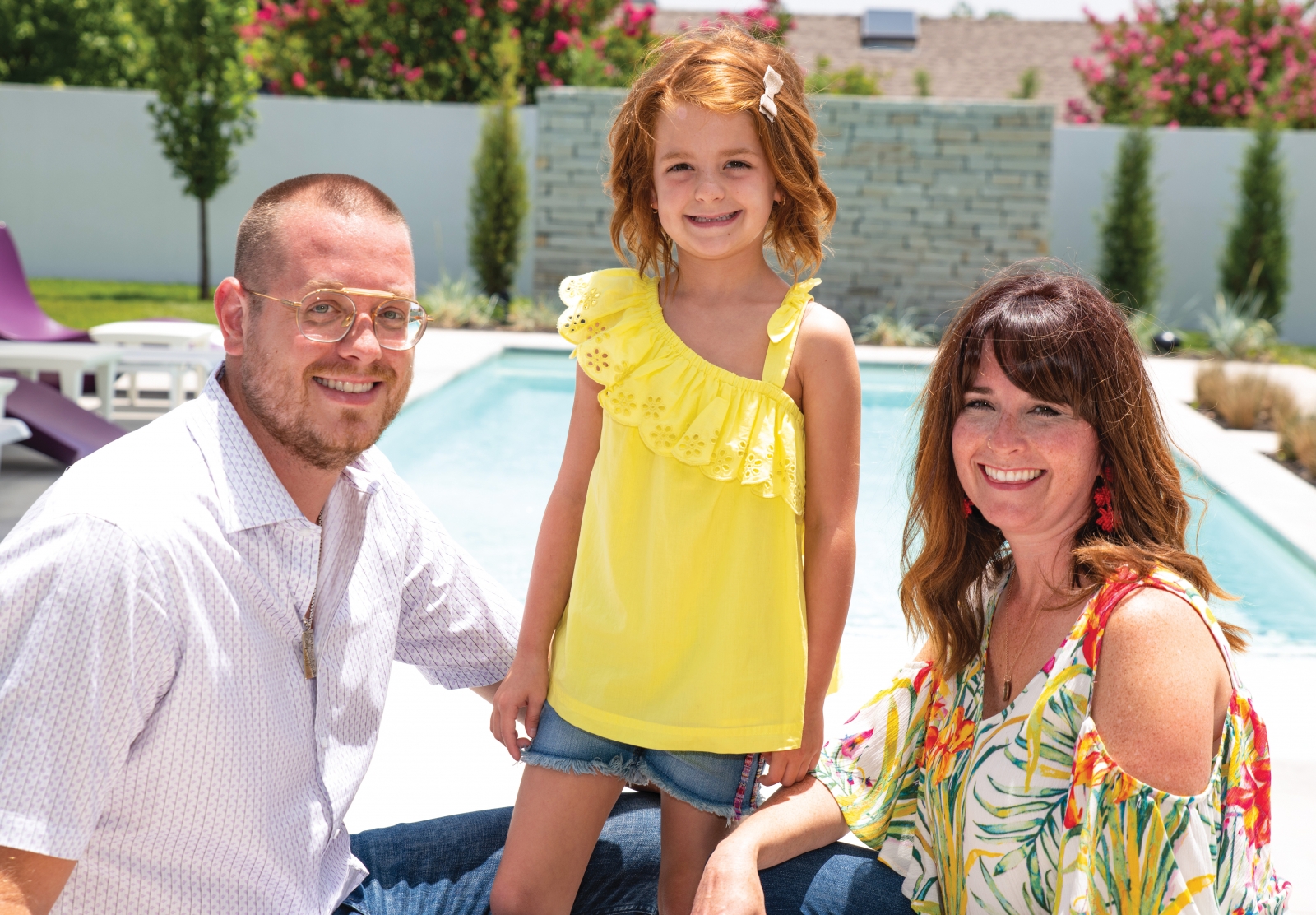 “We have some annuals and hydrangeas that add color in the spring and summer,” Kyle says. “But this is not really the kind of house where you plant 500 begonias. The house is the focal point, so the landscaping just enhances the clean lines of the structure.”

The first six months living in the renovated space was like being on vacation every day, the couple said.

“We would look at each other and kind of think, ‘We have our own little private resort here,’” Kyle says. “There are times we want to pinch ourselves to see if it’s really real. We went on vacation in February and had a great time, but my home has all the same amenities we had in the Caymans. And it’s my own home and my own bed at night, so we both couldn’t wait to get home. We get up in the morning, head for our espresso machine and it just feels like we are on one long vacation. We are very blessed.”