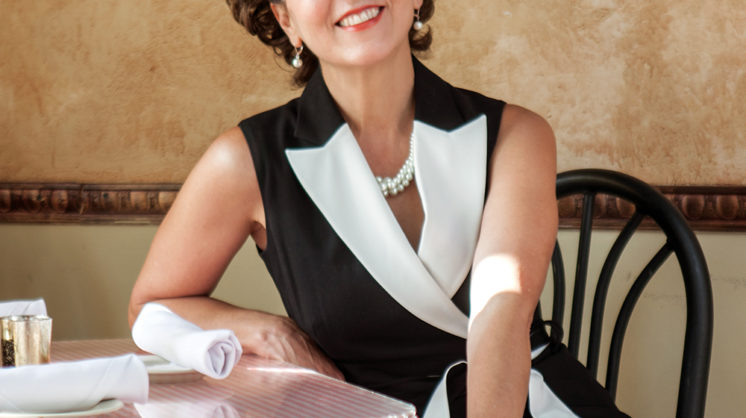 Red checkered tablecloths, old family photos, the ever-present scent of simmering garlic … the quaint little Italian bistro known as Vito’s does a good job of making its space in a strip of businesses on North May Avenue feel like a trattoria on the Amalfi coast. And in addition to the excellent cooking of family recipes, one of the not-so-secret ingredients of its success is its proprietor, Cathy Cummings.

“Hi, how are you?” she exclaims, greeting every visitor with friendly, gregarious charm. “Welcome to Vito’s! I’m so glad you’re here!”

And there’s more to Cummings than her skills as a chef and restaurateur. At one time, she was a single mother to three daughters under the age of 7, working multiple jobs to make ends meet. She has been a candidate for Oklahoma’s Lt. Governor, and this spring ran a successful campaign to become the newest member of the Village City Council. She sat down with us – for a moment – to chat about life, politics and garlic.

What is the Cathy Cummings backstory – where are you from originally? “I’m originally from Kansas City, Missouri, but I’ve lived in Oklahoma about 18 years. I am married to the newly crowned King of Bacon, Sean Cummings, a.k.a. the Irish Pub guy. We have five grown children, and all are now in college. Raising five kids in a blended family was quite an undertaking – but everyone is still alive.”

How long has Vito’s been around? “We opened in the summer of 2003. My family had been in the restaurant business all my life, so it was a natural fit for me. Using my family’s recipes has made it even more special. It truly feels like a big Italian Sunday night dinner with my family, every single night.”

The name Vito’s sounds like it could have been inspired by The Godfather. How did you come up with that? “The story behind the name is actually quite funny: To purchase a new outdoor sign was going to cost me about $7,000. Or, I could use the letters from the previous tenant’s sign for next to nothing. In the mix of letters available, I came up with Vito’s – and I actually do have an Uncle Vito, so it all worked out. (And to be perfectly honest, I was just cheap!) But, as my dad would say, ‘It was just good business sense.’”

And the recipes are from your mom? “Yes! I had an old recipe box from my mother. They were stained and well-used; they had been passed down from her mother. So my challenge  was to take those recipes and turn them into commercial recipes. Just like in Italy – wherever Italians landed in America, they adjusted their food to whatever was available and what was fresh. What we found is that some items worked from our home kitchen and some didn’t. But the fun is when you go from a pinch of this and a handful of that, which is what many of the recipes said, to cups of this and pounds of that.”

Politics seems like a big departure from chicken carbonara; how did you become interested in government? “My parents’ restaurant was right across the street from City Hall, and my friend’s dad was mayor. He was fantastic, bigger than life. The people that came through my family’s restaurant every single day were the movers, shakers and decision makers of Kansas City. They were all good people doing good things, and I got to see them do good things up close and personal. So I never had that negative view of politics. Then I started to see the negativity in Oklahoma, and I didn’t like the way it was going. I wanted someone to step up and help fix it, but nobody did. So I thought, why not me? Everyone waits for someone to save them. I looked at our Legislature and thought, ‘They’re no smarter than I am. They are no more well-known than I am. Most of them don’t have business sense like I have. My kids were grown. Why not me?’”

A couple of years ago, you walked thousands of miles across the state in your bid for lieutenant governor. What was that like? “I visited every single one of our 77 counties. I talked and met with business owners, and anyone I could meet and shake hands with, I did. I kissed a lot of babies, went through many pairs of shoes and lost a lot of weight, but it made me fall in love with Oklahoma even more.”

Oklahoma has become increasingly conservative in its politics in recent years; do you see the pendulum ever swinging back the other way? “No doubt about it. I honestly have nothing against Republicans. They were an excellent opposition party for a long time, and what they have found is that it is very difficult to be the party that is completely in charge. If everyone were to be completely honest, we would get better government from a healthy mix of Democrats and Republicans. [Moving from] the one extreme to the other has not proven to work.”

Finally, what is your own personal opinion – can there ever be too much garlic? “There are two things my mother told me that I always live by: Never leave the house without wearing lipstick, and there is no such thing as too much garlic.”