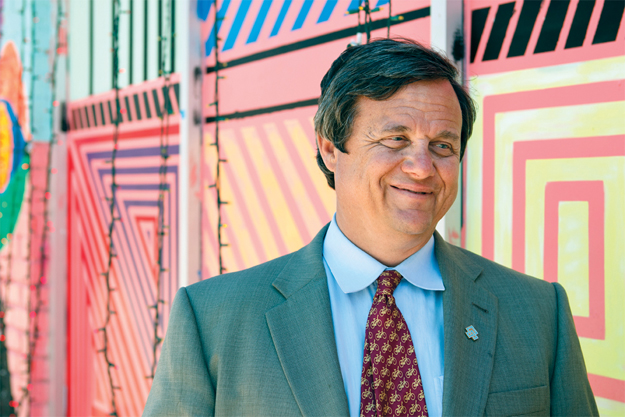 When Downtown OKC, Inc. hosts the 26th annual Dean A. McGee Award ceremony on May 16 at the Skirvin Hilton, it will honor three visionaries who have left lasting imprints on the heart of Oklahoma City: John Michael Williams, Richard “Dick” Sias and Steve Mason.


“These three honorees have humbly displayed visionary leadership and extraordinary dedication to a downtown we are proud to call home,” says event co-chair Dave Lopez, Oklahoma’s secretary of commerce. “All of Oklahoma City and future generations greatly benefit from the actions and decisions made by John, Dick and Steve.”

Attorney John Michael Williams will receive the Dean A. McGee Award itself, which recognizes individuals for a lifetime of contributions to downtown. Williams, an Oklahoma City native, attended OSU for his undergraduate degree and then OU Law School, and as a partner of the law firm Williams Box Forshee and Bullard, he has been a “behind the scenes” presence of every major downtown revitalization project for more than 30 years.

Richard L. “Dick” Sias is being honored with the Stanley Draper Award for community excellence by an outstanding staff or volunteer of a nonprofit group or non-elected government employee. Sias left his native Kansas and relocated to Oklahoma City in the mid-1950s, where he met and married his wife Jeannette. He has served on the board of almost every major arts organization in the metro area, including Ballet Oklahoma, Canterbury Choral Society, Lyric Theatre and most notably, the former Oklahoma Symphony Orchestra, now the Oklahoma City Philharmonic.

Engineer, businessman and developer Steve Mason receives the Neal Horton Award, presented annually to a visionary who creates a renaissance in a downtown area. Mason grew up in Oklahoma City, left the state to attend college and chose to return during the oil bust days of the 1980s. He moved his firm, Cardinal Engineering, to the Automobile Alley area, and was instrumental in doing the same for the Oklahoma City Community Foundation, of which he now serves as President. Mason has developed the area of Ninth Street east of Broadway into a thriving urban destination.
Slice talked with each of this year’s honorees in wide-ranging conversations about downtown Oklahoma City’s past, present and future.

What are your earliest memories of the downtown area?

Williams: “At Christmas, my parents would take me downtown to Main Street and we’d drive down Main from Classen and look at the Christmas lights. I remember going to John A. Brown’s department store—I knew exactly where the toy department was located. When I got a little older, I enjoyed going to the downtown YMCA and playing water polo.”

Sias: “At that time [mid-1950s], we had a growing downtown. The center of town then was Park Avenue and Broadway. Downtown was busy… there was always something going on. But then, urban renewal killed downtown in the ’70s when they tore down all the classic buildings and didn’t replace them with anything. Then we had the various economic downturns and flight to the suburbs, and that certainly didn’t help.”

What was your first involvement with a downtown improvement project?

Williams: “I was involved with the early planning stages of the original Myriad Gardens, even before the Crystal Bridge. I believed downtown should be a place where everyone could come together, and downtown belongs to all sections of Oklahoma City. It is common turf, and I liked that concept. Downtown is everyone’s neighborhood.”

Sias: “I went on the board of the Oklahoma Symphony Orchestra in the ’70s. There were some tough times, but the Philharmonic has re-emerged to be much better. In the old hall, you couldn’t hear the orchestra due to the stage set-up and acoustics. The musicians couldn’t even hear each other. Now, you can actually hear it. The reason I’m so pleased with the new Civic Center is that the votes that passed it came from areas of Oklahoma City that we sometimes ignore: the south and east sides. The everyday citizen voted for civic improvement.”

Mason: “I went on the board of trustees of the Oklahoma City Community Foundation about 10 years ago and was involved in the decision for the organization to move here. Then a friend and real estate agent told me we needed to buy the 1015 N. Broadway building and flip it in 90 days for a $100,000 profit. I ignored his advice and kept the building. As for Ninth Street, we originally purchased it to be a parking lot for Cardinal Engineering at 10th and Broadway. Then my business partner Robert Painter suggested we reopen Iguana Grill. That was the step that led to saving Ninth Street. We found four old buildings that had never been demolished. We had an internal discussion about whether to remodel the buildings at a cost of 20 percent more, or to tear them down and start fresh. We decided to spend more for the ambiance. About half of my friends thought that was a silly idea, but in hindsight, people like buildings with character.”

What is most gratifying to you about being a recipient of this award?

Williams: “I’m surprised, I’m made humble, at being chosen for this. I know all the prior recipients, and it’s a wonderful honor to be included in that same category. It makes me think that perhaps some of what I have done has been the right thing. I wish my parents were still living to see me receive it. I think they would have been very pleased.”

Sias: “When they first told me I was receiving the award, I thought, ‘I’ve never done anything for downtown.’ But I started thinking about it, and I realized, ‘Maybe I have.’ I just want the focus to be on the arts.”

Mason: “It’s exciting. We do things because they are the right things to do. It’s nice when, after the fact, other people agree that it was the right thing to do. The award is just the cherry on top. But the real award is seeing all the cars and people down here at night.”

What do you envision for downtown Oklahoma City, moving forward from today into the future?

Williams: “Bricktown, the river, the Skirvin Hotel, the Thunder, the Devon Tower… all these things mean people know who we are as a city. At the Thunder games, I see people from all walks of life. It goes back to my original concept that downtown is common ground, that it is for everyone. I believe this idea will continue to grow and expand.”

Sias: “In the last 15 years, we’ve become a city again. For a long time, we really weren’t a city. Core to Shore is a good plan. It’s going to be an incredible addition. The Thunder and the Devon Tower define our downtown now. We needed icing on the cake, and that’s it. We’re seeing a renaissance that is unheard-of. I went downtown for a lunch recently, and it was so busy I couldn’t find a place to park. Isn’t that wonderful?”

Mason: “I like this environment. It feels good to be down here and to be a part of a large group of people who are down here. There are parades and runs on Broadway. We’ve built a good area that is attracting people. City Arts Center recently announced it is coming to 12th and Broadway. There’s Allied Arts and deadCenter… it’s all about the environment. Empty areas will keep being redeveloped. This entire urban core is spiraling upward. Success begets success.”

The Dean A. McGee Awards, presented by Downtown OKC, Inc., will be held on Wednesday, May 16 in the Skirvin Hilton Grand Ballroom. The black-tie evening begins with a reception at 6pm, followed by dinner and the awards presentation at 7pm. Advance reservations are available by calling 235.3500 or emailing rsvp@downtownokc.com.