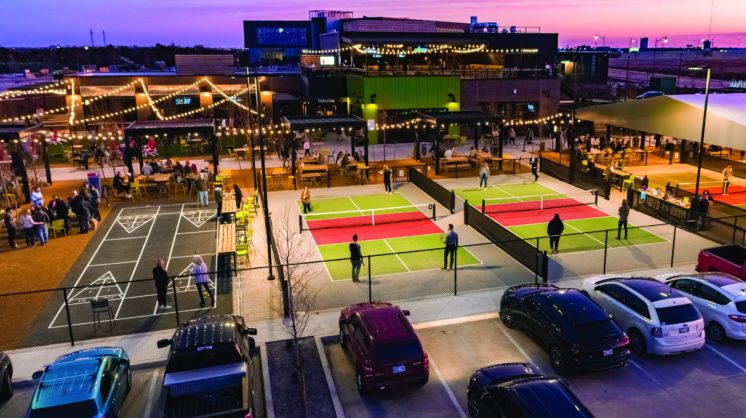 When thinking of Oklahoma City’s sports scene, you’re bound to start by thinking about basketball, baseball or soccer due to the Oklahoma City Thunder, Dodgers, and Energy FC taking most of the headlines and attention—not to mention the University of Oklahoma and Oklahoma State University football programs. While those sports are undoubtedly the most popular in the city, the popularity of pickleball has grown behind the scenes.

You may not know a ton about this combination of tennis, badminton, and table tennis, but pickleball head pro Andy Gensch, from Chicken N Pickle, can help familiarize you with the sport.

Pickleball was invented in Bainbridge Island, Washington, in 1965 and was primarily played in the Pacific Northwest for the next 40 years. The sport eventually expanded, migrating south through the Sun Belt states and thriving in retirement communities. The expansion has been tremendous, and it is now the fastest-growing sport in the country.

More than a hobby

It’s a fun weekend pastime, but also unquestionably a professional sport, and it’s growing in its popularity.  Pickleball now has two professional tours, and the first national championships were held in 2009.

“The sport’s tremendous growth and popularity stem from how easy it is to learn and that anyone can play it,” said Gensch. “It can be as social or as competitive as you like.” Oklahoma City has been a hub for pickleball in the midwest for years now. Gensch remembers playing in the Oklahoma State Games six years ago and said they were very competitive.

The OKC Pickleball Club now has more than 1,500 members. With Chicken N Pickle choosing Oklahoma City as one of only four locations in the U.S., and country clubs and public parks converting tennis courts to pickleball courts, it’s safe to say that pickleball has made its mark in the 405.

Having opened its OKC location at 8400 N Oklahoma Ave. in the last year,  It does wonders for the atmosphere and attracts people interested in pickleball, and makes them new fans.

Typically, the courts at Chicken N Pickle are busy in the evenings, with different leagues and reserved play occupying the space.

While pickleball is the core of Chicken N Pickle’s activities, there are other things to do at this establishment that may interest locals as well: Bocce ball, shuffleboard, Jenga, and ping pong are just a few games that keep patrons active.