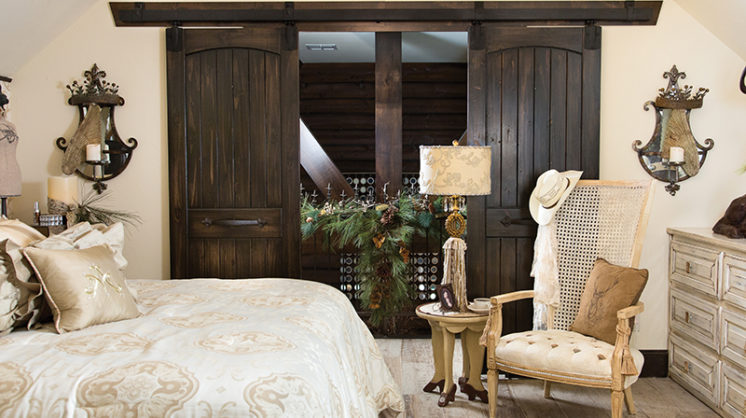 Cindy Kottwitz wasn’t raised in a barn … but she lives in one now. It’s a very civilized, chic, overtly girly interpretation of a barn that she had custom-built in 2014, but a barn nonetheless. It’s outside Kingfisher, on her family’s land. Her daughter lives a few hundred feet away, and her brother is just up the gravel road toward town.

The Kottwitz family has been farming its land, hundreds of acres outside Kingfisher, for four generations. “My brother will say our family has been sharecroppers,” Kottwitz says. “I’m a sharecropper, because my brother does the farming. It’s mainly wheat. We are right in the heart of wheat, cattle and oil country.”

She’s peppy, no bigger than a minute and thrilled to live just a stone’s throw from her beloved daughter Carly and her husband Clinton – and her grandchildren, Brandt and Keely. Kottwitz is an interior designer, currently working a few days a week for Hoffman’s Furniture in Moore.

Living in a barn is a long-held dream for Kottwitz, one that began when she was a little girl showing livestock. “We showed cattle and other animals. When you’re involved in livestock showing, you literally live with your animals. When I was little, I said I needed a barn with a downstairs for my animals and an upstairs for me.”

When she finally had the chance to create her dream home, she drew out her plan, took it to an architect and had it built in nine months. “It took a long time before I was able to do this. I knew I had to build it on my own land, because I’m thinking there is very limited resale value here,” she says, laughing. “I collected things for my dream house for five years. The first thing I bought were the cattle pictures in the kitchen. The whole kitchen area was designed around those pictures.”

If cattle are in her blood, so is interior design. Kottwitz’s grandfather owned Kingfisher’s furniture store, McCully’s, for many years. When he passed, McCully Schwarz Furniture was born, owned by her beloved Aunt Ida, who inspired Kottwitz’s creative side. “I’ve done creative things all my life. I had a dance studio, I’ve been a designer, and I love to re-do my little house, which I do constantly for each of the seasons.”

•The upstairs loft houses a beautiful bedroom bedecked in shades of ivory, a plush bathroom and a balcony. The floors are distressed and whitewashed, and an occasional table wearing heels makes its home next to a rattan-backed armchair. 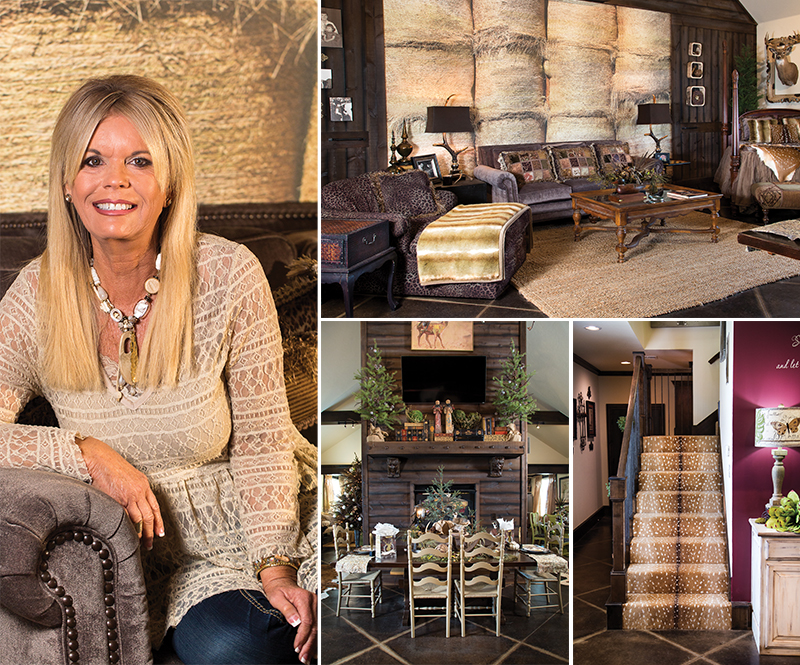 • The downstairs is one 1,800-square-foot room, divided by the fireplace. There is a bedroom upstairs in the loft, but Kottwitz reserves it for guests and grandchildren, preferring to sleep downstairs in her romantic poster bed. Her decorating style, which she has dubbed “Prairie Chic,” is evident in the (extremely) oversized photos of round hay bales behind the couch. A family heirloom, a 65-year-old show box used for generations at livestock shows, serves as a side table.

• The stairs leading up to the loft are covered in a carpet festooned with the spotted pattern of an Axis deer.

• The formal dining area occupies one side of the fireplace, and its rustic wood is the perfect foil for the stained and scored concrete floors, whose gently burnished finish keeps them from looking even remotely industrial. Cindy has a knack for mixing textures and colors. “I love combining furnishings that are very civilized with things that really bring the outdoors inside,” she says. She also loves Christmas and keeps a variety of discreet Christmas trees up year-round. 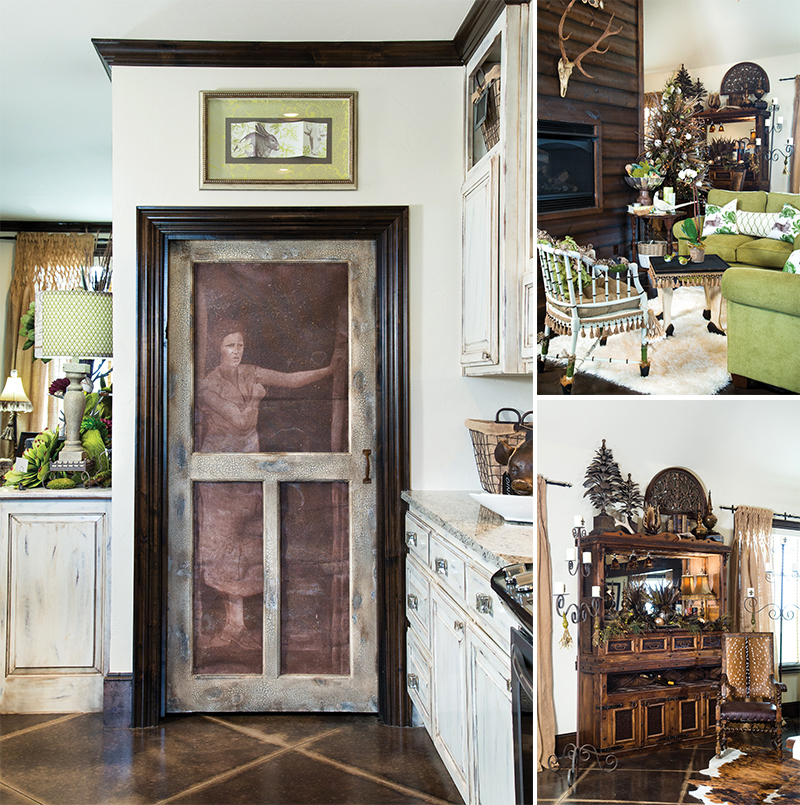 • A real screen door was pressed into service in the kitchen as a frame for a pioneer woman coming inside, maybe for a cool glass of tea.

• This more casual seating area is where Kottwitz’s whimsy has been unleashed. She’s created a “garden chair” with flower-pot feet, painted it to vaguely resemble a stand of Aspens and topped her creation with flowery pillows and a perky row of tassels. In front of the chair is another heeled table, also of her design.

• The window treatments throughout the downstairs are cleverly crafted from burlap, but they nearly sent the somewhat exacting Kottwitz around the bend when she first installed them. “I couldn’t get the wrinkles out of them. I steamed and steamed and was going a little crazy when my girlfriend told me about wrinkle-releasing spray. It worked like a charm.”

Between the now-wrinkle-free drapes is an antique bar, which the ever-resourceful Kottwitz obtained by trading a bed frame. The silver pitcher filled with feathers on the bar is another family treasure, a prize her father won in 1950 at the American Royal Livestock Show in Kansas City.

The wrought iron candelabra on either side of the bar were created by Kottwitz’s brother, who is a talented artist in his own right, in addition to being a fourth-generation farmer. 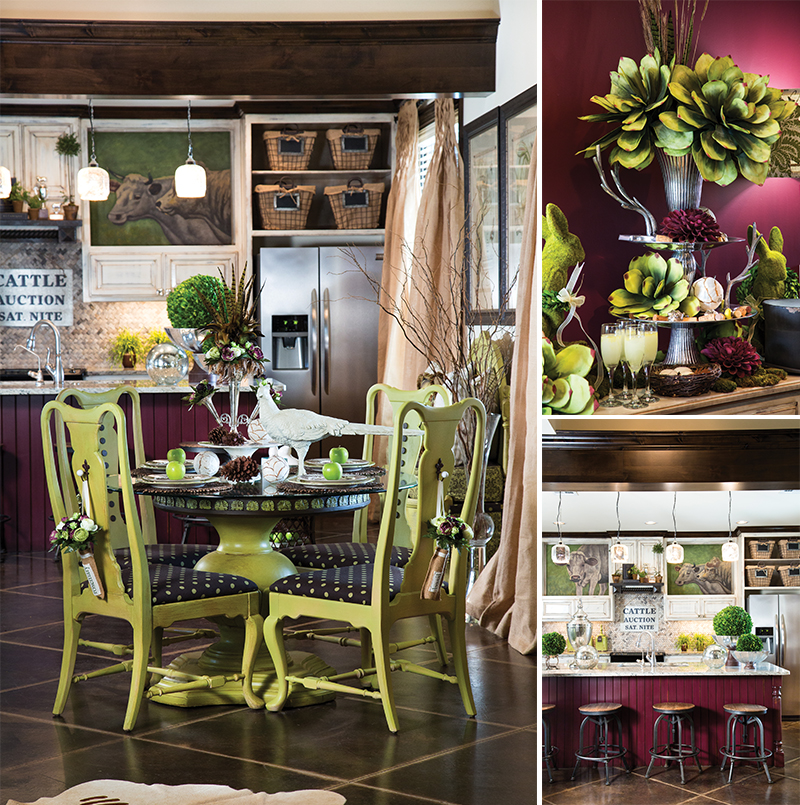 • If you tried to count the rabbits, pheasants and other fauna that exist in sculptural form in Cindy’s barn, you’d be hard-pressed to do it in a day. It’s as if the plants and animals of the prairie put on their tea-party best and moved right in. “My boyfriend says he feels like he can’t touch anything in the house and he hates that, but I built this house for me, not him.”

• Behold: the cows that started it all. The barstools in front of the barn-red island are new but look like they’re made out of some sort of farm implements. The kitchen cabinetry is done in a weathered wash, and the countertops are granite. “I really don’t do much cooking, but I do a lot of entertaining. This is a great space for entertaining.”

• The breakfast area is home to a chartreuse table and chairs, hand-finished by Kottwitz. “I got the table top from Evans Furniture when I worked there about 20 years ago. They were going to throw it away, but I asked if I could have it and just tucked it away until I needed it.”