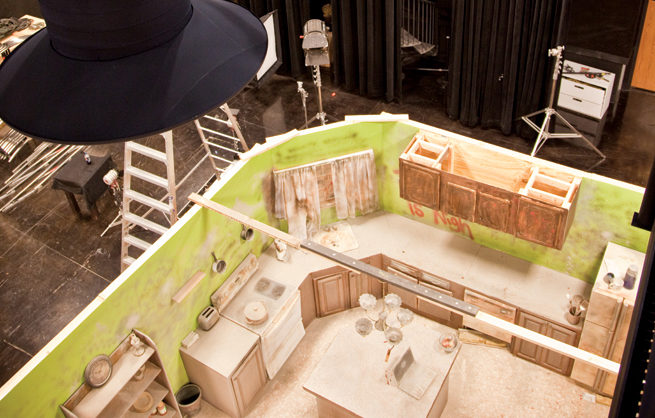 Going to California to light up the silver screen? Not so fast – OCCC, with help from Oscar winner Gray Frederickson, is making a compelling case for the Sooner State.

When talking about the film industry in which he has worked for more than four decades, Gray Frederickson makes one thing clear: Oklahoma is not Hollywood. Then again, that’s not necessarily a disadvantage, and Frederickson should know: he grew up in Oklahoma City, then made a career in Hollywood as a movie producer – including a Best Picture Oscar for “The Godfather: Part II” in 1975 – and now he has come full circle, having returned to his home state while remaining deeply immersed in the film world.

Frederickson’s modest office in the Visual and Performing Arts Building on the campus of Oklahoma City Community College is lined with posters of the movies on which he has worked, including the “Godfather” films and “Apocalypse Now.” He now teaches in OCCC’s highly regarded Film and Video Production program, which draws students from all over the United States, as well as leading the Oklahoma Film Institute (see “Going Deep,” page 50) and tirelessly promoting the benefits of Oklahoma to filmmakers. This is all while he actively continues to produce movies himself.

After moving back to Oklahoma with his wife and children – Frederickson had married and begun a family at age 52 – he helped to get the first tax incentives for film production enacted by the state legislature. But he also came to an inescapable conclusion: there needed to be a trained labor pool in the state in order for filmmakers to seriously consider moving their productions to Oklahoma.

He first contacted his alma mater, the University of Oklahoma, and while the university administration was on board with the idea, the logistics did not come together for the program Frederickson envisioned. He turned to OCCC’s then-president, Robert P. Todd.

“He told me, ‘That’s what we do in the community college,’” Frederickson recalls. “He said, ‘Come here and we’ll set up a program where we can train a labor force to work on movies.’ We started with 20 students and one camera and some equipment that was donated from Hollywood.”

That was in 2000. A dozen years later, the program sees 300 students per semester. All of the faculty, including Frederickson and Emmy-winning writer/director Greg Mellott, are working industry professionals. “Now, when a movie comes to town to shoot,” says Frederickson, “the first place they come is here. Our instructors work on movies, and so do many of our students. Our graduates have gone on to work all over the business. We see a lot of very talented kids, and they are doing some incredible things.”

The college has produced two exceptional documentaries on Senator Robert S. Kerr and the energy industry. In the summer of 2011, OCCC produced a full-length feature film, a comedy called “Just Crazy Enough,” directed by deadCENTER executive director Lance McDaniel and starring “Saturday Night Live” alumnus Chris Kattan. Around 10 professionals were hired… and the rest of the feature’s crew was all students.

It is little wonder that OCCC and OFI graduates are doing incredible things. OCCC’s current president, Paul Sechrist, is as supportive as his predecessor, and the college’s facilities are astounding: a 6,000-square-foot soundstage; state-of-the-art AVID editing lab; and the new industry standard, RED cameras. “These cameras surpass the standard of film; they are better than film,” Frederickson says. “As for AVID, any student who learns this system can go immediately to work in TV or film.”

The cinema veteran is carefully optimistic about the future of film in Oklahoma. “My hope is that one of these talented young kids makes a movie that breaks out, a movie that is Oklahoma-made and Oklahoma-grown,” Frederickson says. “That will stimulate the local industry.”

“Oklahoma can’t compete with Hollywood,” he adds. “All the infrastructure is there. But there is a standard of living here, and people will move here if the work is here. In the meantime, we have to keep trying to attract outside productions. We can offer them good deals, great working conditions and a city where nothing is more than 15 minutes away.”

Frederickson also points to an intangible aspect of producing a movie – or doing anything else – in Oklahoma: the vaunted “Oklahoma standard.” He recalls recently shooting the film “Soul’s Midnight” with Armand Assante on location at the Brown mansion in Heritage Hills. “We blocked off all of Heritage Hills with our trucks and lights for a week. People in the neighborhood were bringing sandwiches and lemonade and coffee to us. The owners of the mansion told us the trailers looked uncomfortable, so they took the actresses upstairs into their own bedroom [to use] as a dressing room. They loved it! You go to Dallas, you can’t do that, not to mention L.A. We did a picture in Malibu, and it cost $35,000 to park our trucks for one week. Just to park the trucks! You don’t have that kind of cost in Oklahoma. It’s a convenient and easy place to work, and if we can keep getting the word out, we’ll see the industry really take off.”

The Oklahoma Film Institute’s 2012 summer series of “Cinema Clinics” is a five-part series of intensive, three-day classes designed to give students in-depth and hands-on insights into the process of filmmaking. All courses run 9am-6pm in the Visual and Performing Arts Building at OCCC.

For registration or more details, call 682.7847 or email gfrederickson@occc.edu.