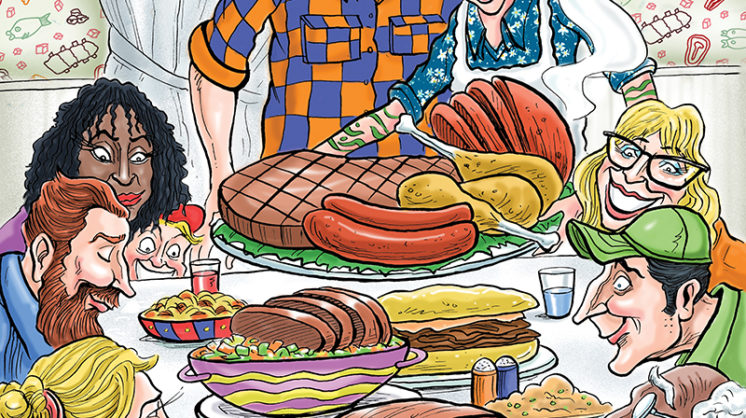 Growing up in Oklahoma, Sundays usually meant coming home from church to the aroma of pot roast filling the house. The cut had been allowed to thaw overnight, and then placed in the slow cooker or “electric skillet” before we left for Sunday school. The smell of pot roast still sends an involuntary pleasure response through my brain, but my mother’s overcooked carrots and potatoes are seldom replicated in restaurants.

Still, Southern comfort food is central to the culinary history of Oklahoma. For other Okies it was fried chicken on Sundays or fish fries on Saturdays. Pinto beans and ham hocks or bacon were staples in public schools and family tables, cost being a key factor in that choice. In most cases, feeding families meant high carb, high protein, high fat diets, and my mother fed three teenage boys with a loaf of white bread and a boat of gravy more than once after football practice.

The problem with comfort food is that the associations are usually based on family contexts, so replicating it in restaurants is difficult. While my favorite leaf-eater, Christine Eddington, will handle vegetarian options in this issue (page 54) – we omnivores eat vegetarian, too; we simply call them sides – my task is to offer the reader choices around the 405 for places that do “meat and potatoes” well. That phrase should not be construed too narrowly, though, because comfort food takes all kinds of shapes, including dessert and the occasional side dish (mac ‘n’ cheese, anyone?).

Hal Smith Restaurant Group has established its reputation as a collection of concepts that produce comfort food with remarkable consistency and serve them with outstanding efficiency. When Kevin Durant left town, Smith himself had to fire up his contingency plan for the Bricktown location previously known as Kd’s.

“We knew there was a possibility that KD would leave,” Smith says, “so we came up with the idea of a destination restaurant where people could enjoy Oklahoma and Oklahoma food.”

Like many of us, Smith grew up eating Okie food – fried chicken on Sundays for his family, meat loaf, French dips and even shrimp and grits. When he looked at the Kd’s menu, he realized that it could be adapted with only minor tweaks because it already had several items that, while not necessarily Oklahoma-specific, were certainly part of our culinary traditions.

So it is that Legacy Grill now has fried chicken and waffles, a newly designed meat loaf, ridiculously delicious pot roast, mashed potatoes and a new shrimp pasta dish. The food, like all HSRG food, is produced with attention to detail and a commitment to quality and affordability. The fried chicken is brined for 48 hours, so it is full of flavor, and the juices are locked in by the deep fryer. While I’d never say it was better than my Okie grandmother’s, it is better than some people’s grandmothers could produce. 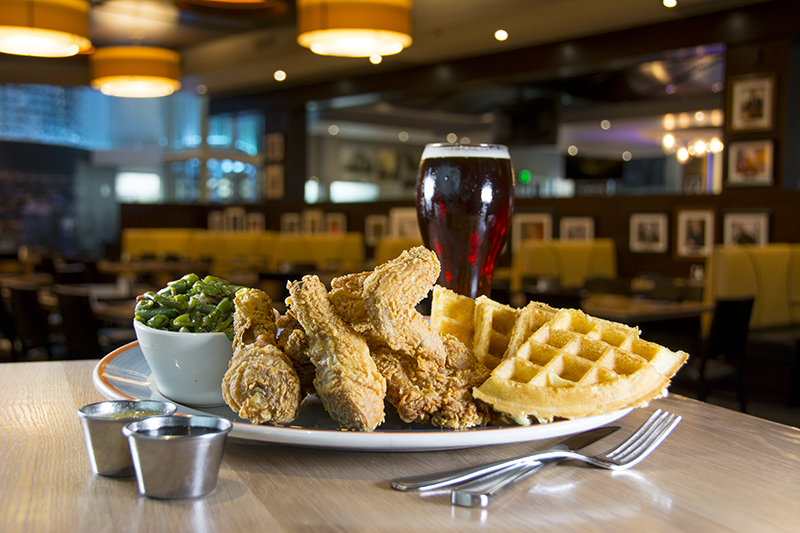 Since this is about meat and potatoes, Redrock Canyon Grill is worth mentioning, since they have some of the best meat loaf available anywhere. If your mom was the type who finished the meat loaf with ketchup, you have our unqualified sympathy. That’s not how meat loaf should be treated. HSRG Executive Chef Brad Johnson is a big believer in beef, but he’s not opposed to blending the meats either. The Legacy Grill meat loaf is 5 percent sausage, but at Redrock it’s all beef – the trimmings from beef tenderloin and ribeye.

It’s almost impossible to talk about the best comfort food in the 405 without mentioning the chicken fried steak at Cheever’s Café. At this point, the dish is justifiably iconic. Two hand-breaded cutlets – enough to cover a dinner plate – are served with mashed potatoes and jalapeño-cream gravy. There is another side in there, but I’ll need a vegetarian to explain to me which kind of green garnish it is. The gravy alone is worth the dish, and at this point, unless you are on a plant-based diet or have other restrictions, you should have to try this dish to call yourself an Oklahoman.

The sides at Cheever’s are fantastic, even the ones featuring vegetables, and this is probably a good place to concede a point. The vegetarians among us are right about a few things, but the vegetarian vs. omnivore discussion is won or lost on taste, and omnivores win that one. We could eat less meat; that would be better for the planet and better for our health. That’s sort of indisputable at this point, but beef and pork and lamb, etc., are delicious, so finding a way to eat them ethically and healthily is the goal, not abandoning them entirely. 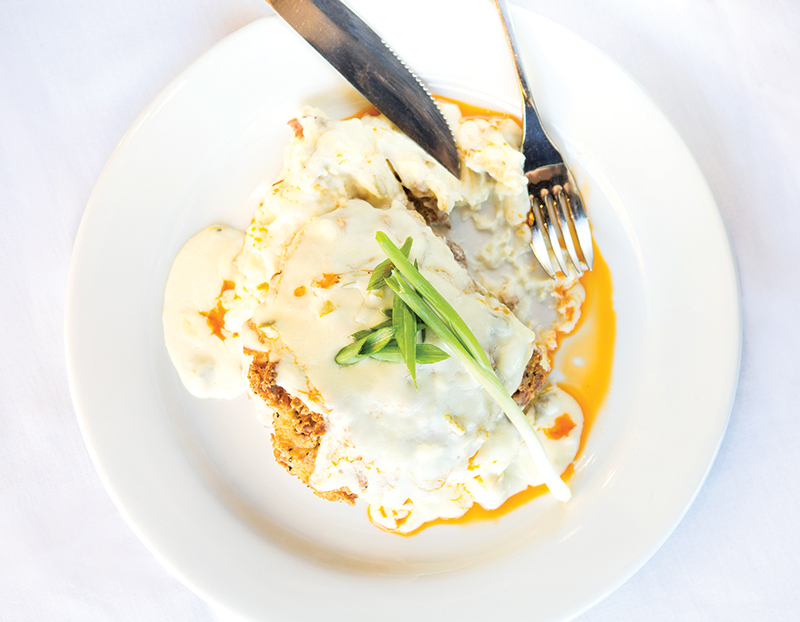 Mac ‘n’ cheese is one of the easiest, most delicious ways to add calories, flavor, protein and fat to a diet. How many of us haven’t had Kraft Macaroni & Cheese? For some of us, it’s still a guilty pleasure. Remember grabbing a microwaveable bowl as a kid? Remember grabbing a quick sandwich? Maybe even the pot roast from the day before with a little mayo and tomato. Why not combine them into one amazing meal? That was sort of the solution they came up with at The Mule.

The Mule decided that if mac ‘n’ cheese and sandwiches are great separately, they’re even better together. (Note: This does not work with every possible combination of two things you love.) The most obvious choice is the Macaroni Pony since it combines mac ‘n’ cheese with pulled pork and jalapeno cornbread – yet another comforting staple we haven’t yet mentioned.

From there, an obvious realization occurs: Macaroni is really pasta! Therefore, pasta is an Okie comfort food! Of course it is. Most of us grew up with spaghetti once a week. Since it first opened, Café 7 has been serving fast, affordable, delicious pasta dishes to a vast number of Oklahomans since it first opened. Managing partner J Mays said the pasta dishes far outsell their sandwiches, salads and pizzas.

While the downtown location only does breakfast and lunch, the North May store is open for lunch and dinner, and dinner includes a longtime favorite Pasta Maggio: rigatoni, chicken, mushrooms and artichokes in creamy pesto sauce. Café 7 features other childhood favorites, too, like fettuccine alfredo and spaghetti with meatballs. The team focuses on processes, so they get food out hot and fast – which is to say, don’t let a long line deter you. 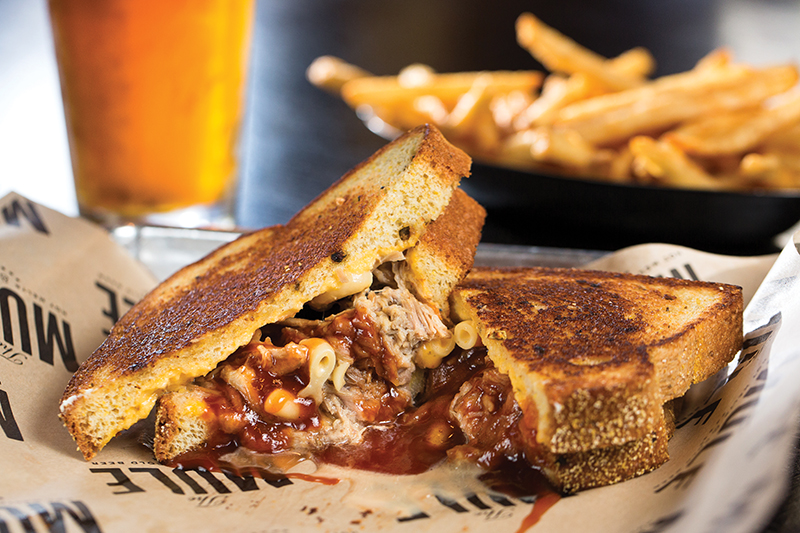 Here we arrive at steak. There may not be a more signature Oklahoma choice. Did your dad fire up the grill on weekends? Hopefully, he knew how to cook it to temp, and hopefully you didn’t grow up in one of those families where they treat steak unethically … by which I mean cooking it past medium. The state produces beef, and largely because of that, we get some of the best beef in the world right here in Oklahoma City.

Beef prices are as high as they have been in recent memory, so prime steaks are going to cost you dearly. Sorting through the selection of prime steakhouses in the 405 can be an impossible task. How do you prefer one prime filet to another? Sides can help sort through that, and Ranch Steakhouse, Mahogany and Red PrimeSteak all have good sides.

Ultimately, it comes down to the meat, though, and that becomes a personal preference. I go for ribeye – marbling matters – but friends prefer filet or strip. It’s impossible to go wrong at our city’s best prime steakhouses. Just expect to lay out some serious cash for now.

Vegetarian meals will always provide a healthy option to eating meat every day, and unlike some of my omnivorous friends, I really do enjoy a Portobello sandwich. I’ve even eaten the occasional veggie burger; I just wish they’d call it a veggie-mash sandwich instead of a burger, since that’s what it is. Omnivores do themselves a favor by opting for a flexatarian diet, but we are unlikely to convert, because the “carcasses or corpses,” as some vegetarians and vegans are prone to call them, are delicious. And, yes, I know how they ended up on my plate. 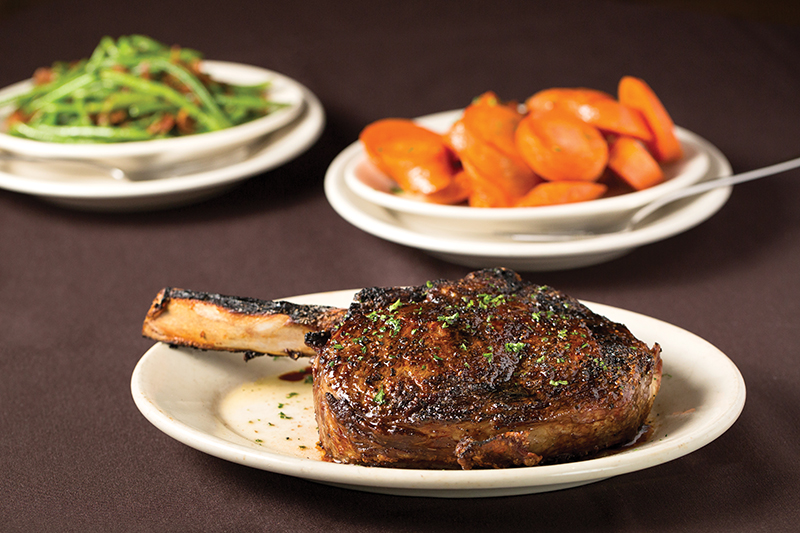 ► A Legacy of Teamwork

When the transition from Kd’s to Legacy Grill was underway, Hal Smith and his team made the decision to retain and pay the employees during the 45-day preparation time. In order to keep the team focused and foster a sense of community, managing partner Nathan Couch got them involved in charitable work in Oklahoma City.

“At first we were suggesting projects, but before it was over with, the employees were coming to us with ideas of how they could help the community,” Couch says. “It was amazing to see.”

Hank Kraft, the COO of HSRG, said they knew the employees they had were special, but their willingness to dive into the community to help where they could confirmed it for the company. “Individual stores will get involved in projects, but this team was choosing projects, working together and staying together through a transition period.”

The projects included work at both Ronald McDonald Houses in Oklahoma City, centers for the charity that provides temporary lodging to the families of sick or injured children who are receiving medical treatment in facilities away from their hometown. Legacy Grill employees helped families staying in the houses by feeding them extremely well on a special guest chef day.

In addition to the Ronald McDonald House events, employees volunteered at a local animal shelter and worked on a Habitat for Humanity home together.

“HSRG took an unusual and expensive step in keeping the team together,” Couch says, “and they responded by working together, helping the community and getting closer together as a team. It was inspiring to be a part of it.” 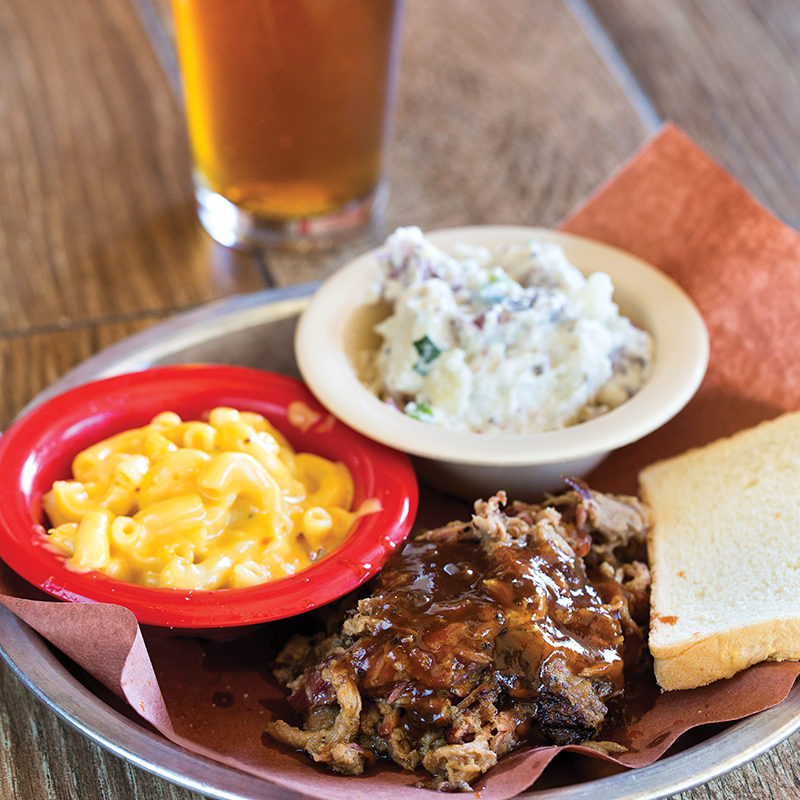 In one of the greatest “Simpsons” sequences of all time (which is a high bar), Homer is trying to understand why Lisa is choosing to become a vegetarian. He questions her about eating meat ever again and then lists three of his favorites.

“Dad, those all come from the same animal!”

Omnivores do understand that Homer is only accidentally exaggerating here. Pigs are wonderful, magical animals, and the list of incredibly delicious cuts and applications is far longer than the one in the episode. While Chef Chris McKenna at Packard’s New American Kitchen is as good with pork cuts as anyone we know, the Piggy Burger stands out as one of the most comforting of comfort foods in the metro. The mix is ground, blackened pork shoulder, a little bit of bacon and sliced ham. The French fries at Packard’s are more than an afterthought, too, but you’ll need to ask for ketchup, since they usually come with tomato jam.

For a more traditional use of pork, try the pulled pork at Back Door Barbecue. Really, though, the meats and sauces – hot or mustard for the pork – are delicious, but the sides at Back Door really stand out. The potato salad is inexplicably delicious; it’s potato salad! The bacon in the mix might be the secret, but whatever the case, both the beans and potato salad are must-haves.