Comfort Is Calling: Biscuits and Gravy in OKC - 405 Magazine 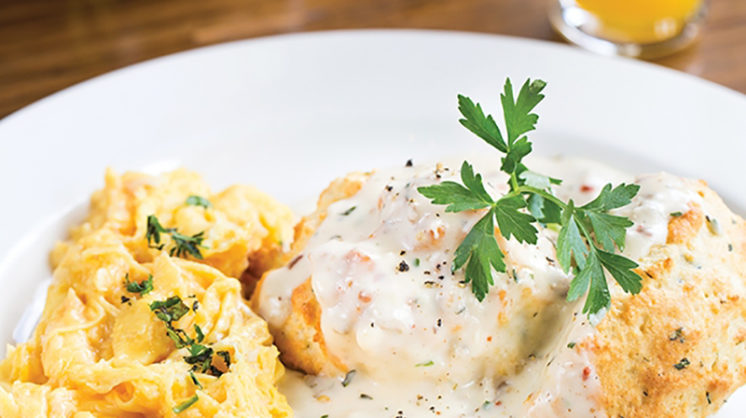 If Given The Option, Every Southerner Would Likely Claim That Some Post-Depression Grandmother In Her State First Paired Biscuits With Gravy.

In a recent discussion with a couple of chefs about what constitutes Oklahoma cuisine, biscuits and gravy were mentioned as a quintessentially Oklahoma dish. The history is a little sketchy, and quite frankly, no one cares. Biscuits and gravy might be the perfect breakfast or brunch food, and it simply does not matter who the genius was that put them together.

From traditional buttermilk biscuits with sausage gravy to more creative, complex recipes involving béchamel and cheese biscuits, Oklahoma City is home to a dizzying assortment of biscuit and gravy dishes. Some of our local restaurants will even serve them for lunch, and why not?

When Vuong Nguyen opened Bonjour, he knew he wanted to make everything in-house, and he wanted an East Coast-style deli/diner of the sort he frequented as a teenager. Classically trained by Alain Buthion of La Baguette and Kurt Fleischfresser, Nguyen is one of the most talented chefs in the metro, but he opted out of fine dining and chose to focus on breakfast and lunch. By popular demand, he eventually opened weekends for brunch.

Bonjour’s drop biscuits are free form and baked with Gruyere cheese in the mix. They aren’t pretty, but they are delicious. Chef Beth Ann McFarland-Lyon, whose own dish appears below, recommends Nguyen’s craft as an excellent example of how to elevate a simple, rustic dish. “Vuong’s biscuits seem simple when you look at them, but there is a ton of impressive technique in what he does,” McFarland-Lyon said. Vuong finishes the biscuits off with his house-made deli gravy, which contains bacon, pastrami and corned beef, all cured in-house.

When McFarland-Lyon rolled out the spring menu at The Mule, she chose to include Gouda biscuits and gravy. The Mule is well known for its focus on comfort food, and the biscuits and gravy certainly qualify. The buttermilk biscuits are made with smoked Gouda, and the gravy is a straight béchamel with lots of pepper. For the hearty appetite, she is happy to finish the dish with short ribs and eggs over easy. Good luck finishing it.

Chef Chris McKenna at Packard’s New American Kitchen is actually responsible – in the good way – for two gravy recipes in Midtown. Before he left Stella Modern Italian, he added his grandmother’s sausage gravy recipe to the brunch menu. Chef Melissa Aust tweaked the gravy recipe, but added her own semolina biscuits to the dish. “We use our house-made Italian sausage in the gravy, and I add an herb blend that includes fresh fennel and fennel fronds,” Aust said.

After he moved to Packards, McKenna moved the chorizo gravy off the menu and created his own sausage gravy recipe. As an homage to his grandmother, he continues to make his own breakfast sausage in-house and leaves it in the pan as he makes the roux. That sausage, made from pork butt, is the heart of the gravy. “I love blackening seasoning, and I add it to a lot of things,” McKenna said. “It’s in the sausage, with some chili flakes for heat and maple syrup for sweetness.”

The Diner in Norman is something of a tradition for locals and OU students. The Diner was featured in Ty Pennington and Amanda Freitag’s “American Diner Revival,” which began in May this year on Food Network. Stephanie Morrical, a co-owner of Café 7, recommends the biscuits and gravy at The Diner. “There is just something about the house-made biscuits and the gravy that’s cooked on that grill top that’s about a hundred years old,” Morrical said.

Rocky Mountain Grill in Edmond also offers up a pretty traditional take on biscuits and gravy, but the place has earned a reputation for delivering delicious food at an excellent price. In addition to the biscuits and gravy, Rocky Mountain Grill is one of the few places left where diners can still enjoy chipped beef on toast. For those of us who grew up in or around the military, the concoction was a staple for breakfast, and occasionally when families enjoyed “breakfast for dinner.” Not only was it inexpensive and filling, creamed, chipped beef really is delicious; after all, it’s really beef gravy on flat biscuits.

Is any one recipe in the metro the best? That’s up to you to discover – happy hunting.