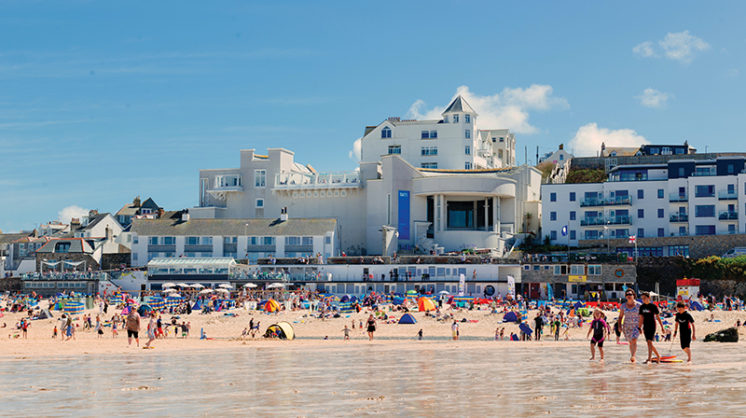 The coast of Cornwall is 258 to 1,000 miles long – depending on how many nooks, crannies, inlets and outlets you measure. Only 45 miles at its widest point, no place is more than 25 miles from the coast. Any way you look at it, the scenery throughout England’s farthest southwest county is long on beauty.

On the train from London to Penzance – a five-hour trip to the end of the main line – travelers get few opportunities to see the water. Really exploring the Cornish coast requires a car and nerves of steel … or a driver familiar with a maze of narrow roads. Luckily, we had that, since our daughter lived in Cornwall for a decade.

Highlights along the southern coast include charming little fishing villages including Looe and Fowey, stately mansions and elegant gardens. Falmouth is home to the National Maritime Museum, a good place to learn about the important relationship between Cornwall and the sea. But to me, the crown jewel of the southern coast is at Marazion: Just off the coast stands St. Michael’s Mount, the English cousin of France’s Mont Saint-Michel. Beginning with an abbey built by French monks in the 12th century, the original structure morphed into a fort and later a castle, which has been owned since the 1600s by the St. Aubyn family.

Cut off from the mainland at high tide, visitors arrive at the island by boat. At low tide, a causeway provides a route for both passengers and vehicles. Tours of the castle take guests through formal rooms and the ancient chapel, still used for services. Gardens tumble down the steep granite hillside. Far below the battlements, the channel waters can shine serenely or crash dramatically against the stony outcroppings.

Penzance, a quick five miles west of Marazion, is a tourist town abounding with guesthouses and other accommodations, and is a convenient hub for exploration of western Cornwall. The Summer House B & B is one of the most attractive choices, and an easy walk to the historic part of town and the Promenade that goes along the shore.

“Quaint” and “charming” are words that get worn out in Cornwall, but must be used for Mousehole (pronounced Mouzel), a tiny village full of art galleries, souvenir shops and photo opportunities. Look for local artist Nigel Hallard’s gallery – it’s one of my favorites. 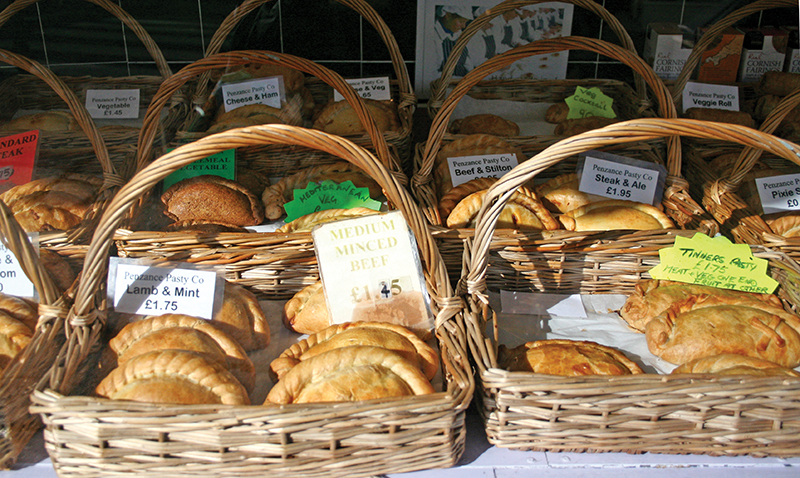 Try a Newlyn crab sandwich or a pasty at Pam’s Pantry. A word about pasties: these Cornish half-moon shaped pies with their thick, crimped crusts were originally made for men working down the tin mines. The heavy crusts were for holding the pie – not for eating – and inside the filling was usually meat and veg. Sometimes the pie was savory at one end and fruity at the other.

Porthcurno has a lovely beach and an interesting museum where you’ll learn about telegraphy and undersea cable history. Explore the tunnels that protected this vital communication center during World War II. Porthcurno later drew students from all over the world to study modern communication methods.

The big attraction, however, is the Minack Theatre, which hangs from the cliffs above the English Channel. One of the most famous outdoor theatres, the Minack has evolved from one woman’s dream of Shakespeare performed with lighting from car headlights in the ’30s to a modern facility visited by more than 200,000 tourists and/or theatre-goers every year. From here, it’s not far to Land’s End, geographically interesting but way too touristy for my taste. You’ll get views just as spectacular almost anywhere along the coast.

Heading north up the Atlantic Coast, you’ll come to an area that is part of the UNESCO Cornwall and West Devon Mining World Heritage Site. “Poldark” fans, this is a must-see stop.

Mining in this area has a history of thousands of years. The landscape is littered with chimneys and remains of engine houses, and the whole area is riddled with shafts, some extending over a mile under the ocean. In 1990, the Geevor Tin Mine was one of the last to close. Now you can tour the main complex, explore an old mine shaft and learn lots in the excellent museum. Follow a morning visit with lunch at Heather’s Coffee Shop in Pendeen – great soups, breads and sandwiches.

Get great views at the century-old Pendeen Lighthouse and stop nearby for a close-up of engine house ruins. As you drive along the coast, look for the irregularly patterned fields outlined by Cornish hedges (rock walls often totally overgrown by grasses and bushes). The configurations of the fields date back to prehistoric times. 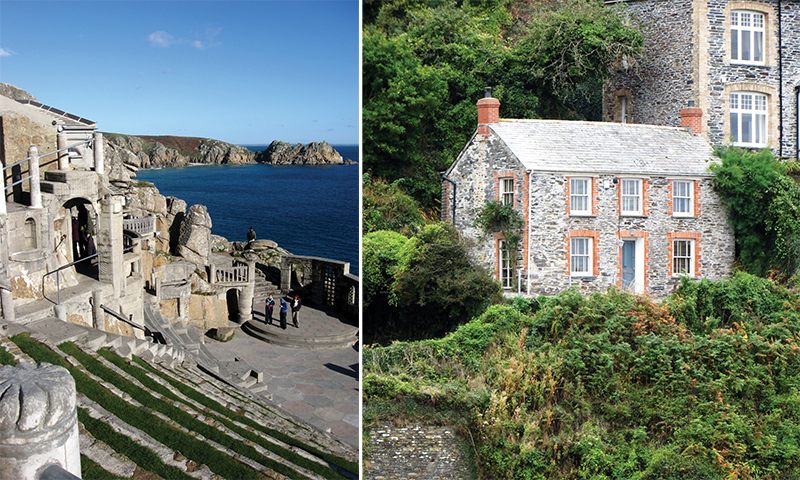 • The Minack Theatre was born in the ’30s when local resident Rowena Cade decided that the cliff below her home would be a great place for an outdoor theatre.

• Fern Cottage in Port Isaac serves as the doctor’s office/residence in the popular series “Doc Martin.”

St. Ives, farther east up the coast, is one of Cornwall’s most popular beach towns. Porthmeor Beach is a favorite of swimmers and surfers. The town itself is chock-a-block with galleries and shops and is home to a branch of the Tate Gallery (open in summer) and the Barbara Hepworth Museum and Sculpture Garden.

About an hour and a half up the coast from St. Ives, Port Isaac is a Cornish TV star. The town plays the village of Portwenn in the popular UK series “Doc Martin.” The streets will be so familiar to any fan of the program that you’ll expect to see the doctor, Louisa or Bert coming around the next corner. There are several nice galleries here, including the excellent Port Isaac Pottery.

At the top of the village we had lunch at Fresh From The Sea – and it really was. One of the owners, Calum Greenhalgh, arrived with the day’s catch of crabs and lobsters as we were eating a light lunch. This place got all the dots I could give it on TripAdvisor.

That’s a quick spin around some of my favorite Cornish spots. Obviously, you wouldn’t do this trip all in one fell swoop. Each stop is really a day trip of its own. Plan plenty of time in this wonderful county – sightsee, relax and enjoy an evening at a local pub. For more information, check out visitcornwall.com.