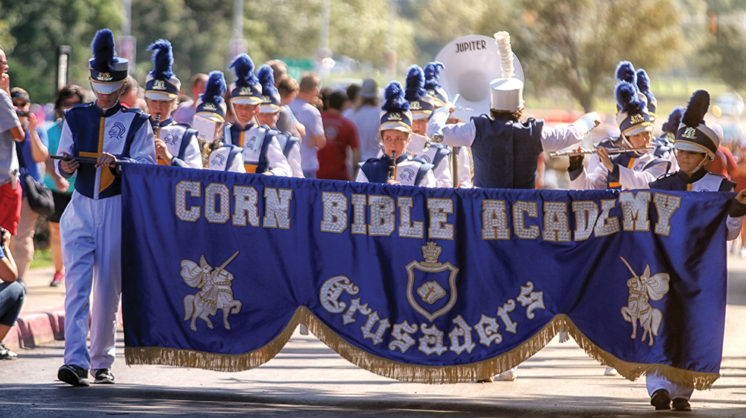 During the 1892 Cheyenne-Arapaho Land Run, 18 homesteaders established what would become Oklahoma’s largest Mennonite town, named after the German word for grain: Korn.

With their hopes and belongings, they brought seeds for a hardy strain of winter wheat called Turkey Red, and the seed and the colony flourished in the Washita County soil.

More than 90 families, many of them arriving from Kansas, settled in the area by winter of the following year. The Korn post office was established two years later, and eight Mennonite churches were established within 10 miles of the town center. The school – originally known as the Washita Gemeinde Schule – was established in 1902.

The name of the town was anglicized to Corn in 1918 to avoid anti-German suspicions during World War I, and the school became known as the Corn Bible Academy.

CLAIM 1: The Corn Bible Academy is the oldest Christian school west of the Mississippi River.

FACT CHECK: False. The Corn Bible Academy was established in 1902, and although its founding predates statehood, it is not even the oldest Christian school in Oklahoma. That honor goes to Holy Trinity Catholic School of Okarche, in continuous operation since it was established in Oklahoma Territory in 1897.

Several other schools operating west of the Mississippi River were founded in the 19th century. Among them:

CLAIM 2: The academy is the fifth-oldest Christian high school in the United States.

FACT CHECK: This is also incorrect, by more than a century. The oldest religiously based school in the United States was established nearly 400 years ago on the island of Manhattan by leaders of the Dutch Reformed Church and  the Dutch West India Company.

The Collegiate School suspended operations only once since 1628, when the British occupied New York City during the American Revolution.

Collegiate settled in its current home  in 1892, next to New York’s West End Collegiate Church. Although now non-denominational, the K-12 school is ruled by a 25-member board of trustees including representatives of the Reformed Protestant Dutch Church of the City of New York. Yearly tuition is $47,500.

Established in 1727, the Ursuline Academy of New Orleans is the oldest continuously operating school for girls and the oldest Catholic school in the United States.

In Pennsylvania, the Moravian Academy of Bethlehem sprung from a school for girls founded in 1742 by the Moravian Church, a Protestant denomination established in Bohemia whose adherents would go on to do missionary work in Indian Territory. The Moravians also founded Linden Hall in Lititz, Penn., in 1746. Both schools remain in operation today.

Other institutions recognized on a recent The Best Schools ranking of the 30 Top Christian Boarding Schools in America include the Baptist-funded King’s Academy of Seymour, Tenn., founded in 1881; the Methodist Pennington School of New Jersey, founded in 1838; St. Timothy’s Episcopal Diocesan School for Girls in Maryland, chartered in 1832; and the Scattergood Friends School of West Branch, Iowa, founded by Quakers in 1890.

ROOM FOR GROWTH: Today, Corn’s population hovers around 500. The school is home to around 90 students, enrolled in seventh through 12th grade. They travel the 13 miles up OK-54 to Weatherford and onto I-40 to traverse the state, representing Corn in the annual Oklahoma State Fair Marching Band Competition and singing the national anthem before a Thunder home game.

The school has big plans, and last year broke ground for a new site: a $10 million project that includes a new 43,000-square foot main building on a 40-acre campus just south of Clinton.

At its annual fundraiser – the 53rd annual German Feast & Auction, held in February – friends and family raised $109,807 with a lunch, bake sale, silent and live auctions and supper. The sale of the traditional schnetka pastries alone grossed $7,245, at $15 a dozen.

After moving into its new home, the Corn Bible Academy – the second-oldest Christian school in Oklahoma – hopes to nearly double its enrollment, to 200 students.