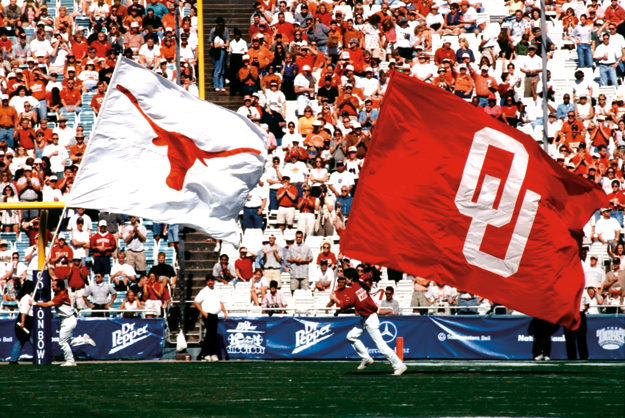 It’s an annual rite of fall that has reached near-Biblical proportions. When the Sooners and the Longhorns take the field at the Cotton Bowl in Dallas on October 13, it will mark the 107th matchup of what has often been described as the greatest football rivalry of all time.

If you live in Oklahoma, it’s OU-Texas. South of the Red River, it’s Texas-OU. Whatever you call it, there is much to celebrate about it. The man we love to love, Coach Bob Stoops, sums it up best: “It’s just a great environment. It gets your juices going, gets the hair up on the back of your neck. It’s as good as it gets.”

The scores, the key plays and the exceptional players throughout the years are rote to the ardent fan. But the game is more than a game; it’s the sum of its parts. And getting there is half the fun.

Many of us superstitious types feel personally responsible for each Sooner (or, as the case may be, Cowboy) victory. As fevered sports loyalists will attest, Game Day Magic – however inexplicable to the rational – is nothing to be trifled with.

Oklahoma City mayor Mick Cornett, who freely admits to being superstitious, considers himself an ardent Green Bay Packers fan. A couple of years ago, Cornett told Slice, “When things aren’t looking good for them [the Packers], I get out an autographed Reggie White Campbell’s Soup can and put it on top of the TV.”

The soup can’s effectiveness, while patchy, may very well have nudged the Packers to the “W” side of the column on several occasions, without them ever knowing the man (and the can) responsible for their triumph.
Chalk it up to lucky underwear, ritualistic game day routines, standing in one “lucky” spot during a televised game or just avoiding the known jinx among one’s social circle: whatever it takes to ensure victory is exactly what we’re willing to do.

Major General (Ret.) Rita Aragon, Oklahoma Secretary of Military and Veterans Affairs: If my team is playing (whoever may be unlucky enough to have that designation) I refuse to watch really important games (playoffs, championships, conference finals). I turn it off or walk away, certain they cannot win if I’m watching. So I drive everyone crazy asking if it’s over yet, did they win, what’s happening… but I never, never watch the ending to a tight match; I’ll cause them to lose! Sad, I know. Maybe even disturbed.

Sara Gae Waters, Slice Magazine stylist: I wore the same red sweater to the 2004 Sugar Bowl (OU vs. LSU) and then while watching the 2006 Orange Bowl against USC. We lost both; I put the sweater on the shelf. I put it on again for another game, mistakenly thinking that, surely, the sweater had nothing to do with those previous, awful losses. After a dismal first half, my friends insisted that I change. I did, and yes, we won the game. The red sweater resides in Boston now. (Lauren’s note: Too bad it went to Boston and not Austin.)

Laniece Watkins, Oklahoma City: I call my dad and ask him who will win. He is ALWAYS right. I even have friends who now call him or Facebook him to get his prediction. It’s really spooky. He always knows.

Shawn Clark, Girls’ Basketball Coach at Bishop McGuinness Catholic High School: I have a few superstitions relating to the games I coach. One, I do not like to watch my team warm-up. Two, I always stand at the end of our bench during warm-ups. Lastly, I have to be seated during the tip to start the game. Not too weird, but I always do these things.

Shirley Webster, Assistant Athletic Director at Heritage Hall School: Coaches are the worst when it comes to game day superstitions! 1. Left sock on before right, and then left shoe on before right one. 2. To change your luck, walk around your chair to the left. 3. On days where I have a “big” game, I always wear blue underwear! (Charger blue, of course.) When I coached varsity volleyball, I was known to go shopping for new “blues” the night before the state finals!

Most Superstitious by a Mile

Jim Allen, Edmond: Prior to the season, I’ll get things going by watching old games on video, usually in chronological order. On game day, we follow a strict ritual. We begin with the playing of the OU chant, followed by “Boomer Sooner.” That is followed by a CD of random football fight songs as we get ready to go. I generally start the season with certain attire. If OU wins, I’ll stick with that every game until they lose. My wife usually has “lucky” underwear. We park in the same place each game, and we try to be in the stadium by the time the teams are warming up. As for OU- TX, I did dream the score one year – 1978. I always try to have a positive dream prior to the big games. I don’t like watching TV games unless everyone there is 100 percent for OU. Bad vibes affect the team, you know. Finally, we know almost everyone who sits around us at home games, so if there are a bunch of odd characters in those seats, it makes me nervous – especially if I perceive they are of questionable loyalties. That REALLY bugs me.

Strangers in a Strange Land

Walking among us – yes, among our children and the elderly – are The Others: Longhorn fans whose fierce loyalties stir up some powerful opposition, threatening to neutralize all that good mojo the rest of us have been sending out into the Sooner and Cowboy universe. And sometimes, it works.

Marc McCord, Oklahoma City (by way of Texas): I have to wear my Longhorns hat. Then I put “Texas, Fight!” and “The Eyes of Texas” on continual loop at peak volume all morning.

Steve Olafson, Reuters Reporter, Oklahoma City: On game days, not long after I wake up, I do some jumping jacks, run in place for about 15-20 seconds and then clap my hands and holler something like, “Let’s go!” Now, I’m surrounded by Sooners in my neighborhood, so my game day ritual is not foolproof.

Although Texas leads the series 59-42-5, there have been a few bright spots in this annual matchup.
1900 First meeting of the Oklahoma and Texas “Elevens” (Advantage: Texas)
1907 Oklahoma Territory becomes a state.
1932 First meeting at the Cotton Bowl in Dallas, a location some refer to as the Longhorns’ home field “annex.”
1937 Cotton Bowl becomes the official site of the annual rivalry.

1941 State Fair of Texas donates The Bronze Hat trophy to the Rivalry. The trophy, which goes home with the victor for a year, received a makeover during the 1970s, emerging as The Golden Hat.
1947 A Clockwork (Burnt) Orange: sketchy clockwork allows Texas to reset clock and score a winning touchdown in the final seconds of the game.
1948 Sooners begin bringing their own damn clocks and win the next three matchups against the Longhorns.
1953 OU’s 19-14 win over Texas begins a 47-game winning streak under (Saint) Bud Wilkinson, the longest in Division I history – a record that still stands.
1957 Soviet launch of Sputnik eclipsed by OU’s 21-7 domination of Texas.
1960s Let’s call this decade the “rebuilding years” for OU as most of the future ’70s greats grapple the turbulent social issues of their day – namely, puberty.
1972 Longhorns go home with the same number of points they had coming into the game. OU 27, Texas 0.
1975 OU’s 24-17 victory isn’t the only thing that has Texas fans seeing red: naughty OU fans paint Bevo red before the game. (Unsubstantiated rumor: Bevo is later witnessed pointing his horns down in the OU end zone as a subtle gesture of Sooner solidarity.)
1985 OU slips by Texas, 14-7, with sophomore Troy Aikman at QB.
1995 The last tie of the series, 24-24. In 1996, the game goes to OU in overtime, 30-27.
2000 “The Mauling at the Midway,” also called “The Texas Massacre” – OU 63, Texas 14.
2001 OU QB Nate Hybl is injured during the game. Jason White takes the wheel and later merges onto the Heisman Highway.
2003 The Texas Massacre sequel: OU 65, Texas 13.
2004 First shutout in 24 years, OU 12, Texas 0.
2005 “Red River Shootout” is renamed “Red River Rivalry” and jinxes OU for two years.

Never in my lifetime has there been a time when some part of I-35 wasn’t under construction. Maybe that’s the reason we readily accept the fact that narrowed lanes and detours are just part of the road to victory. Even if the road to Dallas were smooth sailing this October, we’d still probably think up our own detours along the way, as long as they involved a snack of some kind.

Smartly outfitted in our elastic-waistband pants, here’s where we’ll be making detours along the 200-mile-long buffet from Norman to Dallas:

(Special thanks to our friends with the Oklahoma and Texas Departments of Tourism for their contributions.)