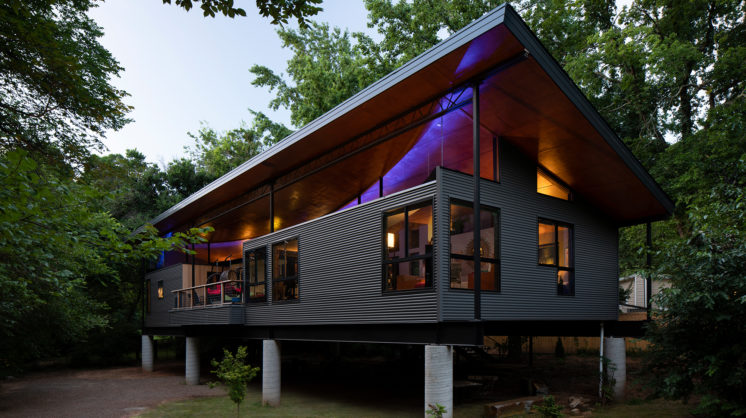 Shhh. About a mile east of the University of Oklahoma campus, the home of Alan and Jana Moring perches on the east bank of Bishop Creek, nestled under a hushed canopy of trees.

Alan Moring, a staff architect for OU who custom-designed the home, likes to refer to the residence as a tree house – or, when the trees leaf out, “a hideout.” Built on concrete piers that were sunk 21 feet into strong shale and rise 10 feet above ground, the home is situated toward the northern border of their rectangular three-quarters-of-an acre lot, behind a gate off Brooks Avenue.

The structure is a commanding sight, with its sharply angled roof, bearing on a steel truss, and glass windows that wrap its perimeter. At night, its eaves pop with color-changing LED lights.

Before you even cross the welcome mat, it’s easy to see why the local chapter of the American Institute of Architects awarded Moring’s creation a 2021 People’s Choice award.

There are two ways up: gently rising stone steps and a steel ramp to ease the delivery of heavy appliances and accommodate the aging hips of their three rescue dogs, a mastiff, pit bull and Australian shepherd, as well as their own joints.

The 1,624-square-foot home – which Alan simplifies as three squares of 26 feet per side – feels more than roomy with an open design and abundant natural light.

It’s far from overpowered by the couple, their dogs and a guest. In fact, the Morings once entertained 50 for a holiday party.

“These days, we’d much rather host people than go out,” said Alan Moring, 54, who’s been working from home since the COVID-19 pandemic and credits his wife for “trusting me to create something we’d want to live in forever.”

Vision for the property

The Morings bought the property seven years ago, and finished the house and moved in two years ago.

The last home on the site flooded 15 years ago, when Bishop Creek overflowed. But that didn’t blur Moring’s vision for the property.

“Designers,” he said, “love challenging sites, because they force you into creative solutions.

It was Jana, he said, who told her husband where to build the house. “Build it here,” she said, spreading her arms just so within the lot’s dished-out landscape that includes a 120-year-old ash tree and century-old elm.

Her husband subsequently went through some 60 iterations over the following five years, drawing plans by hand because he feels that they’re more thoughtful than computer-generated designs.

The only interior doors in the home are for the two water closets, and those rooms also are the only ones that have walls that extend to the ceiling.

“There’s no acoustic privacy, so it would be challenging to raise kids in the house,” Moring said. He and Jana have one son, who’s 26 and single and wants to live there some day.

Meanwhile, the couple did plan for possible future grandchildren, adding two adorable, curtained sleeping berths that flank their dining table. They’ve had the neighbor girls, Giorgia and Sophia, over for movie nights and sleepovers.

Moring chose a natural, economical and “close to maintenance-free” material palette: porcelain tile that extends throughout the house, balcony and porch, and plywood for the ceiling.

The residence boasts extra insulation in the walls and roofs, energy-efficient windows and a wood-burning stove that heats the whole house, so bills are low, he said.

Meanwhile, they spend a lot of time at the 18-foot kitchen counter with a marble top and custom plywood cabinetry with exposed edges and finger pulls. From the kitchen sink, they can look across the balcony and see the tree-lined creek.

“Mainly, I let him do his thing and served as a sounding board,” said Alan’s longtime friend and professional carpenter Richard Knapp. “On the balcony porch, I did encourage him to open up the cedar railing and forgo the expected posts.”

Knapp also worked with Jana Moring to put the walls of Alan’s closet on casters, so they could be pushed around and collapsed to make space for parties and other gatherings.

In their bedroom, the couple purposefully put the foot of their bed, rather than the headboard, against the exterior wall, so they – through floor-to-ceiling windows – can see the wild foxes play, witness the ruckuses of the barred owls and watch the blue herons fly over the creek.

They installed heated floors from their bed to the sink, to the toilet with its built-in bidet, and to a two-headed shower.

The nicest thing about living here?

“The mornings and evenings,” Alan Moring said. “We can experience the changes of the seasons and phases of the moon, with the sunlight and moonlight streaming through the high windows, and long shadows cast by the steel truss.”