Damon Lane: Behind the Forecast - 405 Magazine 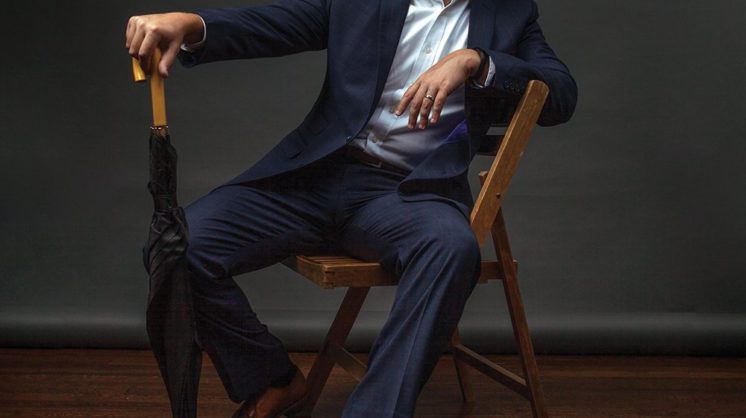 He’s a familiar face to most Oklahomans, and a trusted voice of reassurance during times of bad weather: Damon Lane is chief meteorologist at OKC’s KOCO-TV, and leads a team of professionals whose job it is to help keep Oklahomans safe. But behind the scenes, he’s just your average guy – a family man, sports enthusiast and also a cancer survivor.

How long have you been in Oklahoma? “I moved to Moore in 2009, but I grew up in northern Virginia, just outside of Washington, DC.”

What was Damon Lane like as a kid? “Well, high school was fun. I played baseball for three years and swam all four years. I kept myself busy with sports, so there wasn’t much room for me to do anything else.”

Back then, did you have an interest in meteorology? “I’m not sure how I became interested in meteorology. I think it’s always been in me. In the winter times, I would dream of the snowstorms that would cancel school. What kid didn’t?”

Are you married? “Yes, I met my wife Melissa at my first TV job in Abilene. I remember on my first day seeing a cute girl on TV, and I actually took a picture of her and sent it to my friends. I remember saying something like, ‘Hey, check out this cutie!’ We dated a little but never got serious, because we knew our TV careers would only keep us in Abilene for a short while – and then who knows where we’d end up? We stayed close friends, though. We would go to one another for relationship advice, while all our friends were telling us how great a couple we would make. She came to Oklahoma City shortly after Abilene, and then down to Dallas to continue her career. I invited her to be my plus-one at a friend’s wedding one weekend back in 2011. That weekend led to another, and before we both knew it, we were engaged. She moved here, and here we are.”

How about hobbies; what’s your favorite pastime? “In the winter, I love to ski. Like, seriously! Otherwise you’ll find me biking, swimming or playing in a bounce house with my 2-year-old daughter.”

If we were to somehow get your iPod, what kind of music would we find? “I listen to just about any kind of music, but for the past few years I have become a huge Mumford and Sons fan. I can listen to them play all day.”

A couple of years ago you were very public about an occurrence of skin cancer; how did you find out it was cancer? “I remember seeing a spot on my nose that would occasionally bleed every few days and then stop. It kind of resembled a pimple, but never went away. A few months later, I had it biopsied – and sure enough, it was cancer. Early detection was key. I had surgery and now it’s all gone. I still go in every six months just to get checked out. If you get it once, then you’re likely to get it again.”

And you continued working on air during your recovery? “I did. The public was very nice about it. I even had my doctor tell me he saw an uptick in people coming in because of my story. That made me feel really good. I’m glad I could convince a few more people to get checked.”

What sort of lifestyle changes did you make after that? “Well, I wear a shirt more often and use lots of sunblock. I’m no longer as tan as I used to be.”

Which is more nerve-wracking – dealing with iced-over roads or tornadoes bearing down on the Oklahoma landscape? “Great question! Oklahomans seem to know what to do when tornadoes come into town. They have their shelters and know when it’s time to go in. Ice, though … we are not as good in handling that. I may be driving slow, but there’s always someone around that is pushing the limits a bit. First, they go 15 mph, then 20, then 25. Once they start to feel good, they start to increase their speed, and then bam! So yeah, icy roads definitely concern me the most.”