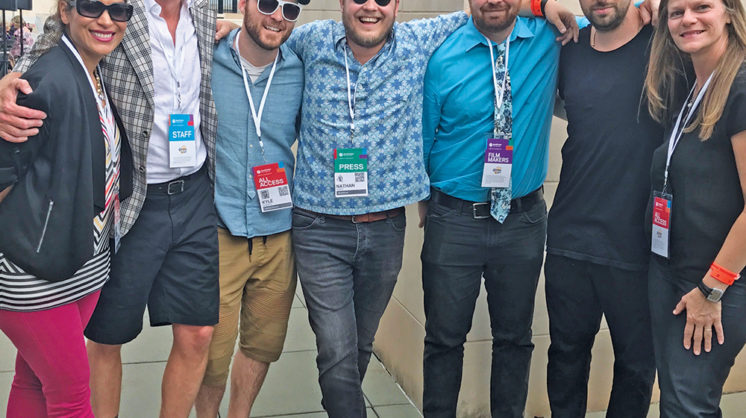 For the past 17 years, the deadCenter Film Festival has brought the greatest independent films and filmmakers from around the world to Oklahoma City, to screen their films and speak on panels alongside our state’s best films and filmmakers. Started as a one-night screening of local short films, it has grown into a year-round nonprofit that provides free film classes for 3,000 high school students each fall, offers quarterly continuing education seminars for working film professionals and hosts 30,000 people at its annual festival.

“When we started the festival in 2001, we really just wanted to get Oklahoma filmmakers together so we could share our work and see what everyone else was doing,” says co-founder Justan Floyd. “As filmmakers, we felt isolated and wanted to be part of something bigger, part of a community.”

That focus on community would come to define deadCenter for the next two decades. It quickly became Oklahoma’s largest film festival and the largest networking event for people working in film and entertainment. Actors, writers, directors, producers and musicians would come to deadCenter to meet each other and make connections for collaborating on future projects.

The Flaming Lips were the first celebrities to jump on the deadCenter bandwagon, screening several movies and concert films during its first decade. Now, deadCenter attracts a wide array of famous guests, from Hollywood stars such as Nick Offerman, Famke Janssen and Judd Nelson to Oklahoma natives including James Marsden, Megan Mullally, Wes Studi and Tim Blake Nelson.

“It’s always fun to have a few stars in the mix,” acknowledges Alyx Picard, deadCenter’s director of operations. “But the reason people come back year after year is the quality of the movies, and the ability to hang out with filmmakers all weekend at our awesome parties.”

To select the movies that screen each year, deadCenter works with 100 volunteers who watch and rate all of the films, and a six-person team of programmers who narrow the field down from the 1,200-plus applicants to the 100 films that play at the festival. And while no special consideration is given specifically to Oklahoma filmmakers, projects from Oklahoma make up 25 to 30 percent of the films shown.

“The movies being screened at the deadCenter Film Festival represent the future of the movie business.”

This year’s slate includes a diverse group of Oklahoma feature films: Jurassic Games, an action-packed adventure from director Ryan Belgardt featuring tons of CGI dinosaurs; Strike, Dear Mistress, and Cure His Heart, a David Lynch-style drama from local auteur Mickey Reece; and You People, a satirical comedy about modern stereotypes from first-time director Laron M. Chapman. These films will be joined by award-winning comedies and dramas from Sundance and SXSW, inspirational documentaries and short films, regional and world premieres and Virtual Reality 360 films.

The festival also will include a range of educational opportunities – Metro Technology Center will host a free deadCenter University program for 60 high school and technology center students, while the Metropolitan Library is screening free films for children 3-10 and ACM@UCO will host a full day of free panels about writing, directing, acting, editing and producing. Plus, 21c Museum Hotel is partnering with the festival to launch a techCenter conference focused on the latest technologies shaping the future of storytelling. Oklahoma companies such as Trifecta Communication, Boiling Point Media and Vanguard BG will join Google, WonderTek Labs and Distribber to provide hands-on demonstrations, presentations and panels about Virtual Reality, Augmented Reality, CGI, drones, streaming services and online distribution.

The 2018 deadCenter Film Festival takes place June 7-10 in downtown Oklahoma City. For a full schedule, film descriptions and trailers, dates and times of panels and presentations and information about how to purchase passes for the entire festival or individual tickets for each screening, visit deadcenterfilm.org. And … action.