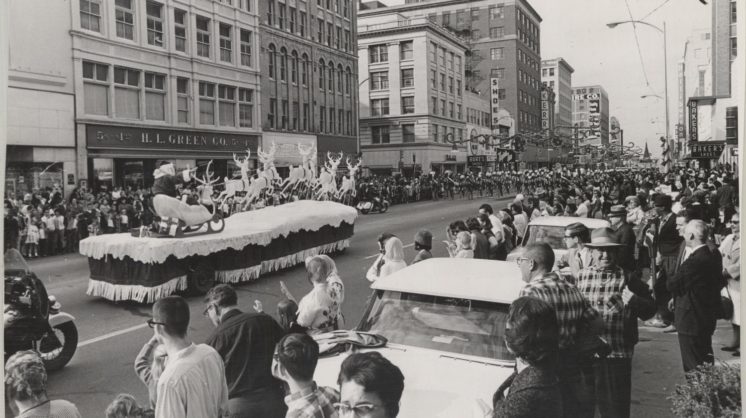 During downtown Oklahoma City’s heyday in the 1950s and ’60s, streets, trees, lampposts, storefronts and practically anything that didn’t move — and many things that did — were decorated with lights, wreaths, stars, garland, tinsel and silver bells in December.

It was a yearly sight that thousands looked forward to and enjoyed. Downtown Oklahoma City was the heart and soul of the city, and at no time was that more prominently on display than during the holiday season. People young and old crowded the streets to watch the annual parade. Shopping at downtown stores such as John A. Brown’s was an event any time of the year, but even more so during the holidays, as changing window scenes caused passersby to stop and smile.

Lee Allan Smith, a longtime Oklahoma City civic leader, shared his downtown holiday memories with 405 Magazine in 2018. “When I was a little boy at Christmas, my mother would take me downtown to John A. Brown’s,” Smith said. “That was the only place you could see Santa Claus — and Brown’s was great. Their toy section was on the same floor as Santa. My favorite gift he ever gave me was a toy train; I kept that in my mind forever.”

He also remembered the Oklahoma City Police Department patrolling on horses for easier movement through traffic. At Christmas, the department’s barbershop quartet often entertained, Smith said. “They would perform Christmas carols, and downtown shoppers always enjoyed that. It was bustling down there all the time.”

Enthusiasm for downtown’s holiday experience started to wane as urban renewal changed the look and feel of the landscape in the 1970s. Buildings were demolished. Lights dimmed. Many businesses and retailers closed operations for good or bolted for malls or shopping centers in more well-traveled areas of the city. But downtown was missing more. It had lost its vibrancy and heartbeat. Even the Christmas parade had off years, though today it has a new home as a boat parade on the Oklahoma River.

As downtown literally tumbled, several suburban and nearby neighborhoods stepped up to become favorite holiday must-sees with lights and displays that stretched from lawns to rooftops block after block. Then in the 1990s, nearby cities and towns enticed visitors from across the state with massive and elaborate drive-thru light displays.

But downtown Oklahoma City was just moments away from revitalization, which brought new skyscrapers, restaurants, apartments, condos and both big and small businesses. It also renewed interest in celebrating the holiday season where so many had decades earlier. Anticipating what could be, Downtown in December kicked off in 2002 with a few events and attractions. That number has grown to more than 30, with some starting as early as mid-November.

Downtown Oklahoma City is once again a destination during the December holiday season, though now celebrations stretch for weeks instead of just one day for one parade. People from near and far head there to ice skate, admire lights along the Bricktown Canal and Automobile Alley, shop pop-ups, enjoy seasonal music, ballet and theater performances, bundle up for river and canal cruises, join the Santa Run, try their luck at curling or ice climbing and get in the holiday mood at the Oklahoma City Tree Lighting Festival with family-friendly activities and photos with Santa.

One of the most popular events happens on the banks of the Oklahoma River: The Oklahoma City Holiday River Parade successfully launched in 2004 and some years draws up to 30,000 people to see the decorated boats, skiing elves and a fireworks and laser light show.

At this most wonderful time of year, Downtown’s spirit and lights are shining bright again.