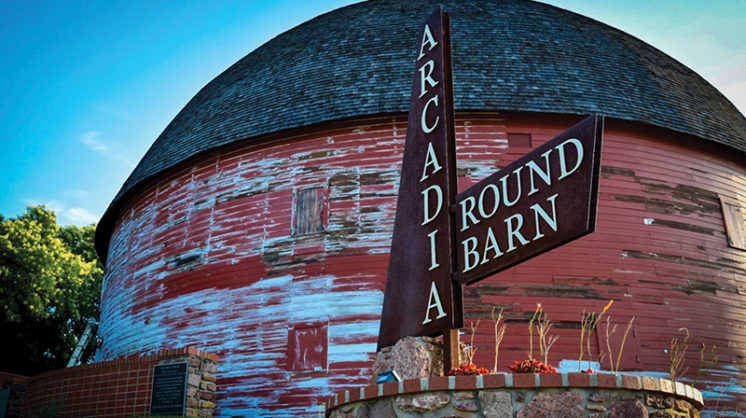 To Oklahomans, the name Arcadia conjures up images of a smallish lake north of OKC, covered in ski boats, jet skis and sunset silhouettes fishing from rickety piers. In addition, the historic Round Barn, located just east of the lake on historic Route 66. When it comes to food in the area, only one image leaps to mind: that ribbon-like spire of a soda bottle on the edge of a hayfield and the soda pop, countertop ephemera shop known as Pops.

All situated along 66, these iconic images have defined Arcadia and the surrounding area, some (the Round Barn) for more than a century. But despite its population of 256, when it comes to Arcadia, its lake and the region around, the area has much more to offer.

Just a hundred yards from Arcadia’s famed Round Barn, artist Joel Rayburn recently has opened Glassboy Studios and Tourist Trap Tees, featuring an art gallery, nostalgia shop and studio where he makes and restores neon signs taken from and inspired by the world-famous Route 66.

Rayburn’s shop is in a recently redesigned, century-old building that once housed a grocery store. It features Route 66-inspired art, neon and literature by Oklahoma legends such as author and Arcadia resident Jim Ross and artist Jerry McClanahan, along with famed Route 66 artists Shellee Graham and Alison LaMons. Not only is Rayburn’s neon work featured in the shop, but so too are his handmade T-shirts – each depicting little known legends and myths of Route 66, such as the Regal Reptile Ranch and the Ozark Howler. The shirts feature obscure tableaus and characters and come with a postcard that playfully summarizes each depicted myth.

“Oklahoma, and more specifically Arcadia, really is one of the more artsy spots along Route 66,” says Rayburn. “We want Arcadia to grow as far as small town Americana and artists in residence, but mostly we want to keep things the way they are.”

Rayburn, originally from Eastern Tennessee, fell in love with the route during a cross-country trip on the famed highway with his aging parents. Moved by the disappearing neon signage that once defined the landscape and a generation, Rayburn spent more than a year with master glass bender David Rivers, learning the intricacies of bending glass at 2,500 degrees and the artistic values of gases such as neon and argon – a skill that, if asked, he will happily demonstrate.

“We were looking for a place to live on Route 66 and Arcadia had the best of all the worlds: a small town vibe, an artistic spirit and people that look after each other,” he says. “We’ve got the best spot on the route.” 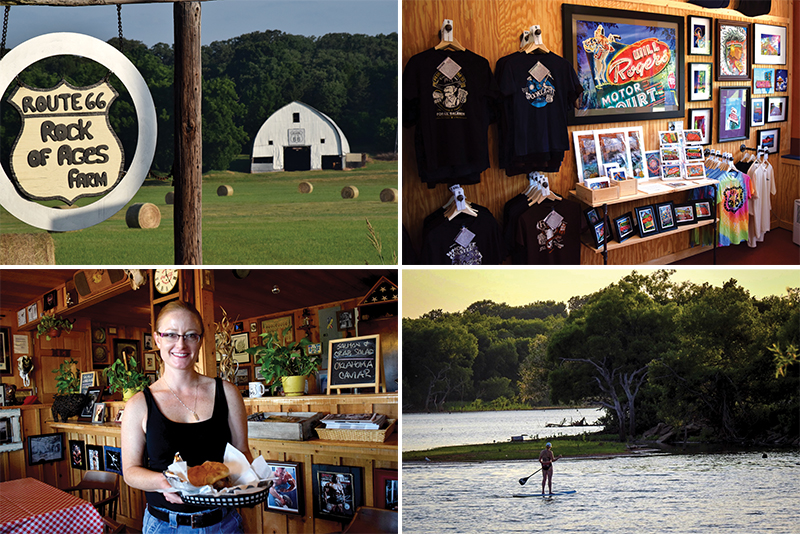 While a sunrise stand-up paddle into glassy water is a tenable description of a typical Santa Monica morning, it’s not exactly the first-conjured image at the mention of Oklahoma City. The University of Central Oklahoma’s outdoor recreation programs have made such an aquatic experience a reality.

Located on Lake Arcadia in Edmond Park just off Second Street (and for the sake of this story, Route 66), the program offers Oklahomans a chance to explore the lake by way of kayak, canoe or stand-up paddleboard – and for those who prefer to stay on land, by mountain bike. Equipment rentals are by the hour and vary in price, and to ensure availability, it is best to call in advance. UCO students, faculty and alumni can use the equipment for free. If you want the “glassy water,” make sure you go in the morning. Afternoons can get a little choppy.

A five-minute drive from Arcadia along Route 66, in a restored old gas station, is some of the best barbeque in Oklahoma. The Boundary on 66, run by husband and wife Donnie Samara and Buffy Price, features ribs, pulled pork, brisket and seasonal specialties such as the wildly popular smoked salmon and crab salad with a side of Oklahoma Caviar.

When Samara first heard of the restaurant’s location, surrounded by nothing but woods and farmland, he was reluctant. However, Samara was in the market to open a different kind of restaurant, and after seeing the space, decided that they had to do it.

“When we started we had no hood, no stove, no oven and no one around … just smokers and warmers,” says Samara. “It was hard to imagine how we survived on that, but we never looked back. We figured that people would like the food and it could become destination dining.”

Whether destination dining or simply escaping the city for a day of neon nostalgia, outdoor water recreation or visiting staples such as the Round Barn and Pops, Arcadia is an Oklahoma town certainly worthy of the term destination.