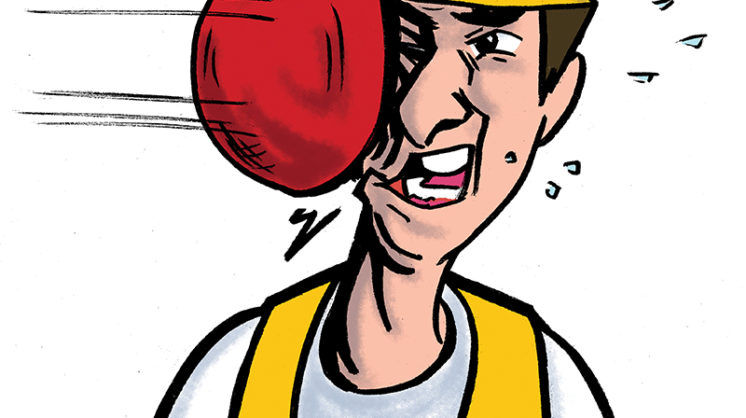 I just saw a season preview for NBC’s “Spartan Ultimate Team Challenge,” which appears to be a showcase of every gym class activity I’ve ever loathed.

“Challenge” contestants give every impression that they’re in it to win it, which prompts the question, who are these people? The logical side of my brain reasons that the participants have lost a bet and, as punishment, are being forced to repeat PE. The I-was-dropped-on-my-head part of my brain says these people may have signed up to climb rock walls and swing from ropes.

The “forced to repeat PE” scenario stirs up one anxiety-producing memory after the next, largely because I equate Pain and Aggression with gym class, where they were probably born and raised before falling in love.

If Pain and Aggression got married and had a baby, they’d name it Dodgeball, the ultimate expression of bullying. The object of the game is to throw something at people and try to hit them in order to exclude them from the game. When you do, you can laugh as they limp away in pain and humiliation. The last person standing in Dodgeball is declared the victor, whose eventual reward will most certainly be a lifetime supply of road rage.

If Dodgeball had a sibling, its name would be Scooter Tag. Like an amusement ride that failed inspection, Scooter Tag was one of those gym class activities that always seemed exciting – Wheeeeeee! Tag on wheels! – until someone got hurt. I’ve never met anyone who played Scooter Tag without sacrificing a couple of fingers to the scooter’s gnashing wheels. I learned early that “Scooter Tag” translates to “Now you won’t get to cut out any fancy autumn leaves this afternoon during art time,” or, “It sucks to be you.”

If Dodgeball and Scooter Tag had a sibling, its name would be Red Rover. On the surface, Red Rover could be mistaken for a community game. Upon hearing the cry of, “Red Rover, Red Rover, send Lauren right over,” you might believe you’ve received an invitation to join another group of peers for fun and gym class hijinks when, in fact, you’ve been deemed “dispensable” by your friends. Just think about that and try not to let your lip quiver during social studies.

If Dodgeball, Scooter Tag and Red Rover had a sibling, its name would be Kickball. Patterned loosely after its innocuous cousin Softball, Kickball is often misunderstood to be a friendly game of rounding bases to score points for your team. What gives Kickball its “kick” is a Dodgeball-esque option to tag a player out by hurling the ball directly at, and successfully hitting, that person.

Running between bases during a game of Kickball, I was once on the receiving end of the speeding ball, launched at me by a girl who grew up to operate a forklift during the week and compete in MMA matchups on the weekend. As I hobbled back to my familiar seat on the bench, I kept my head down and rubbed the welt on my thigh. At the same time, the forklift operator wound up a high-velocity ground pitch to the next kicker and watched as I stepped on the rolling ball and snapped my ankle. The torque of my ankle instantly took my mind off the heat of my welt, but decades later, I’m reminded of both any time the weather changes. And any time I have to walk.

If Dodgeball, Scooter Tag, Red Rover and Kickball had a sibling, its name would be Rope Day. Rope Day in gym class means one thing: blisters. At some point during Rope Day, you’ll be summoned to hoist your body weight up a suspended rope for no other reason than to say you did it. Absent any upper body development, you’ll make it one-third of the way up before sliding back down and setting your palms on fire in the process. If your PE teacher managed to locate two ropes, one of them will be turned into a tug-of-war device to entertain the kids in gym class who aren’t busy climbing the hanging rope. Tug-of-war, another blister producer, is better than the hanging rope because you don’t have to do anything more than make a grimaced expression during the exertion portion of the game to look as though you’re getting all the entertainment value that Rope Day has to offer.

If Dodgeball, Scooter Tag, Red Rover, Kickball and Rope Day were cornered in a gymnasium and got their asses kicked, you’d know that Parachute Day had finally arrived. It also meant that the school nurse had the day off.