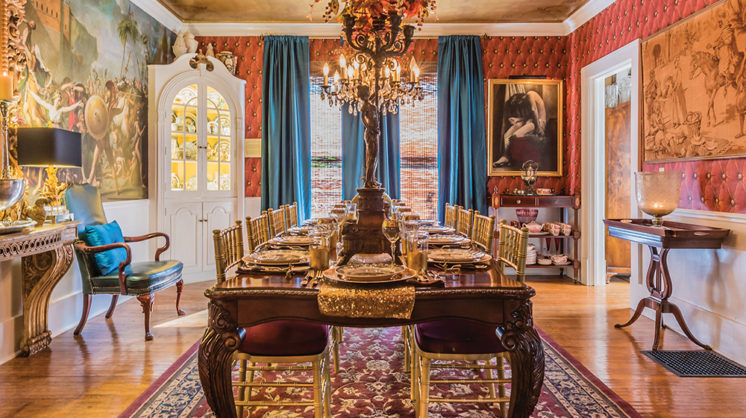 It’s one thing to have a creative, interior design genius in the household, but when there are two, the best possible scenario is that they share the same creative vision. Or at least a love of excess. Of course, genius is not a word to bandy about lightly, although make no mistake: There’s no bandying here.

Richard Bruner and Michael Koenig live in a 115-year-old farmhouse in the middle of Oklahoma City’s historic Gatewood neighborhood. There is no question that the house itself loves the care and attention the couple has lavished on it since taking ownership 15 years ago. It is resplendent, inside and out.

Bruner is the manager of the beautiful gift shop at the Oklahoma City Museum of Art, and Koenig is the visuals manager at Macy’s. The pair met when they were both working as store designers for Foley’s, traveling the country to open new stores. Bruner also served as a designer for Ralph Lauren, ensuring that the company’s boutiques within larger department stores were stylishly aligned with the posh label’s brand identity.

“We moved to Oklahoma City from Houston in 2000, and actually lived in a house across the street from our house,” Bruner says. “It was vacant, and in terrible shape – just horrible. There were squatters living in it, and at one point we looked out and one of the squatters’ dogs was on the roof. It had actually been condemned.”

In the dining room, a stretched canvas reproduction of the classical painting, “The Intervention of the Sabine Women,” by Jacques-Louis David (1799), has been applied to an entire wall. The hand-painted ceiling was done by Koenig and Bruner, and is a work in progress.

Koenig, however, kept watch on the house, and began to form an attachment to it. “I’d go over and look around, and then I’d go look again. Richard went with me and immediately said, ‘No, I want to travel and go to Europe, I don’t want a money pit.’ Well, then we found out that our landlords at the time actually owned the house, and we told them we wanted to buy it. They said, ‘No, you don’t,’ but we did. It took a while, but eventually we got the house, and immediately started working on it.”

The first chores were to remove the group of old sofas that filled the dining room, and to begin ridding the house of vermin. “We trapped 27 mice in two hours,” Bruner says. “Then we started painting. Michael had actually started painting before the deal closed on the house, and he was using Ralph Lauren paint! I said, ‘What if we don’t get the house?’ And he said, ‘Well, the house needed it anyway.’” 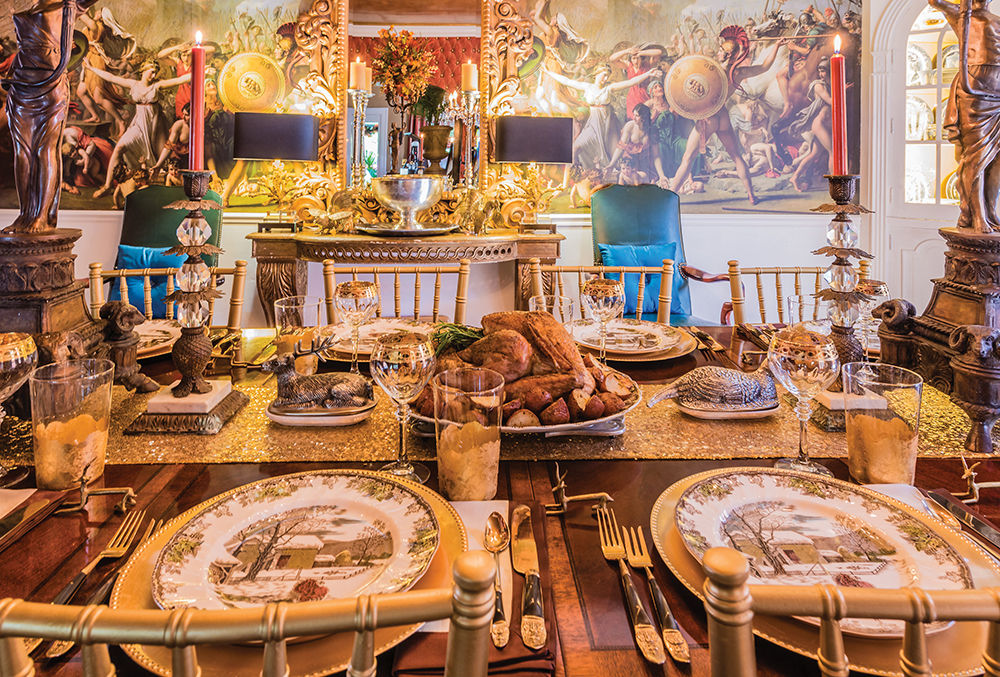 Thanksgiving is a lavish affair in this household, as are Tuesday evening cocktails, Easter brunch or even a morning cup of coffee. The couple has named their home “Allendale,” which combines their middle names.

The pair moved in right away and began work. They moved in the spring, and made it through an Oklahoma summer with no central air. By fall, there was of course a distinct chill in the air, and the need to install central heat and air reached its zenith. Before that could happen, the home’s ancient, rag-tag electrical system had to be evaluated and overhauled.

“Our basement flooded around that time,” Koenig says. “There were 6,000 gallons of water in the basement, and I was down there working in the water, and I realized as I was standing there that the electricity was all located in the basement. Where I was standing knee-deep in water.” To add another wrinkle, the original electrical system was gas-powered, so when it was finally turned on, it had to be immediately turned off because gas was literally coming out of every outlet.

Nowadays, the home is the nucleus of the Bruner-Koenig friend group, whose membership hails from around the country and often descends on this house en masse. The couple loves that their home has become such a connection point for so many. “Everyone loves being here,” Koenig says. “We’ve made the best memories here.”

As many as 15 can easily stay in the spacious, well-appointed home, and sometimes it’s even more than that. “We reserve hotel rooms for people, at wonderful places like 21c, but they never stay in them. Their luggage does, but they don’t,” Bruner says, laughing.

As you can tell, this home offers visitors and viewers a lot to take in visually – see an expanded gallery of images below.