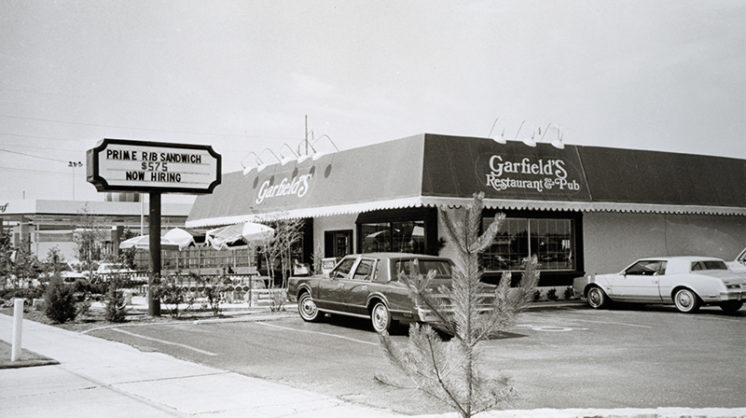 Garfield’s was one of those restaurants that always felt comfortable. The menu choices were consistently prepared to order, the wait staff offered friendly smiles, and the containers of crayons let kids and adults try out their best artwork on the white paper table coverings.

The restaurant was the brainchild of former KOCO-TV news anchor Vince Orza. He made the leap from anchor desk to entrepreneur while working as a marketing professor at the University of Central Oklahoma.

“While at KOCO, I was also on staff at UCO,” Orza says. “I had a small ad agency, as well, and ChiChi’s Mexican Restaurants was one of my accounts. After a year, they hired me as their vice president of marketing. But I kept my full-time position at UCO, and was still working at KOCO – three full-time jobs, but I loved all three. I left ChiChi’s a couple of years later and decided to go out on my own.”

Orza originally thought about creating a restaurant themed around the Oklahoma City television market. It would have been similar to Garfield’s, he said, but would have been decorated with photos and memorabilia featuring sports, weather and news personalities from local TV stations.

“While working in television, I came to realize how much the general public made TV [personalities] celebrities,” Orza remembers. “If the restaurant became a place these celebrities frequented, it would also draw a large number of the general public who wanted to see and be seen with their favorite TV personalities. In the end, the easier route was to create a concept that didn’t depend on celebrities. Hence, Garfield’s.”

The first Garfield’s was located in downtown Edmond, in what is now Othello’s restaurant. Other locations soon followed, expanding into 26 other states from California to New York. At their peak, annual revenue was over $100 million a year.

“Garfield’s came along when ‘fern bars’ were a big deal,” Orza explains. “Those were bars designed for college kids in the late ’60s and ’70s. They were big bars made for young singles, and booze was the attraction. By the early ’80s, we baby boomers had grown up, had families. We grew up eating out at McDonald’s as kids, and at [T.G.I.] Friday’s and Bennigan’s as adults. So when we became parents, we still wanted to eat out, but didn’t want our young kids in a hell-raising bar atmosphere. From the beginning, Garfield’s was designed to be a mix of the fern bar but in a more subdued atmosphere.”

The paper on the tables and the crayons were an idea Orza said he came up with when he saw young couples taking their kids out to eat.

“Kids have a short attention span, and when they get hungry, they want to eat that instant,” he says. “The paper and crayons gave the kids something to do. It kept the kids occupied and the parents are happy, not to mention the people at the tables around the family. Noisy kids drive away business; families in a rush to get out spend less. So I learned to keep the kids happy, keep the parents happy, keep the neighboring tables happy – and higher sales keep the restaurant happy. It worked.”

Garfield’s still has 15 locations nationwide, including one in Bartlesville, but Orza sold the company in 2005, and said he never looked back. Today, he spends part of the year at his home in Edmond and part at a home in Arizona. For the most part, he said, he is basically retired.

“Philosophically, I’m in the late autumn years of my life,” Orza says, “and I want to see and do as much as possible before the leaves fall from the trees and winter sets in.”