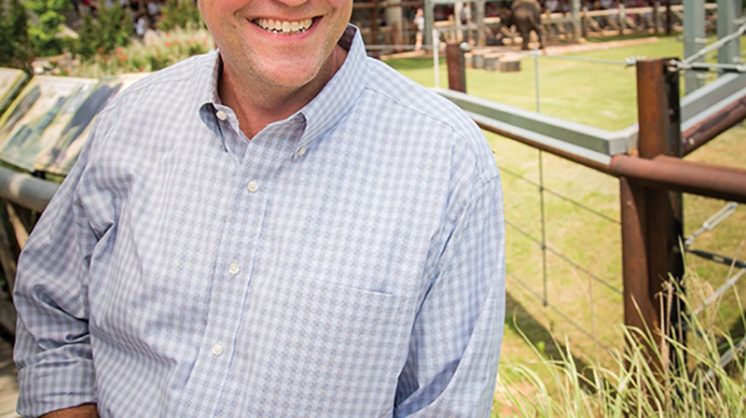 We All Pine For The Dream Job That Feels More Like Play Than Work.

Whether it was his passion for animal conservation, his impressive credentials or the sheer number of snakes that have populated his résumé between grade school and a PhD, the career gods smiled on Dr. Dwight Lawson, who just celebrated the anniversary of his first year as executive director and CEO of the Oklahoma City Zoo and Botanical Gardens.

How long have you been in Oklahoma City?

Just over a year.

Where were you before?

I was the director of Zoo Atlanta before coming to Oklahoma City.

I’m an Air Force brat. I was born in Louisiana, moved to Pakistan and graduated from high school in North Carolina.

What was the focus of your doctorate?

Were you that kid who always had a snake or a turtle your room?

Yes! In fact, I still keep pet turtles in a pond at my house now.

If you weren’t working in this field, what profession would you be in?

I come from a long line of bankers and accountants, so maybe I’d have followed that path. I went to grad school to study snakes in central Africa, so my career has really been a departure from that line of work.

What was your first job?

I was a bag boy at a grocery store in North Carolina.

What are some of your goals for the Zoo?

We’re just opening the (Joan Kirkpatrick) animal hospital and we’re about to have an expansion to the Asian exhibit for the rhinos, as well as a two-story restaurant to overlook the elephant exhibit. I’d also like to see us modernize some of the older facilities in the core structures of the zoo and expand the botanical gardens, creating more of an event space.

Does a guy who studied vipers for years in Africa get creeped out by any other animal?

Certain bugs creep me out. They’re unpredictable. One second, they’re over there; the next, they’re on your neck.

Probably some kind of artistic talent. And I’d like to do a better job at public speaking.

What is the most important lesson you learned from your parents?

They were supportive and taught me to have the confidence that whatever I wanted to do for a career was OK.

Is there anything you absolutely won’t eat?

Meatloaf. Just to look at it …

What should people learn to do?

Get outside! And read. Stop and read the graphics at the animal exhibits. What you learn from doing that is fascinating.

What do you bring to a crowded room?

A bunch of oddball snake stories!

As you look back, is there something you would have started doing sooner?

I might have had kids earlier, but the tradeoff is the schooling that my wife and I both experienced.

Was there a moment along your path that changed the trajectory of your career?

I was a pre-med student at Penn. I ended up in Costa Rica for a course in tropical ecology. I was amazed that people even did this kind of study and I had a professor who was not mainstream at all, but he was extremely passionate about the subject.

What can’t you resist watching if you see it’s on TV?

Do you collect anything?

I think I have more than 200 African masks that I collected while I was there for my field study. I have several pieces of African artwork, too.

What advice would you put inside a fortune cookie?

How do you define happiness?

Having a fulfilling career with a family connection that benefits the community – and finding a balance between that and time with my own family.

If you suddenly ended up having a half-day to yourself, how would you spend it?

I’d putter around the house and spend it with my daughter.

Who do you think you could be mistaken for?

I get Mitt Romney a lot. Interestingly, when I did some field study in Costa Rica, there was another student there who looked just like me and his name was Dwayne Lawson.

What do you wish you were better at saying “no” to?

Several things at work – I like being hands-on, but sometimes I have to tell myself to let go.

Opportunities, second chances and seeing, in hindsight, that some things that didn’t work out at the time actually did work out for the best.