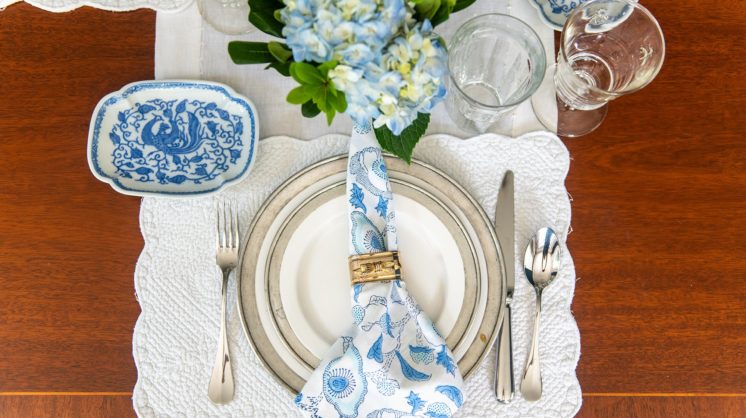 Seven-year-old Mack Thompson walked upstairs to his bedroom, not knowing of the surprise inside. It was his birthday, the day of the big reveal – months of covert planning come to fruition. 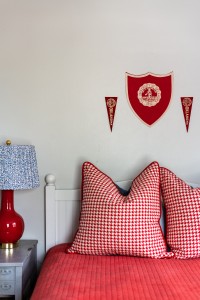 Conspiring secretly with interior designer Ivy Pierce, Emily and Matt Thompson transformed their son’s bedroom from uninteresting neutrals to a “Boomer Sooner” retreat. Vintage University of Oklahoma pennants were tacked to the walls. Drab gray bedding was replaced with spirited crimson-and-cream houndstooth. An indigo-and-red Kantha quilt (hand-selected by Pierce while traveling in India) was added to make it feel more like a big-boy room. A monogrammed pillow on the bed confirmed that, indeed, this space was Mack’s. 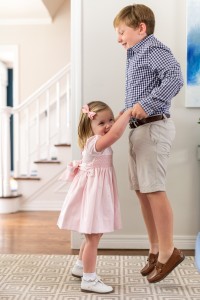 “We asked him to go to his room to get something, and then… it was quiet,” Emily Thompson says.

Mack had no words. He was completely awestruck – and perhaps slightly confused.

“He was just walking around the room with his mouth open,” Thompson says, laughing. “He couldn’t believe it was his.”

It’s not apparent when you tour the Thompson’s well-appointed home – classy and uncluttered, traditionally styled with crisp whites, varying blues and notable artwork – but most home decisions were made with their two small children in mind. 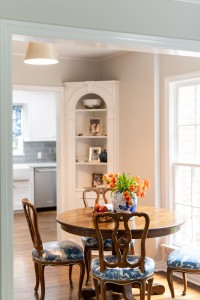 “We wanted something kid-friendly and comfortable,” Thompson says. “We couldn’t be worried about sitting on the chairs.”

“You don’t have to sacrifice a good-looking house when you have children,” Pierce says. “For example, a lot of people think you can’t do white. We did light linen chairs in the living room, covered in Perennial Fabrics from Restoration Hardware. The fabric is bleach cleanable, which is amazing – good for kids, pets and adults.” 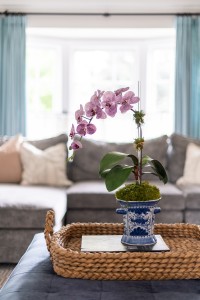 Another kid-friendly choice: the blue velvet ottoman (also upholstered in Perennial Fabrics) used to anchor the living room instead of a hard coffee table. A large tray placed on the ottoman provides an ideal surface for drinks and décor.

The Thompsons purchased their Crown Heights home in 2016 to gain more square footage. At the time, Emily was pregnant with Mary Stuart, their second child. The 38th Street location, across from Crown Heights Park, seemed to beckon their growing family. 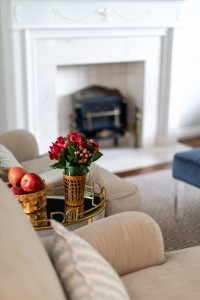 To create a fresh space before they moved in, the Thompsons hired general contractor Hunter Magness to completely renovate the 1940s property. However, the clock was ticking. The Thompsons hoped to settle into the home in just seven weeks, right before the baby’s due date. Magness’s team had little time to tackle a lengthy checklist, which included refinishing the hardwood floors, painting every room (the colors Pierce recommended), knocking down the wall between the living room and breakfast nook (to improve flow), changing out light fixtures, reconfiguring the master closet and bath area (to maximize space) and updating all the bathrooms and kitchen with new marble tile and countertops. 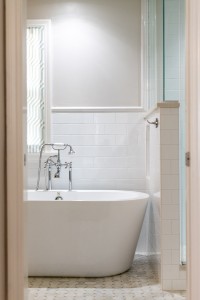 “Hunter was such a big part of getting us here in a timely manner,” Thompson says. “There are always little hiccups in a renovation – not everything is going to go perfectly – but they were always here to make it right.”

Thankfully, Magness and his team made his deadline. The pale pink nursery was prepared. Blackout curtains, featuring pink Greek key trim and Lucite-and-brass hardware, were installed with barely a week to spare. Mary Stuart was born, and the Thompson family felt whole. 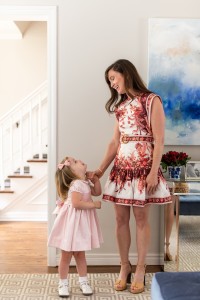 “We wanted the home to be family-friendly, beautiful and timeless – keeping with the home’s traditional architecture,” Pierce says.

Pierce sourced antiques from places like K&N Interior Consignment to mix in with new furniture. Cherished family pieces also found a home here. The breakfast nook features Emily’s great-grandmother’s table and chairs, upholstered in an F. Schumacher & Co. fabric, also used for the Roman shade over the kitchen sink. Pierce applied a matte laminate to the fabric for a wipeable finish. 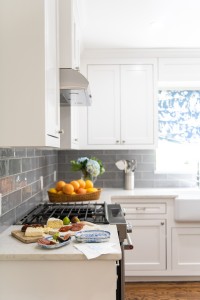 “This table was in our breakfast room in Shawnee, in my great grandparents’ house, built in 1922,” she says. “We moved in when I was three, and my parents still live there.”

The Thompsons’ appreciation for older homes is rooted in their upbringings. Matt Thompson grew up in Crown Heights, and his parents still live in the neighborhood.

“We wanted an older home for sure,” Emily Thompson says. “The crown moldings and the built-ins make this home feel a lot like my house in Shawnee.” 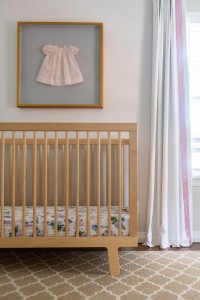 Some of the home’s décor was inspired by Rivers Spencer, a New Orleans designer who specializes in blending traditional and transitional designs. Thompson would share ideas she saw online with Pierce – like a large hand-painted mural in the dining room she saw in Spencer’s portfolio. Pierce commissioned mural artist Susan Harter, discovered via Instagram, to create two three-by-six panels of pastoral scenes to achieve this effect and create art that can go with them, if they ever move in the future.

“I feel like the choices have all been thoughtful because we weren’t rushing through it,” Thompson says.

Meaningful art on the walls makes this home feel distinctly theirs. The kids’ rooms each feature a Feltman Brothers outfit, framed in matching shadow boxes so they can be hung together one day. Mack’s baby blue bubble romper is the first item the Thompsons purchased when they found out they were having a boy. Mary Stuart’s pale pink dress is the one Emily wore as a newborn coming home from the hospital. It was framed after Mary Stuart had photos taken in it. Two small abstract paintings by Marjorie Wetwiska, multi-colored with a dash of bright pink, play up the pinks in the nursery.

When Matt Thompson heard there was a family connection to artist Denise Duong (Emily’s brother-in-law is married to her cousin), he was eager to commission a family portrait. Today, Duong’s mixed-media piece is proudly displayed in the dining room. It shows the Thompsons with their late family dog and a windmill-dotted farm in the background.

“It’s one of our most prized possessions,” Thompson says. “It’s very Oklahoma with the wind sweeping down the plains.” 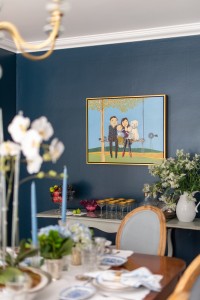 “Matt and I come in here when the day is over and we’re done with kids,” she says. “This is our space, and it feels serene.”

Just down the hall, Mack’s bedroom was the grand finale in the Thompsons’ interior design process. The room reveal occurred in July, after summer vacations were canceled and it became apparent the family wouldn’t be leaving the house any time soon. However, you won’t hear any complaining.

“We’ve been home so much since March, and we are so grateful for it.” Thompson says, adding that she sent Pierce thank-you texts while in quarantine. “We’re here all the time now, but it’s not so bad being stuck in your beautiful home.”