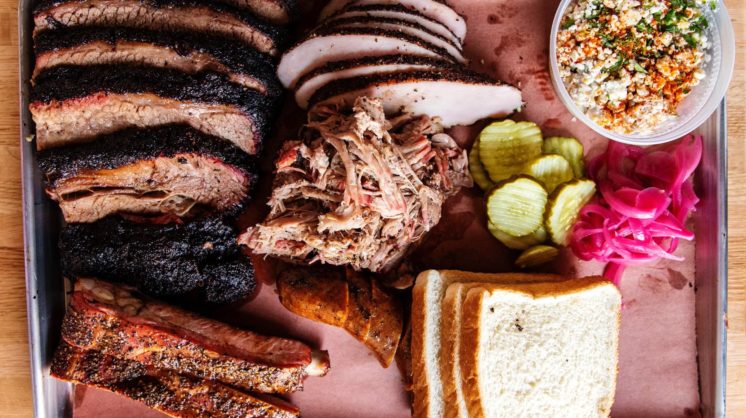 Zach Edge grew up in Norman, but his family’s southeast Texas roots shaped his palate and inspired his love for central Texas barbecue. The owner and pitmaster of the newly opened Edge Craft Barbecue at 1920 Linwood in the Ironworks District said his mother’s family hosted big backyard barbecues for get-togethers.

“My grandpa and uncle used a small offset smoker in the backyard, and my earliest memories are of watching my grandfather tend the fire, and then of course eating it at the end of the day,” Edge said.

After graduating Norman North High School, Edge eventually headed to Summit County, Colorado, where he spent 10 years in professional kitchens, learning to cook in resorts and fine dining restaurants. At the end of the 10 years, he came home to Oklahoma and took a gig at Cultivar in Automobile Alley.

“I was watching central Texas barbecue blow up around Texas, and there wasn’t much of it happening in Oklahoma,” he said. “At that time Larry Dean Pickering was still finishing some of the build out, and I told him I was thinking about moving to Texas to start making barbecue. He connected me with Todd Woodruff, and I got in on the ground floor of Maple’s.”

With Edge Craft, a seasoned and confident Zach Edge brings all his experience to bear on offering central Texas barbecue in Oklahoma City. The results so far are impressive: excellent prime brisket, ribs, pulled pork, and house-made sausages, as well as seven sides, including the wildly popular smoked elotes.

“We make our sausage in the style called ‘hot gut’ in Texas,” Edge said. “It’s heavy on black pepper, garlic, and cayenne. It’s the way pitmasters stand out in Texas. They all make really good brisket, so house-made sausages are their chance to put their own spin on the product. They take great pride in it. So do I.”

The sausage is made from prime brisket trimmings, and Edge said he’ll eventually have two styles year-round, and then feature one-offs as weekend specials. Sides will rotate, too.

“My training is as a chef, so I practice seasonality,” he said. “That means the elotes will go off the menu in winter, and then I’ll rotate something else on.”

Edge Craft should have its license to sell beer very soon, and Edge said he’ll have macrobrews like Bud and Coors Light, as well as a good selection of local craft beers. The restaurant is open Friday, Saturday and Sunday from 11 am until it sells out, and it’s sold out every day it’s been open so far.