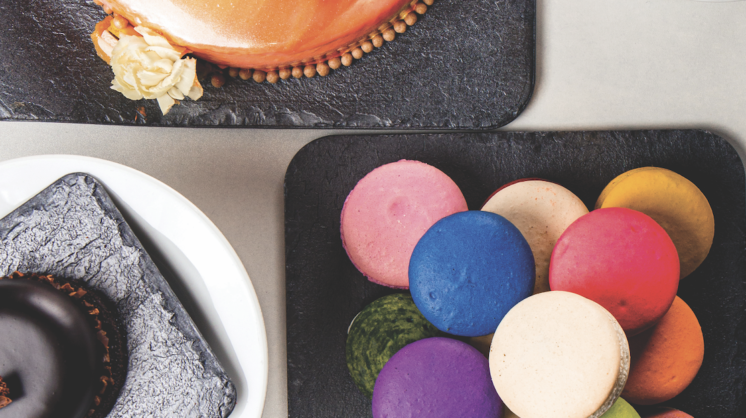 Ganache Patisserie could have been a churrascaria, sort of.

Husband-wife chef-owners Matt Ruggi and Laura Szyld were looking to start a restaurant and their Argentinian backgrounds made the meat-centric churrascaria idea the first to come to mind. “I was thinking we needed something like Texas de Brazil in Oklahoma City — and then Texas de Brazil opened, and we were on to the next idea,” Ruggi says.

However delicious their meat dishes could have been, we can all celebrate the fact that what they ultimately opened was a patisserie with hand-painted chocolate truffles, classic croissants, pastries and macarons. “We are much more committed to this concept than we ever could have been to a churrascaria,” Ruggi says. “This is our passion; we are committed 24/7, in the shop, talking to customers.”

The Chisholm Creek location near Memorial Road and Western Ave., was a bit of a risk at first. Szyld said the center was only about half full when they opened, but they liked it better than some of the other options they considered. “Eventually, though, people came because we are the only thing like this in the city,” she says. “It’s been a process of helping people understand what we are, too, even on things like croissants, which we do in the classical French style. People thought they were burned, but this is what a croissant is, and it should never be reheated; that only ruins the beautiful texture and flakiness.”

Both chefs trained in Argentina — where Szyld was born and Ruggi was raised — and France, and their techniques are classic, focused and meticulous. “The chocolates are a three- to four-day process,” Szyld says. “Matt paints them by hand, so it’s a huge time commitment.”

The pastry case would be beautiful in any setting, looking very much like colorful, culinary art, but the neutral tones of Ganache’s interior — lean, modern and sharply lined — paired cohesively with the bright colors of the macarons. Painted chocolates and brightly iced sweets practically burst from the case. The only problem you’ll encounter at Ganache is overcoming choice paralysis. “When people ask what they should try first, I tell them you really can’t go wrong,” Szyld says.

The menu also includes breakfast and brunch options, and the winter months mean soup options. Ganache is a scratch kitchen, and the two chefs are trained in both savory and sweet. That they make their sandwiches from the beautiful breads they bake in-house only helps to point out how much Oklahoma City needs more freshly baked bread options

“We moved here from Connecticut to be near Laura’s parents,” Ruggi says. Her father is a professor at OU Health Sciences Center. “The main cultural difference is how much back East is similar to the Old World. I was born in Italy, and there you can always find fresh bread. I was surprised when I came to Oklahoma that fresh bread was so hard to find.”

Many of the sweet items in the case come in two sizes: standard and bite size, which doesn’t necessarily make choosing easier, since most people end up getting a sampler of bites. Full-size cakes are available, including custom cakes with a week’s notice. And by the way, the coffee is exceptional at Ganache, and the menu includes a small wine list, a very continental way to do breakfast or brunch.