Energy FC Takes Season Off Due to Stadium Renovations - 405 Magazine 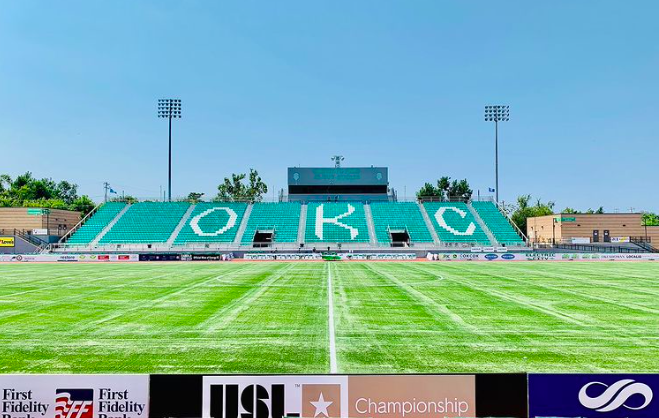 When soccer fans across Oklahoma heard of plans for Taft Stadium’s renovation, many were thrilled at the idea … until it became clear that Energy FC would be forced to take a season off due to the construction. Without any upcoming matches, concern arose over the team’s ability to perform on the field and in the community while maintaining the same level of individual skill. Despite this considerable roadblock in Energy FC’s path, the program is working to ensure its players have the best opportunities readily available to them, as well as the chance to branch out and test new environments.

“With Energy FC not playing matches, we want to make sure that any players we have under contract are able to compete in matches to maintain their fitness and continue to play soccer,” said Billy Walton, director of marketing and communications for the team. “We value our players greatly and want to make sure that they are not negatively affected by this stoppage. We have been able to work with each individual player under contract to find them a new team that is acceptable for their situation and leads them to continuing their development as a professional. This was a difficult decision, but we believe it to be the best for both the player and the club. There really isn’t any replacement for the development that comes from playing in a match, for a soccer player.”

Energy FC’s dedication to providing its team with unrelenting support aims to encourage the public to follow suit. Since the past few years have created incredible difficulties for athletes to perform and receive public engagement due to the pandemic, the Taft Stadium remodeling is one more bump in the road.

“We will most definitely remain involved in the community in order to help other groups make Oklahoma City a better place to live, work and play,” said Walton. “I have already had discussions with several of our community partners to find out how we can help their missions given our current situation. Everyone has been incredibly understanding and excited to find new ways to help each other succeed, and help the people of OKC.”

If anything, Energy FC’s off-season gives the players, coaches and staff a chance to reflect. “We believe we can truly take a comprehensive look at how we have operated over the past 9 years,” said Walton. “We are honest enough with ourselves that we can see mistakes that were made in the past. With no matches, Energy FC can focus on how to best serve our fans and Oklahoma City in the best way possible. We really want to thank our fans for their patience and continued belief in the club. Like them, we are counting down the days until we can get back together as a city and watch Energy FC on the pitch once again.”