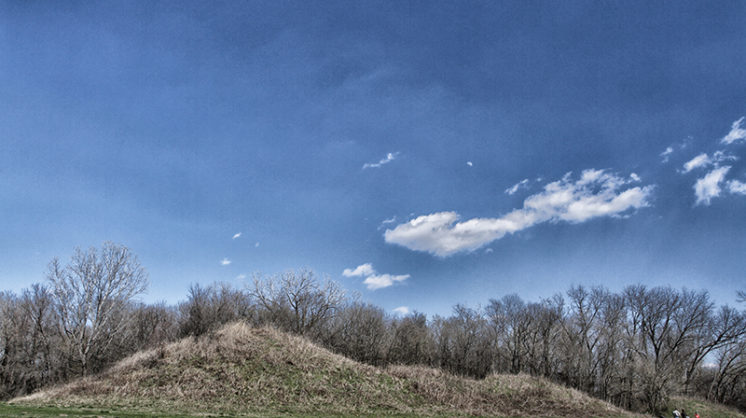 Ancient civilizations created statues and temples that still have mysteries to be solved. In Oklahoma, we have the Spiro Mounds. Located seven miles outside of Spiro in southeastern Oklahoma, the mounds were built by prehistoric Native Americans. According to the Oklahoma Historical Society, it is one of the most important Native American sites in the nation and Oklahoma’s only state archeological park that is open to the public.

“There is no other place like it,” says Dennis Peterson, manager of Spiro Mounds Archaeological Center.

Over the previous 8,000 years, people had camped nearby while passing through the area, but it was not until later that the location became established. During the Mississippian period, 800-1450 A.D., the site formed as a permanent settlement, and the Spiro leaders developed political, religious and economic ties with those as far away as the Gulf of Mexico and the Great Lakes. This powerful and influential group shared horticulture, mound building, ceremonies and an iconographic (picture) writing system with more than 60 tribes.

With the site located on a bend of the Arkansas River, the group could travel anywhere from coast to coast within five weeks. This gave them great economic power, and from 900 to 1300, the residents prospered. Peterson explains that the Native Americans who inhabited Spiro Mounds were major players on the national scene, as indicated by what was discovered at the site centuries later. 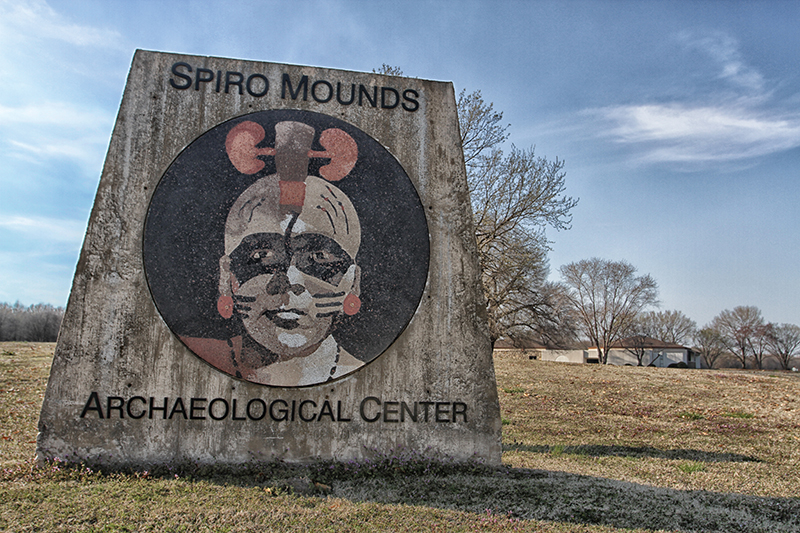 In the 1930s, excavations revealed one of the greatest collections of artistic and utilitarian prehistoric Native American artifacts in the United States. The treasures included conch shell engravings, exotic stone, fabric and copper. Widespread looting of the site led to Oklahoma passing state laws in 1935 to protect antiquities – it became one of the first states to preserve and research archaeological sites – and despite the looting, the discovery was immense and extraordinary.

“It is the King Tut of the West,” says Peterson. “It gives us an incredible look at their lifestyle.”

One three-dimensional piece, called the “Smoker,” is an effigy pipe made of red flint clay and is more than a foot in length. Made at the Cahokia site near St. Louis in the 1100s, it was brought to Spiro as part of an exchange between chiefdoms. The art, Peterson explained, gives us a view of what it was like 1,000 years ago, just like a photo album. Although many questions about the Native Americans and their lifestyle have been answered, there are still riddles to be unraveled.

“It opens our eyes as to how complex this system was,” says Peterson.

The Spiro Mounds site, which is on the National Register of Historic Places, has 150 acres, including 12 mounds, the elite village and a segment of the support city. To schedule a tour, contact Dennis Peterson at 918.962.2062 or spiro@okhistory.org.

Peterson will lead guided tours of the Spiro Mounds site during three Winter Solstice Walks on Monday, Dec. 21, at 11 a.m.; 2 p.m. (this sunset tour sees the sun set with the alignment of the mounds); and 7 p.m. The tours will last 1 1/2 – 2 hours and require about a mile of easy walking.

On the tours, visitors will learn about:

• the reason the mounds line up with the sun

• the elaborate ceremonies that took place

• the festivities that occurred in the plaza area

• the spiritual and political connections of the Spiro Mounds people

• the age people lived to be during  the 9th-15th centuries