Every Meal a Celebration - 405 Magazine 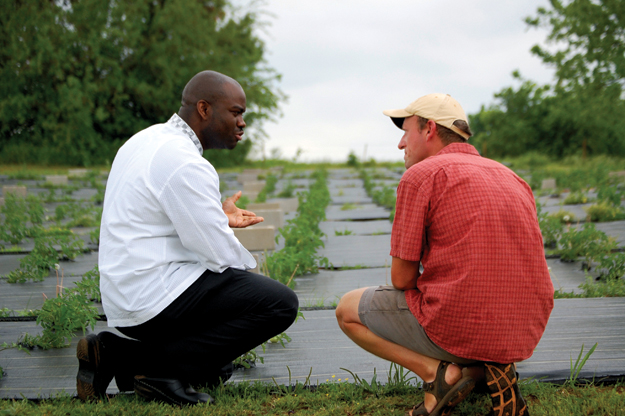 Andrew Black has no pictures of himself before the age of 21. His family never owned a camera. He grew up with his grandmother and brothers on 30 acres in the “deep country” of Jamaica. It was a life of subsistence, the family eating what they grew: sugar cane and avocados, mangos and breadfruit.

It was a hard life. At age 15 he left home – and found an even harder life working in a hotel. He labored for no pay, only food. He cleaned 18 refrigerators and juiced 3,000 oranges every day. He slept on a hard board in a changing room for two years.

Black has come a long way. He has traveled the world as a chef, working in Paris and for the legendary Peabody Hotel in Memphis before adopting Oklahoma City as his home, first as executive chef at the Skirvin Hilton, now at the Colcord Hotel. But while he has come far – in both miles and situation – he has not forgotten the delight of food or the freshness and goodness of food grown close to home.

“Cooking is play time,” Black says. “I have never worked a day in my life. I get paid to practice my art every day. You have to have fun with it.”

In his new book Foraging in Oklahoma, Black shares the fun and joy not only of cooking, but of meeting those who produce the food. The result is a journey into the farms and ranches of his adopted home state.

“When I came here years ago,” Black recalls, “I was told to be ready to cook nothing but steak and potatoes. And I thought, ‘No way!’ Traveling and meeting the people, seeing the farms, seeing the peanut farm and the peach farm and the pumpkin farm, I knew there was more and I wanted to get it out there for everyone to see.”

From Foraging in Oklahoma:

On his childhood in Jamaica:
Getting up every day, there were times we didn’t know what the next meal would be. And that’s where creation would begin…We were eating things that were good for us without even knowing. And it goes back to making the most of things you have.

On starting his journey into Oklahoma farms and ranches:
I was asking visitors to the hotel, “What is grown here in Oklahoma?” They’d respond beef, wheat, nothing else. I didn’t believe them.

On the concept of using Oklahoma-sourced food items:
We would showcase the farmers, what we found at their farms, and use what we found at their farms in our restaurant. And we would make recipes using their goods, things made in Oklahoma, instead of being shipped from elsewhere. We wanted to give back to the community, give back to the farmers, and use our local products.

On farm life:
We’re around these children who never drank a soda, they don’t eat processed food. And they’re happy and they’re healthy. They’re running around in the mud having fun. And this is the life of the farmer. It’s amazing.

Visiting the farms, seeing the stunning beauty of the Oklahoma land under cultivation, Black had the idea to turn his trips, and some of the resulting recipes, into a book. He took his idea to hotel general manager John Williams, with whom Black worked at both the Skirvin and later, the Colcord. They turned to journalist and author Steve Lackmeyer. A reporter and columnist at The Oklahoman for over two decades, Lackmeyer is also the author of three books about downtown Oklahoma City history: OKC Second Time Around, Skirvin (both co-authored with Jack Money) and Bricktown.

“They needed an author, and I think I was the only one they knew,” Lackmeyer says with a laugh.

“I knew Steve would keep the story honest, that he would respect what we do and who we are,” Black says.

“I had only written history books up until this point,” Lackmeyer continues. “I was looking for an opportunity to change a bit, to look for something different. When Andrew and John Williams first brought this to me, I was intrigued because this is not just a cookbook. There are great recipes in it, but there’s much more. It’s storytelling.”

The challenge for Lackmeyer was to write in another person’s voice – a voice with a decidedly Jamaican accent. The two men met on a series of Saturdays over a one-year period, and Lackmeyer began to understand Black’s trips to Oklahoma farms and ranches. Lackmeyer even accompanied Black on some of the journeys.

“I got to see Andrew interact with these farmers and ranchers, and see how he connected with them,” Lackmeyer says.

The result, published by OKC’s Full Circle Press, is a well-told tale of trips to places like El Reno and Stratford and Wewoka. The stories of farm families and their way of life elevate Foraging in Oklahoma beyond the typical made-in-Oklahoma cookbook. The recipes are here – ones Black often developed after meeting farmers and ranchers – but above all, the people are here, accompanied by the stunning food photography of J.D. Merryweather, who is also co-owner of COOP Ale Works… another featured destination in the book.

Black and Lackmeyer weave the story of Black’s subsistence childhood into the present and his very real, never staged, encounters with Oklahomans who work the land. At one point Black tells of his first trip home to Jamaica in over a decade, and revisiting a coconut tree he planted as a child.

“You plant something as a kid, and you grow up and have been away for so long. But then you go back and now it’s this big tree. The limbs are beautiful, it’s producing coconuts and I thought, ‘That’s how far I’ve come.’”

Foraging in Oklahoma is a story about food, but it is also a story of one man’s journey, and those he encounters along the road. “It’s mainly about the places I’ve been and the people I’ve met,” Black says. “But I never forget where I came from. The cooking is an additional talent that was given to me, but meeting and respecting the people gives me more joy than anything else.”

Season chuck roast with olive oil and coat generously with Montreal steak seasoning. Combine flour mixture in a large mixing bowl, then dust the chuck roast with seasoned flour and set aside.

Place a Dutch oven or large pot over high heat with 2/3 cup olive oil. When the oil is close to smoking, place the roast in the pot and sear on all sides until golden brown. When the roast is golden brown, add the red wine and let reduce by half. Then add 1 cup chicken stock, enough beef stock to cover the roast and half of the vegetables and chopped herbs. Bring this to a rapid boil and cook for about an hour, then lower the temperature to a medium heat. About 30 minutes before the roast is finished, add the remaining herbs and vegetables and continue cooking until vegetables and roast are tender.

Foraging in Oklahoma is available exclusively at Full Circle Books, 50 Penn Place, or may be ordered from the store by calling 842.2900.