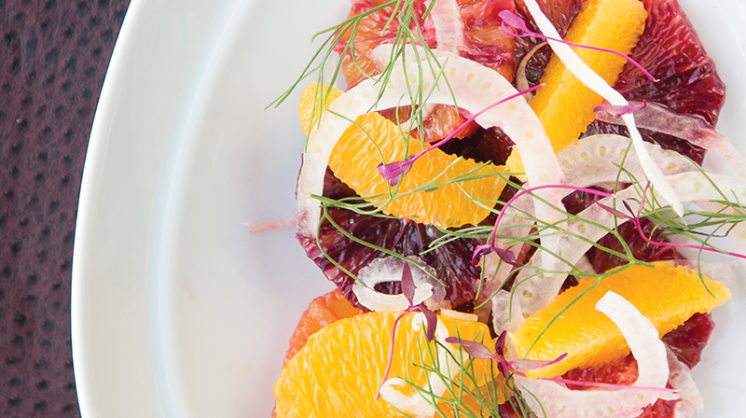 Eating a diet free from animal products is by no means a new idea – but it is often still difficult to find vegan options that aren’t afterthoughts in mainstream restaurants. That may be in the process of changing, though, as establishments like Vast plan to elevate the perception of thoughtful meat-free dining.

Vegan cuisine exists on the periphery of mainstream food culture, not as a trend, but as the preference of a small minority of diners who choose a plant-based diet based on convictions or nutrition. In May, though, Chef Kurt Fleischfresser added vegan to the menu at Vast, and not as an afterthought. Does the city’s most visible restaurant adding a vegan menu signal a shift in the culinary landscape of Oklahoma City?

Some ethnic foods (notably Indian) provide traditional vegan options. Vietnamese diner Pho Ca Dao on NW Classen even has vegan pho that uses mushroom broth instead of meat stock. Andrea Koester, the co-owner of mobile donut and pastry vendor Holey Rollers – which produces vegan pastries – says that vegan can be done well if there is a commitment to it.

“One of the main reasons vegan has been easier for other cultures is that they don’t share our obsession with cheese. That’s why Indian restaurants typically have so many vegan options: no cheese and no cooking with animal fat.”

Holey Rollers sends out their donut truck a couple of times a week, and many customers have no idea they are eating vegan, partly because the donuts are so good and partly because vegans don’t typically have a ton of dessert or pastry options.

The typical experience of vegan diners is very consistent. Greg Dimond, a regular at Elemental Coffee – a destination restaurant for vegans in the metro – said he has seen many restaurants where a salad or veggie plate was all that was available. “I was in a popular Tulsa restaurant recently that specialized in smoked meats,” he says. “All they could put together was a head of iceberg lettuce, quartered, with tomatoes and vinaigrette.” 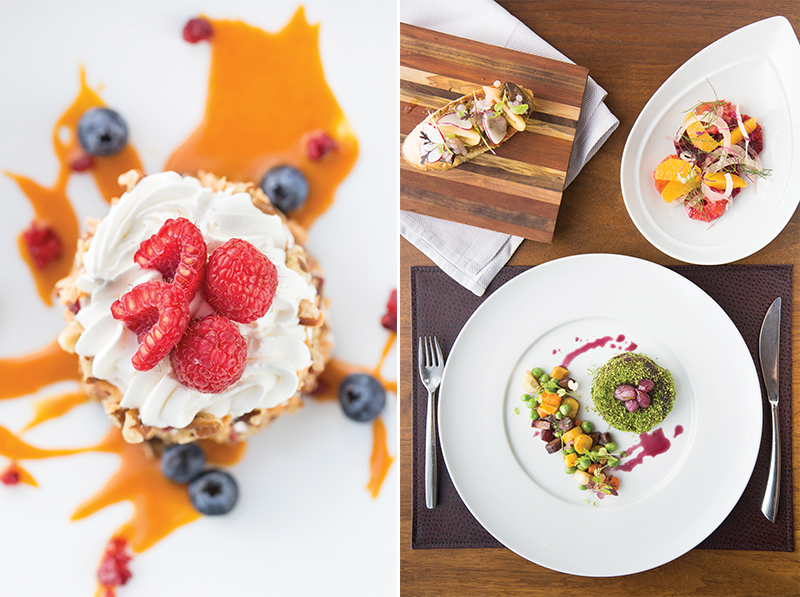 Fleischfresser said that is not atypical for restaurants that don’t have a commitment to vegan dining. “It’s frustrating for a customer to discover that a restaurant only has steamed broccoli or cauliflower or a salad,” he explains. “At the same time, it’s really difficult to make good vegan food if you don’t plan for it.”

Vast Executive Chef Patrick Williams came up with the idea of a trial vegan menu. The restaurant has several regulars who are vegan, and while Williams and Chef de Cuisine Kevin Le could put something together with a little advance notice, Fleischfresser said making menu items part of daily prep makes for better quality, simply because good stocks and purees take time to do right.

“Kevin Le has spent a lot of time on this menu,” Fleisch-fresser says. “He is not looking up recipes online; he’s creating them himself.”

For the May dinner, Le made tomato carpaccio with smoked onion jam, beet risotto with chive oil and rigatoni pasta with morel mushrooms and English peas. In other words, he is not just throwing together veggie plates or boring salads.

Le was a graduate of Fleischfresser’s apprenticeship program at The Coach House, and Fleischfresser said Le excelled at the vegetarian/vegan element of the curriculum. “The training is technique-driven,” Fleischfresser says, “but how you apply the techniques is up to individual chefs, especially given the large number of fresh, local ingredients we have to work with.”

The vegan menu is available the last week of the month and only at dinner, and features a four-course meal – usually an appetizer, soup/salad, entrée and dessert. Optional wine pairings from Vast’s expansive list will be available at an additional cost of $20. Fleischfresser asked that interested customers make a reservation and inform the restaurant that they are coming for the vegan menu.

July will be the last month of the official experiment unless it is well received. Diners who give it a try might find themselves with a new perspective on vegan flavor.