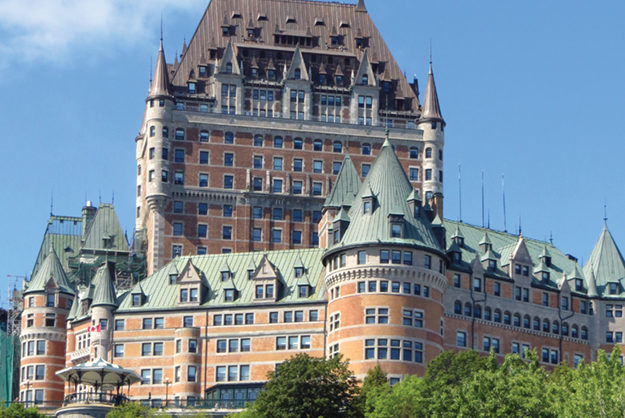 The impressive Chateau Frontenac towered over me as I climbed the stairs to the Dufferin Terrace. The area was alive with tourists – some looking over the protective fence at the St. Lawrence River below, some gathering around a troupe of acrobats performing at the base of the statue of Samuel de Champlain, others strolling or jogging along the boardwalk. Straining, my ears picked out a faint melody – Leonard Cohen’s “Hallelujah.” As I walked closer, I saw an attractive blond singer, Louisette Couture, who had set up a small stand with a mini-sound system and CDs to sell. I noticed several others who had also stopped to enjoy the music. As Louisette reached the chorus, I could hear two women singing along softly. Feeling brave, I added the alto. Next chorus, we grew more confident. As the song ended, we smiled at each other – no language barrier here – and went our separate ways. That moment defined Quebec City for me.

Founded by Champlain in 1608 as the First Permanent French Settlement in Canada, the tiny community began on the banks of the St. Lawrence River – a section now referred to as Lower Town. Upper Town, atop the cliffs for defensive purposes, is a few years younger.

The historic Old Town (Upper and Lower Towns) is surrounded by an impressive wall – the only walled city north of Mexico. The area is very walkable and while there are several staircases and roads winding down the hill into Lower Town, a funicular makes the trip easier.

My route of exploration this trip was inspired by a book: Louise Penny’s “Bury Your Dead,” the sixth book in her mystery series featuring Chief Inspector Armande Gamache. I read this first because the mystery was set in Quebec City – my destination – but I’m now hooked and wish I’d started with the first novel.

As I read, I kept track of locations mentioned, like the crime scene and restaurants, and planned my route to visit them. I started with breakfast at Paillard’s on St. Jean Street. In Quebec, you will always be greeted in French, it’s the law – but most people are bilingual. I was determined to try my French and everyone was patient and charming even when I had to give up and fall back on English.

Next: the crime scene! In the book, a body is discovered in the basement of the Literary and Historical Society of Quebec – more correctly, in the Morrin Centre, which houses the Society. This stark, gray stone, Palladian-style building has a venerable history. The Redoute Royale – a military installation – stood here in the 1700s. In the early 1800s the first Canadian jail was built on the site – with the occasional miscreant swinging at the end of a rope from a balcony above the main door.

In the late 1800s, it was home to Morrin College and, since 1924, the home of the Literary and Historical Society. Today it functions as the only strictly English library in Quebec.

Visitors during summer can take guided tours of the building including part of the old jail, remnants of the college (with one of the world’s oldest darkrooms) and the library. The rest of the year, tours are by reservation only and limited to groups of eight or more. I noticed several people carrying the Louise Penny book waiting to take a tour.

Tours Voir of Quebec offers a Bury Your Dead walking tour that includes the Morrin and a number of other sites – haven’t tried theirs but it looks good.

Just outside the city wall is the Faubourg Saint-Jean – a “suburb” dating back to 1792. No murders here … except for my diet. Erico Chocolates and chocolate museum would have enticed me without my mystery. Handiest thing I learned there: how to say chocolate in 19 languages! And just down the street is J.A. Moisan, the oldest grocery store in North America. Founded in 1871, this gourmet grocery is like stepping back into another century – with many contemporary touches. I’m not sure that ladies of the Romantic Period bought seafood salad and flavored tea, but I did – and enjoyed a lovely lunch back in my hotel room.

While there are interesting museums and historic old churches to visit, the city itself always lures me away from more determined touring. What a pleasure just to wander up and down narrow streets, passing sidewalk cafes, street corner musicians and alleys lined with artists’ wares. Shop windows decorated with a French flair lure buyers through the doors. I always love the displays in C’est Si Bon – their summery tricycle covered with candy looked good enough to eat … and it was.

As much fun as simply wandering is, it’s even more fun when you realize what you’re seeing. Steeve Gaudreault, owner of Cicerone Tours, took our group around the major historic areas and, dressed as Quebec’s first permanent settler Louis Hebert, made history come alive.

Another day he took us out of the city to the Ile d’Orléans, a beautiful little island in the St. Lawrence River. About the size of Manhattan, it’s home to 7,000 to 10,000 people, depending on the season. Main features: wineries, fertile farmland, artisan cheese, chocolate, small shops, galleries, bakeries, restaurants, charming houses – and no fast food or big box stores.

Don’t shortchange yourself by trying to rush through Quebec City – it’s like a fine wine. Take time to engage all your senses. Leave time for the little surprises that the city offers so often. And if you hear singing, join in the chorus!

Hilton Quebec High-rise hotel just outside the city wall. Ask for a room with view of the Old City. hiltonquebec.com