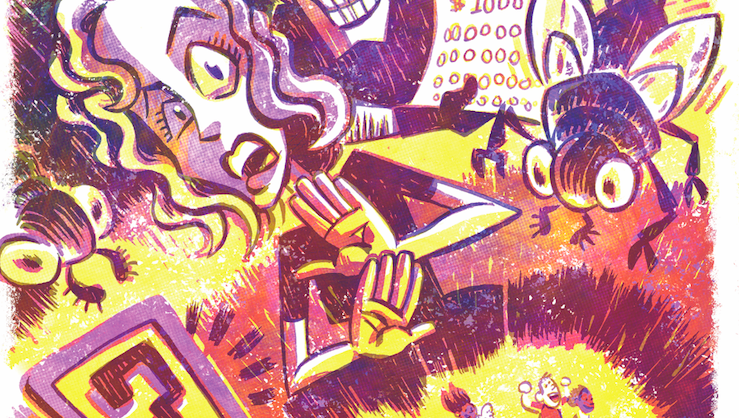 Mr. Roth and I recently were intrigued by a Facebook post from a friend who, while sheltering in place, had stumbled upon the psychological thriller Nocturnal Animals on Netflix. According to our friend, the movie’s storyline was so intense that she and her husband had to watch with the lights on. To ease their lingering trauma afterwards (and somehow coax him out of the fetal position), the couple resorted to watching five Disney movies in succession. We’d been warned. Nonetheless, I cast the THREAT-LEVEL: RED warning to the wind.

Ten minutes into date night, I was rocking in a fetal position when Mr. Roth got up to turn on every light in the house. At the 20-minute mark in the two-hour movie, we were scrambling for the remote with the urgency of a couple of rats on crack. We couldn’t go on! How, we wondered, could anyone get through it? It would take the entire Season 8 of “The Great British Baking Show” to shake off our own trauma.

Scare-tastic movies aren’t the only things that terrorize me more today than they did when I was a kid. My phobia list grows with every passing year.

Riding shotgun. Remember riding shotgun when your older friend got his or her driver’s license? Today, its only appeal is arriving alive and, quite frankly, it’s exhausting: “Oooooh, watch out for that guy!” “They’re all stopped up here – stop. Stop! STOP!!!” “It’s green, love. Love? You’re about to miss the light.” “You need to be in the right lane or you’re going to miss your… OK, you can turn around up there.” “Tell that guy to kill his high beams! It’s like I’m getting LASIK in here!”

Roller coasters. Every time Six Flags introduced the next big roller coaster, I gladly hopped on it, multiple times, laughing at all the steep drops, the loop-de-loops and the rush of wind in my hair. You couldn’t pay me to get on a roller coaster today. My brittle spine would snap like a twig.

Rides that only go in circles. Merry-go-rounds and that thing that spins you until the bottom falls out are the barf-inducing rides I’m talking about. If you have inner-ear problems, this is why.

Falling. When you’re a kid, you fall 10 times a day and think nothing of it. I’m not at Life Alert® level yet, but if I fell today, I’d call half a dozen friends to drum up sympathy. For the rest of the year, I’d blame every ache and pain on “the fall.”

The mall. A 13-year-old version of me would have been happy to live at the mall. Today, if I needed an Orange Julius fix that badly, I’d buy a HAZMAT suit and pay someone to brave the sea of humanity at the food court.

Answering a call from a number I don’t recognize. When I was a kid, the sound of a ringing house phone would catapult me off the couch to answer it with enthusiasm. It never mattered who the caller might be – that was a universally accepted mystery of the pre-Caller ID world we lived in. Today, if I see the number of a caller I don’t recognize, I won’t take the call. “A VOICE call? Are you kidding?” I’ll ask myself, as if human interaction simply reaches too far beyond the scope of what I can muster.

June bugs. Part of the humble june bug’s appeal to me as a child was that it didn’t bite, sting or spit tobacco like the ill-mannered grasshopper. The hordes of june bugs that buzzed around the back porch light were an early signal that summer was here. What’s not to love? I’ll tell you what: that infernal, creepy buzzing sound they make when they swoop past your ear; those clingy legs and feet; that rapid flapping of their wings – it’s enough to put me off summer entirely.