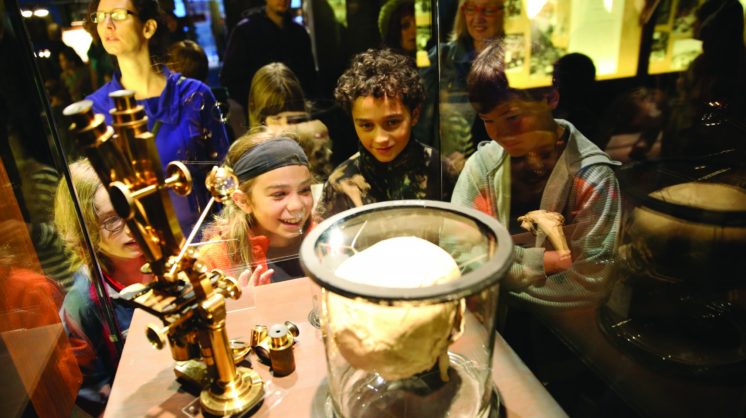 Exhibits Development Group had two world-class exhibits – “The Worst-Case Scenario Survival Experience” and “The International Exhibition of Sherlock Holmes” – with nowhere to go. At a time when hands-on exhibitions were not happening due to the COVID-19 pandemic, EDG needed a place for literary-based forensic detective work and escapes from zombies to take place once the world returned to relative normalcy.

“And they said, “Hey, would you all be interested in taking these exhibitions in, and then storing them, and when your community is ready and the time is right, let’s launch them?’” says Sherry Marshall, president of Science Museum Oklahoma. “And so we did that: We stored two large traveling exhibitions, and then we waited a little bit until we figured, ‘OK, May might be the time that we bring them out.”

Most importantly, both exhibits force visitors to find solutions to mysteries and predicaments in immersive, interactive ways. In cooperation with Conan Doyle’s estate, EDG created a detailed depiction of 221B Baker Street, the address shared by Holmes and his friend and biographer, Dr. John H. Watson.

Geoffrey Curley, the lead content designer for both exhibitions, said that Conan Doyle emerged at a time when science and deduction were becoming more common in police work and in daily lives. The Holmes methodology of deductive reasoning depicted in A Study in Scarlet and The Hound of the Baskervilles eventually influenced the real police work at New Scotland Yard and around the world.

“They expedited them,” Curley says of the Sherlock Holmes stories’ impact on police science. “So some of these tools that were being used [in Conan Doyle’s stories] started to be demanded by the public. If they read about it in Sherlock Holmes, they would ask, ‘Why didn’t you use this technique?’ It made the police a little bit more accountable for how they were investigating.”

As for the “Worst-Case Scenario Survival Experience,” the problem solving is similarly applicable to real life, especially for people who live near quicksand or find themselves needing to deliver a baby in the back of a taxi.

The best-case scenario for visitors is that they will feel immersed in the experiences. Curley’s background is in theater and scenery development, and so both exhibits feel like the real thing – even when you have to jump from one car to another on a speeding locomotive.

“Which, of course, we always have to do,” Curley says. “Or, jumping from a train, climbing around a building … all of these scenarios we kind of approach as if you’re going to be in the situation, so what are you going to do about it? How do you get out of it? Clearly, we’re all going to be in a plane that needs a pilot and we’re going to have to land it. So, that’s what we want to train people for.”

Visit sciencemuseumok.org for more info on these exhibitions, including hours of operation and admissions. And be ready for anything.