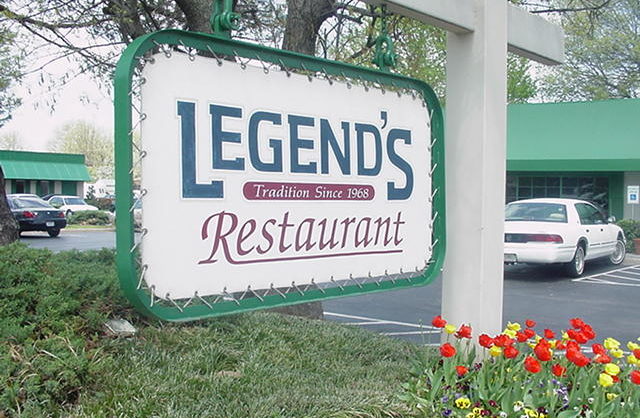 Legend’s Restaurant in Norman started as an Italian eatery and pizzeria in 1968. Joe Sparks joined the ownership team three months after the open, so he has – in one capacity or another – had the same job for 50 years.

“There were 11 stockholders when Legend’s opened, and a friend of mine from the Army was one of them,” says Sparks.

After graduating college in Pennsylvania, Sparks took a job with U.S. Steel, but a call from his Army buddy brought him to Oklahoma for the first time. He came to Norman, liked it and stayed. By 1980, he had bought out all the other stockholders and become sole owner of the restaurant at 1313 W Lindsey.

“I did marry a waitress in the interim, and now she’s our executive chef,” Sparks says of his wife, Rebecca.

The pizzeria concept only lasted until 1972. Sparks and the other stockholders changed the model and the décor, making it the restaurant that would ultimately garner notice from Bon Appetit and Southern Living magazines. The model became upscale casual, and the food was – and still is – heartland Americana with some international twists: beef, especially steaks, pork, seafood, veal, chicken and pasta.

Over the years, Legend’s has become rightly famous for its house-made desserts; they make 10 different options daily. To keep up with the demand, Sparks employs a full-time pastry chef plus an assistant. The notice in national magazines came as a result of those desserts, which are just as delicious today as they were then. The cobblers and bread puddings change daily, and the chef has a greatest hits list of cakes, pies and cheesecakes.

Sparks said running a successful restaurant for 50 years has been “a challenge every day.”

“We’ve definitely evolved with the city,” he says. “We started on a little two-lane street, and we’ve watched it turn into a landscaped boulevard. We still meet terrific people every day, and we’re proud of our involvement with social organizations, the chamber of commerce, the school board and all the other groups we’ve worked with over the decades.”

Sparks is also an encyclopedia of the history of Norman’s food scene. He can rattle off names of places and people, track the genealogy of a restaurant and tell stories with anyone. He’s been working in Norman since before the National Weather Service and Sooner (Fashion) Mall arrived. He also remembers another famous Okie “back when” …

“Hal Smith was the first manager at Crosstimbers Restaurant (ed: It closed in 1984.) I think he left there and went to work at Steak & Ale, and that was the beginning of his incredible career,” Sparks says of the founder and CEO of Hal Smith Restaurant Group.

“The food scene is exciting; it’s exploded since I started,” he says. “We have Blu, Blackbird, Scratch, Benvenuti’s – just a lot of great places to eat now.”