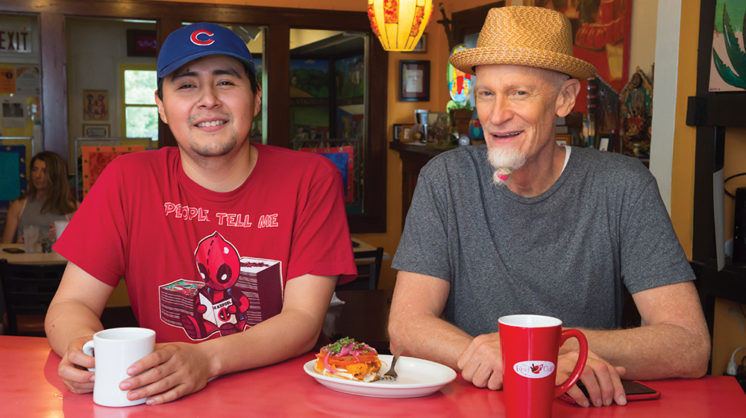 Take a break to slow down and savor a coffee and pastry, by yourself or with friends. When you do, you’re taking part in a Swedish social ritual known as “fika,” a practice so popular that Swedes spend 227 hours — 9.5 days — a year doing it.

The idea of fika, which is both a noun literally meaning coffee break and a related verb, has caught on beyond Sweden, and goes much deeper than grabbing a cup of java on the run to jump-start your day like many of us do in the United States. Fika is taking the time to enjoy the moment, to connect with others and to think about what’s important.

We know that Swedes spend 9.5 days a year on fika breaks because the 165-year-old Swedish coffee company Gevalia commissioned Cint/Fast Response to conduct an independent study on the practice in 2013. The study looked deeply into who was fika-ing, when they were having fika, how long the breaks were, what people drank and how they felt about them.

Despite the coffee company’s promotion of fika with fun and silly advertising videos and this study, Gevalia doesn’t own the concept. It’s easy to find examples of this Swedish tradition, even in Oklahoma City.

“You can do it alone, you can do it with friends. You can do it at home, in a park or at work. But the essential thing is that you do it, that you make time to take a break: That’s what fika is all about,” wrote author Anna Brones in a blog post at thekitchn.com, quoting the book she co-authored with Johanna Kindvall, Fika: The Art of the Swedish Coffee Break.

Employees at the OKC-based oil and gas data company Oseberg take their fika break weekly with beer. It’s an important ritual that allows everyone to be mindful and take stock of what’s important to the company, said co-founder and CEO Evan Anderson.

Oseberg founders infused the entire company with meaning that points to their values and their Norwegian ancestry. The company itself is named after a Viking longship discovered in 1903 in Slagen, Norway, on the Lille Oseberg farm.

They borrowed the tradition of fika from their fellow Scandinavians, the Swedes, when they started the company.

“Fika is a place where, philosophically, the concept is just a coffee break, where people sit around and talk,” Anderson says. “That’s what fika is all about: just taking a break, slowing down.”

During Oseberg’s version of fika, an employee will give a brief presentation on one of the company’s values and how it played out at the company that week. The group also will field questions, from the silly to the serious, and demonstrate how people are contributing to the company’s mission.

“Bringing out the best in others is how we find the best in ourselves, and this will be the forum where we will do our most courageous thinking together,” Anderson says. 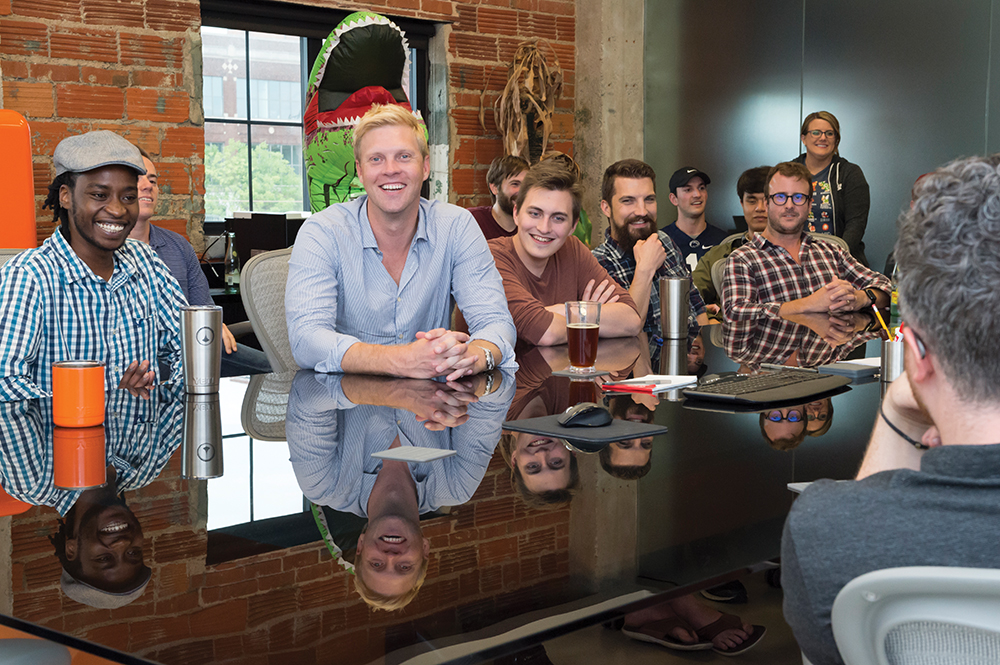 At The Red Cup, a coffee shop and restaurant at 3122 NW Classen in OKC, the concept of fika is apparent if not named. Everything about the 23-year-old restaurant fosters a sense of community and the idea of taking a break from the outside world — including the quirky local art often featuring red cups, the regular customers, the vegan menu and a neighborhood rooster named Coco who hangs out on the front porch.

“This place really is the center of my social life,” says regular customer Tony Owens, a Spanish teacher at Belle Isle Enterprise Middle School, while having breakfast and drinking coffee at the restaurant’s red counter, visiting with people he knows. “It’s really hard to put your finger on it. People just naturally start talking and making friends.”

In a word, fika. The relationships are apparent throughout the crowded restaurant, even out front, where a group of men — including Gary Barton, J.W. Jones and Dan Lay, a stained glass artist who created a Red Cup-inspired self-portrait hanging in one of the coffee shop’s windows — gather regularly to discuss politics, drink coffee and solve the world’s problems.

They all noted The Red Cup’s welcoming atmosphere and connectedness among patrons, no matter what your political views are.

When someone asked owner Kurt Orth years ago what he was really selling beyond the coffee and the food, he didn’t even have to think about it.

“It’s community,” he said. “The Red Cup has its own personality.”

A DIFFERENT KIND OF BREAK 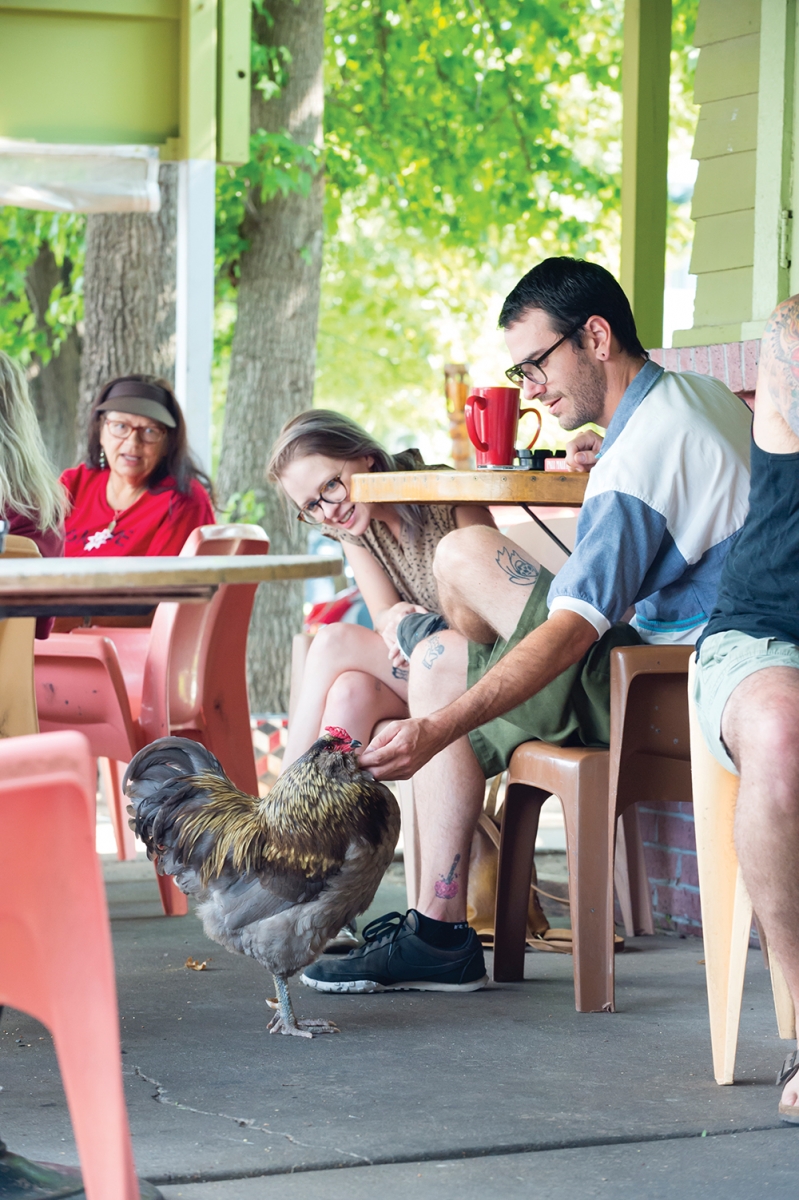 Other metro coffee shops have their personalities and their own ways of encouraging their guests to slow down and savor the moment. Step into the modern-looking Elemental Coffee, 815 N Hudson, to pair your coffee with an elegant avocado toast garnished with radishes, cilantro, sesame seeds and lemon zest, or one of the restaurant’s pastries or quiches. You can sit at one of the bench tables or the wooden bar and enjoy a view of crepe myrtles out front, or take your coffee break on the shop’s front porch. Elemental easily accommodates pairs or small groups, but many go alone, sometimes to work, taking a brief interlude for coffee.

When choosing whether to grab your coffee to go in a hurry or to fika, choose fika. Slow down. Savor it. Spend time with your loved ones, or use your alone time with coffee to reflect. And the next time you go for coffee, be mindful. You’ll be enjoying a little bit of Sweden in Oklahoma City.