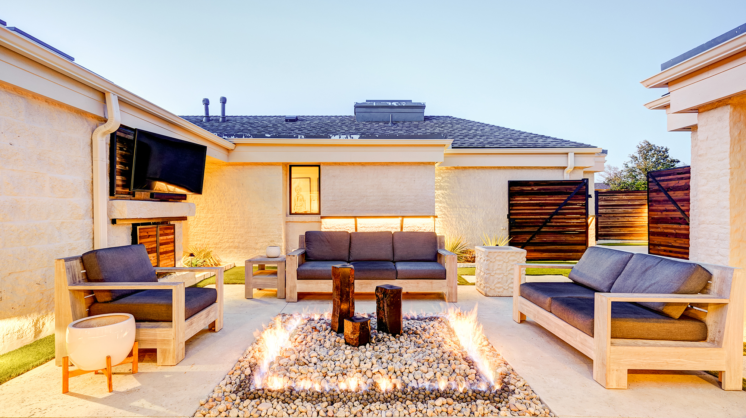 Harmonious designs make us feel all warm inside.

When home and patio designs are in sync, the combination provides a picturesque back- drop for friendly gatherings and good times. Sprinkle in a perfectly positioned fireplace or firepit and you’re bound to gather around, soak in the warmth and spark meaningful conversation.

While a fire feature certainly adds a special glow to any patio, landscape architect Brent Wall says it is the harmonious indoor-outdoor design that really makes a home sing.

“We want people to think it was all built at the same time,” said Wall, LAUD Studio director. For a seamless effect, Wall recommends matching styles and materials throughout the property.

“Some people want a fireplace and they instantly think of Colorado — this cozy, woodland kind of feel — and that leads them to do a stone. If the house is made of stone, by all means, do that,” Wall said. “But we’ll show up on some sites and there will be this sort of rustic, stone-clad fireplace with a lodge-y feel — and then the house is a mid-century modern ranch. Those are disparate feels. Whether you have a modern, mid-century or historic home, we want to make sure, stylistically, it [the fireplace] goes with the home, so it’s all one big complete home.”

Scale is another important design element. Like Goldilocks, a fire feature feels “just right” when it isn’t too big or too small compared to the home.

“One of the biggest mistakes I see is I will go into a 2,000-square-foot residential house, and you walk in the backyard, and they have an enormous fireplace,” Wall said. “We are trying to get the scale to the right size and match the home.”

When designed thoughtfully and properly, a fire feature can be the highlight of the backyard, and feel like a natural extension of a warm and welcoming home.

“We knew we wanted it to be out of that stone so it had a sense of purpose and connection to the architecture of the home,” Wall said, adding that the project was a “true collaboration.” LAUD Studio determined the site design, while Swift added special touches like customized copper gas lights and chimney crown..

“A custom-made steel pan holds the firewood, which is welded onto the wall, with ventilation drilled into the base to let air come through,” LAUD Studio director Brent Wall explained regarding the design. “In a way, it’s super simple; it’s just concrete and steel and it’s very low tech. But that’s kind of a signature of what we’re trying to do: designs that look simple but, in reality, take some work to pull off.”

Nelson Landscaping is at the center of this stunning fire feature. The layout complements a 1974 home designed by Fred Shellabarger, a well-known professor of architecture at the University of Oklahoma. In keeping with the modern architecture of the house, Nelson Landscaping designed and built a modern courtyard outdoor living area with a fire pit and water feature at the center. Landscape lighting illuminates the beautiful architecture of the home, as well as the trees and walkways leading to the courtyard.

Nelson Landscaping utilized the natural slope of this backyard and moss boulders to create a pondless waterfall, incorporating grasses, flowering perennials and ground- covers into the design to further enhance the natural beauty of the area.

“The client also wanted a firepit to sit around while enjoying the sounds of the water feature,” said landscape designer Scott Kilgo. “Both the water feature and fire- pit can be seen from inside the house from the back windows.