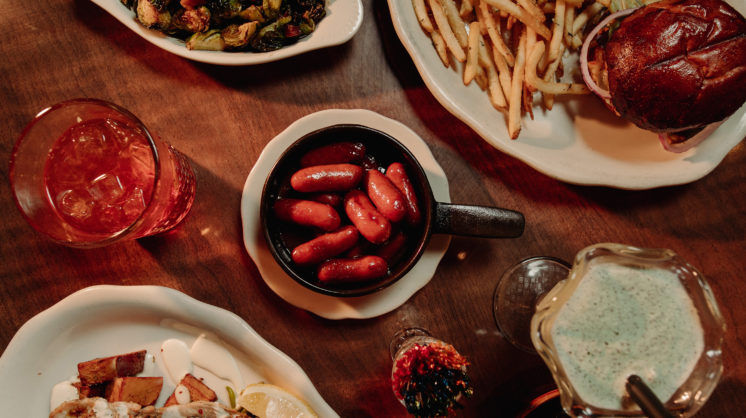 R & J Lounge and Supper Club began — conceptually, at least — on the back of a bag of R.F. Kluski noodles sometime in the 1960s. Russ Johnson’s mother found a recipe for stroganoff on the back of the bag, or it was passed to her at some point, and then she started making it for her family.

“I grew up in Crown Heights, and we used to go sledding at Douglas Park when I was a kid,” Johnson said. “My mom would load our thermoses with that stroganoff. It’s one of my favorite childhood memories.”

The rustic dish would serve as a target of sorts for what would become R & J’s menu. When it launched in 2014, Johnson started with what he calls classic ’70s cocktail party fare, including the now-famous cocktail wieners that are part of the concept’s branding, as well as a relish tray and the current best-selling menu item, cheesy crab toast.

“I remember these foods from my parents’ cocktail parties, and it was this trendy midcentury modern food at the time, but by 2014, it was passe,”

Johnson said. “I knew that people would either say, ‘What the hell is this?’ and make fun of it, or they’d get the nostalgic part. Fortunately, it was the latter.”

R & J launched during H & 8th, the old night market and food truck event that at its peak brought thousands of people to Midtown. Ludivine was still in its former building, and R & J occupied the back fourth of what was the Archer Printing building. Businessman, developer and racecar driver/collector Chip Fudge had purchased the building, and he approached Johnson, wanting to do something interesting with the midcentury modern facility.

“I loved the whole vibe of the cinderblock cube that backed up to an alley,” Johnson said. “It had an edgy, urban feel, and it reminded me of a few of my favorite places. The sliding glass door was an overhead door then, and there was no patio. We did open with a patio, but it was a couple years before we added the corrugated tin roof that it has now.”

The addition of the “den,” a mezzanine-level space opposite the kitchen in back that had been used as an office by Cooper House (which did the branding and logo design for R & J), made it possible to experience R & J in four completely different ways: bartop, main dining, den and patio. 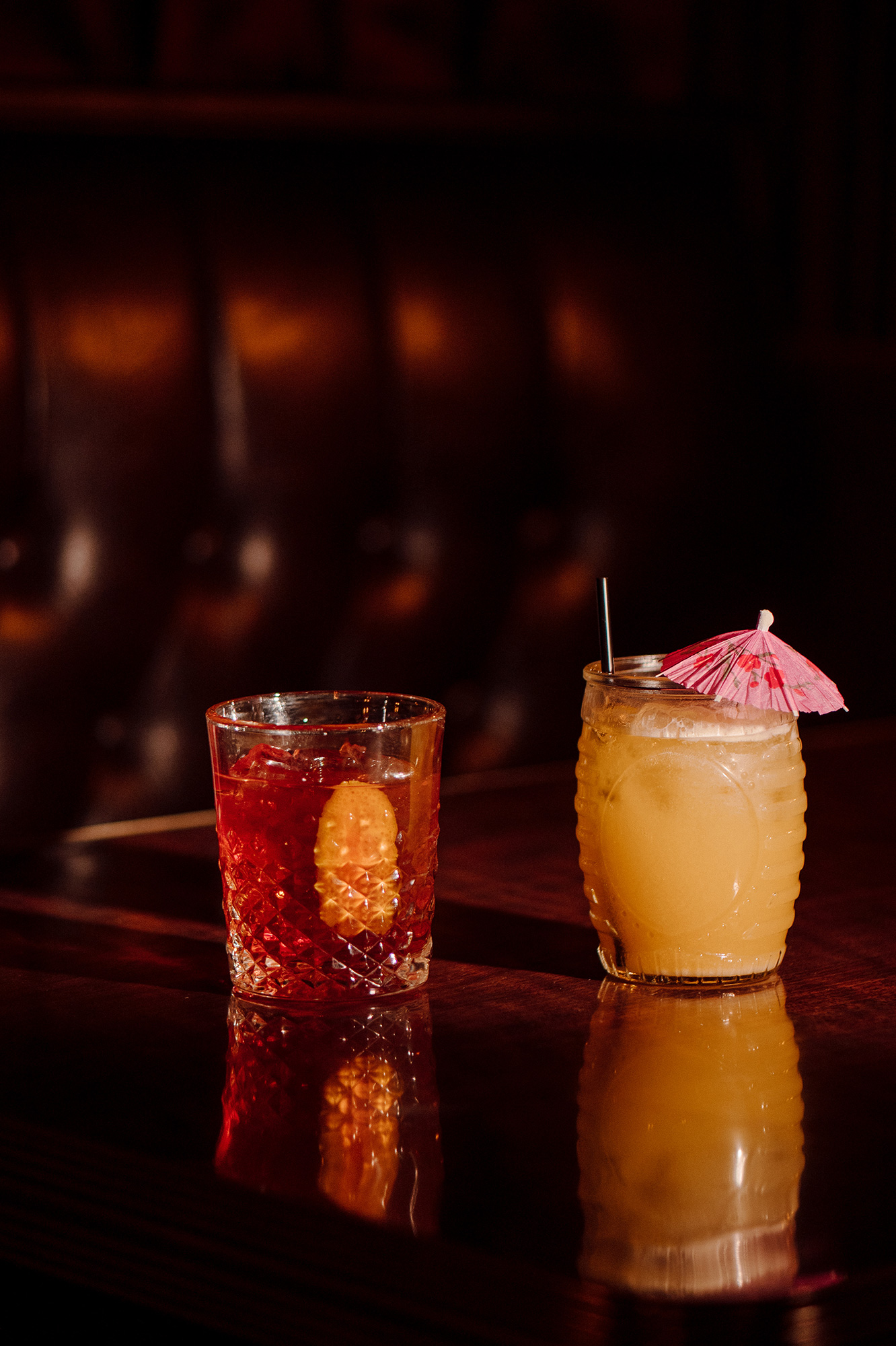 Johnson said that in the Venn diagram of what could be that occupied his imagination at the time, R & J was going to be a mashup of Junior’s, HiLo and the Wilshire Club — which is to say, a combination of dive bar and supper club that walked a narrow aesthetic line between too kitschy and whimsical nostalgia.

Because it managed to stay just on the whimsical nostalgia side of the line, it has become our city’s best day-drinking bar (which is a compliment). That means offering guests a chance to drink in the equivalent darkness of evening on the brightest of summer days. Sure, the patio is open, and that vibe is available, but for those to whom William S. Burroughs is a spirit animal of sorts, the bartop is where the best experience occurs. Opening the front door (west side of the building) often lets in late afternoon sunlight, and the response from drinkers looks like that moment in a horror film when someone discovers the vampire lair.

Patio or bar top, though, the drinks are the same: high in quality, crafted well and served by one of the city’s most knowledgeable staffs. It has in bar manager Mitch Czarneski a top-10 bartender both in terms of skill and understanding of cocktails and their history. General manager Brad Ackerman is equally skilled in the front and back of house, and he has the perfect even-tempered demeanor for a bar that can often turn raucous in a matter of minutes.

“We’re not everyone’s vibe,” Ackerman said. “We don’t carry the big American macrobrews like Bud Light, and we’re not interested in attracting everyone. The new bars in the area — plus COVID – brought a shift in our clientele briefly in 2020, but we’re back to our core now, because we don’t try to appeal to everyone.”

While the cocktail list has more than 100 choices, there’s a solid top 20 in terms of sales, and the bartenders are absolute masters of the Old Fashioned. A craft menu that changes seasonally allows for individual input, but classics are still the bulk of what R & J slings. 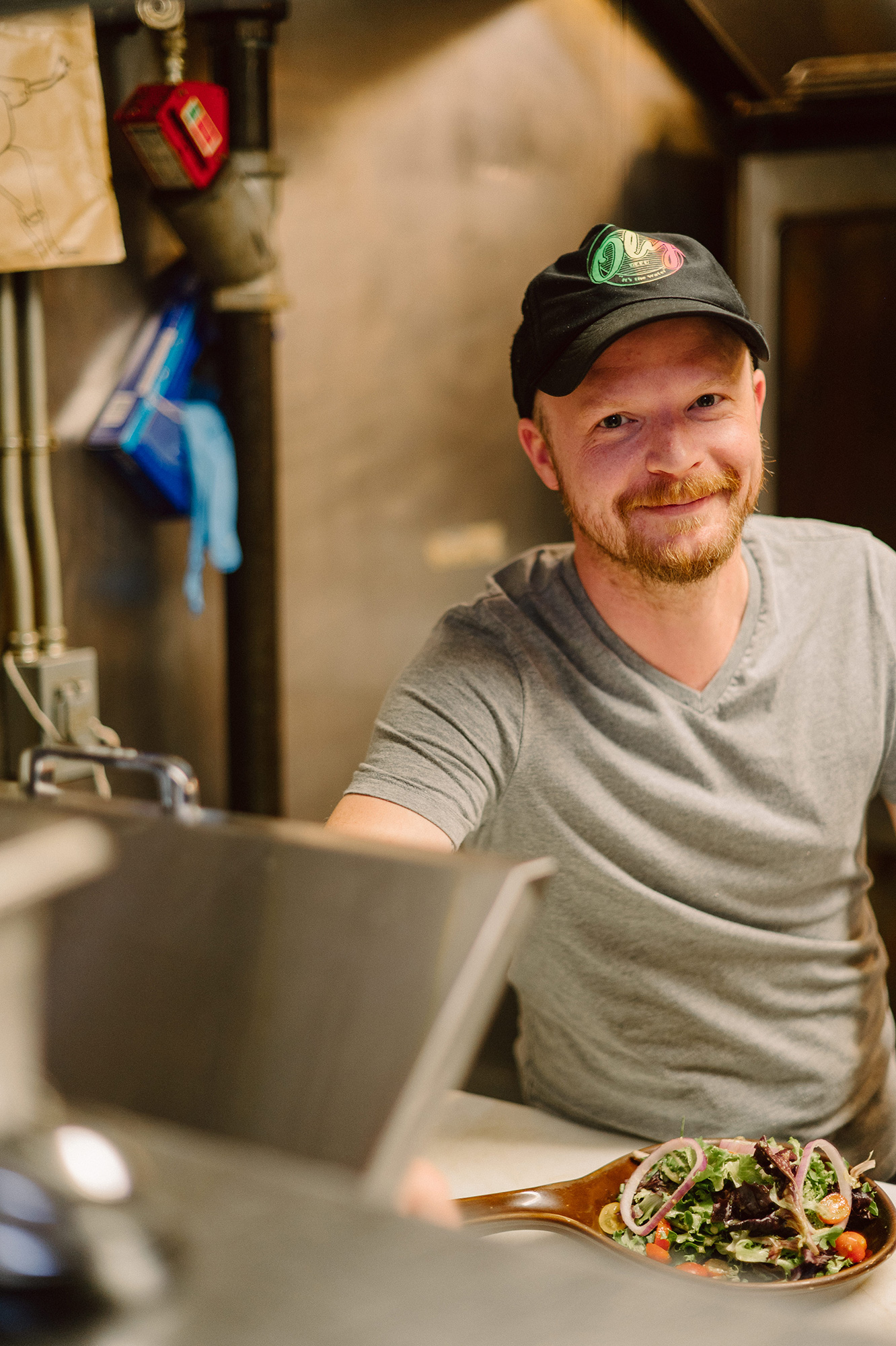 The most recent change is the acquisition of kitchen manager Ben Grossman, a talented young chef who came to OKC via Portland and Louisville. Grossman started cooking with his grandmother when he was four and cooked for an after-school program fresh out of his undergrad. His intention was a Ph.D. in biology — “I wanted to discover a new species and then maybe teach high school” — but he liked cooking better, so he headed for culinary school.

“I love the food here,” Grossman said. “During my interview, we had the relish tray, crab toast and pork and beans. I connected with the food right away.”

The menu hasn’t changed much. The pork and beans made with boar shank is a stunner, and chicken-fried steak outsells everything but the cheesy crab toast. The wieners hit nearly every table, and the umami burger is easily one of the best burger choices in the metro.

Ackerman did want to add one thing. “Can you tell people we don’t share a kitchen with Ludivine?” He asked. “We get that all the time, but we were here for five years before Ludivine relocated. We’ve always been a restaurant.”