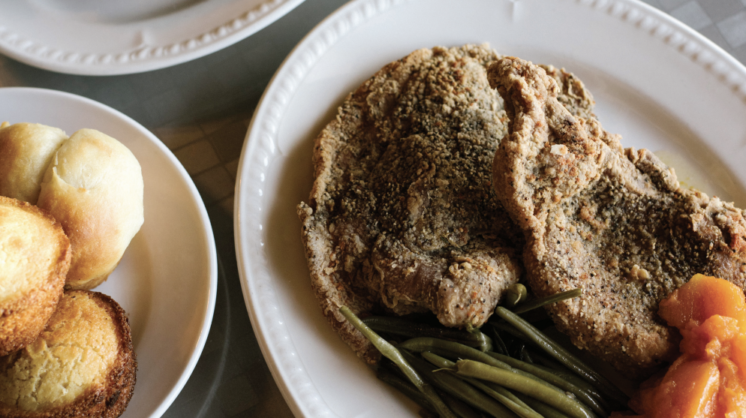 The dedication and drive behind an award-winning OKC classic.

This spring, Cadillac sent 405 senior writer Greg Horton and blogger/influencer Sarah James on a culinary adventure around Oklahoma City to talk to chefs about their food, inspiration and hospitality.

Florence Jones opened her eastside restaurant in 1952, and 70 years later, she’s still in the kitchen.  The recipient of a James Beard American Classics Award in 2022, the restaurant has been serving soul and Southern food in one of Oklahoma City’s historically Black neighborhoods from the beginning. Florence calls it country cooking; it’s the style she grew up with in Boley, Oklahoma, and all the recipes either came from her family or were developed by her along the way: yam fried chicken, turkey neck bones, fried ribs, pear pie, etc. Her daughter Victoria Kemp, who interviewed her mother for part of this segment, is now the operating partner, having joined her mom
more than a decade ago to help keep the tradition alive.

Kemp: Now that you’re a James Beard Award winner, something I know you never expected, talk about what you thought would happen with the restaurant when you opened it.

Jones: I thought I could make it two weeks. I was afraid I wouldn’t be able to make it because I was a country girl, and I was very quiet. I had to learn to talk over people; it’s why I talk loud now. My mom knew some people, friends with a print shop up the street, and he came down to see me, and he said, “I hear you opened this place with two chickens and a prayer.” But I learned to talk, and I had more than two chickens.

Kemp: You had to relocate after ten years because of urban renewal. What did you think would happen when you had to move in 1962?

Jones: I didn’t think my customers would follow me. Families didn’t have two cars back then, and I was worried they wouldn’t make the drive from 4th St. to 23rd. But I ordered tables and chairs and an ice maker just in case, and the second day I was open, all my wonderful customers came to see me, but the chairs hadn’t arrived yet, so no one had a place to sit.

Kemp: In 1969, the height of the Civil Rights Movement, you’re a woman business owner on the east side, Clara Luper, your friend at church,
is raising hell and getting things done. Were you worried that you wouldn’t make it?

Jones: I wasn’t worried by then. I’d been through so much, and done so much – I went to work at 6:00 a.m. and worked ‘til midnight, because I knew I was going to make it.

Kemp: Your daughter arrives from Dallas with all her big dreams and plans, how did you react?

Jones: You remember. I was telling you, “You’re spending too much money. You can’t do this and you can’t do that,” but you did all of it, and I give you credit for it. And now I’m gonna let you take it from here, because you did everything you said you’d do, and I can’t imagine it going farther.