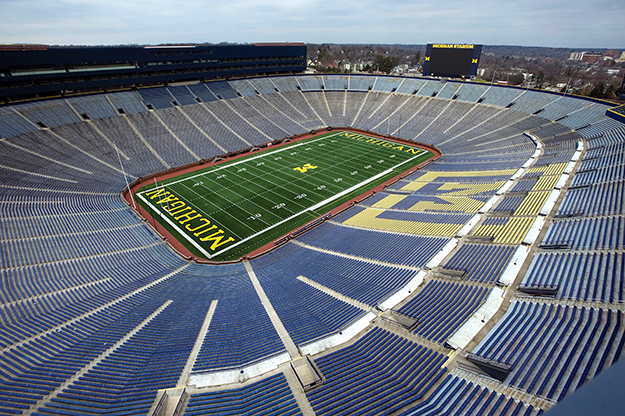 Ann Arbor is home to the University of Michigan. You can’t miss it:
The central campus sits on the corner of downtown like a giant spider
whose legs spread out between buildings and homes. Standing in the center of town and looking south on Main Street, you’ll see the Holy of Holies –
the football stadium.

Affectionately known as the “Big House,” it’s the largest in the United States, with an official capacity of 109,901. It’s been known to hold as many as 113,000. As popular as the games are, unless you hit a weekend featuring Michigan State, Ohio State or Notre Dame, your chances of getting a ticket are good.

The university is as valuable as it is inescapable. Among the several Ann Arbor campuses, the university serves 43,000 students. It boasts top-notch faculty, houses excellent museums and adds greatly to the diversity of the community. It contributes in so many ways – through the arts, in the demand for great and varied cuisine and in the rich intellectual life it encourages.

Art at UM takes several forms. The traditional Museum of Art consists of a classic 1910 structure and a contemporary addition, and its holdings range from traditional to modern and from European and American works to African and Asian creations.

Outdoor art is a major feature on the North Campus. Take off your shoes and really get in touch with Maya Lin’s Wave Field, a 90-foot-square space with grassy undulations, or ponder the complexities of Alice Aycock’s large steel sculpture “Summaries of Arithmetic through Dust Including Writing Not Yet Printed.” Or, just enjoy the straightforwardness of Dan Heikkinen’s bronze and stone “Wolverine.”

My favorite art spot was Motawi Tileworks, which handcrafts beautiful tiles for both decorative elements and stand-alone pieces. Owner Nawal Motawi creates many of the designs, but the company also works with other contemporary artists including Gary Phillips and Yoshiko Yamamoto, and produces works of Frank Lloyd Wright, Louis Comfort Tiffany and Charley Harper.

Other galleries of interest include:

• Selo-Shevel Gallery: Focuses on international folk art and textiles, and has branched into American crafts, fine jewelry and blown glass.

The Show Goes On

I’m not a diehard Woody Allen fan, but I loved “The Purple Rose of Cairo,” and Jeff Daniels could make my heart throb any day. Native to the area, he founded the Purple Rose Theatre in Chelsea (just west of Ann Arbor), and serves as its executive director in addition to his work as an actor and playwright. In fact, Daniels wrote the first play of its 2013-2014 season, a comedy called “The Vast Difference.” The theater season consists of four plays, staged over 43 weeks, seven shows a week. Whew!

Ann Arbor is also an important player in the contemporary pop music scene, and home to Ghostly International and Quite Scientific Records. One of its hottest venues is The Ark, a non-profit home for acoustic music with a wide range of folk and roots performed live 300-plus nights a year.

• Frita Batidos: Lunch here has to rank as one of my best experiences. Owner Eve Aronoff pays homage to Cuban street food with her fritas (burger equivalents) and batidos (tropical milkshakes).

• Gratzi: Italian, of course – it combined great choices with a cool venue, once a movie palace, and boasts iPad menus where a touch of the finger brought up photos and details about each dish.

• Conor O’Neill’s Traditional Irish Pub: lots of choices, including some real authentic dishes. The interior could have been imported straight from the Auld Sod, and much was: Stone for the floors came from an island off the Kerry coast and Irish stonemasons built the fireplace.

• The Earle: French and Italian provincial cooking with a wine list of over 1,200 selections. Winner of Wine Spectator’s “Best of Award of Excellence” for 21 years – all complemented with live jazz five nights a week.

Ann Arbor has it all in a walkable downtown. And shopping isn’t neglected here, either. I didn’t know what to expect before I visited this Michigan gem. I couldn’t have imagined a more delightful destination … and there’s football.