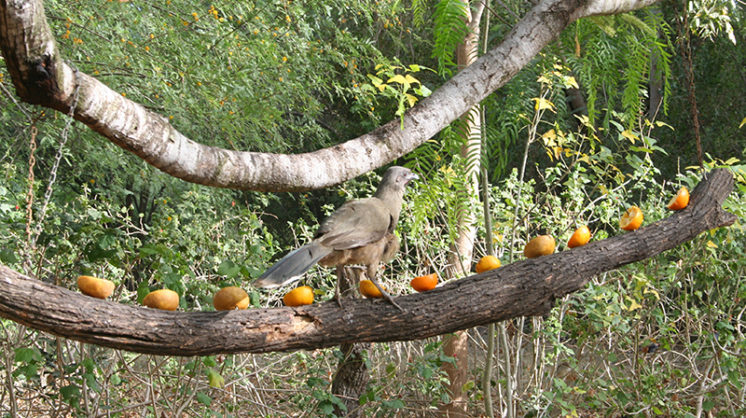 It would be too easy to say that McCallen is for the birds and it would sound demeaning. Truth is, though, if you’re interested in birding, this is the best place in the United States to go. And it’s great for other reasons, too. Just ask the thousands of snowbirds who trek down from cold climes to enjoy the sun, citrus and shopping. McAllen, Texas is a great winter destination.

Through the Looking Glass

More accurately, through binoculars is the way to see some of the area’s best features. The Rio Grande Valley is home to the World Birding Center, which encompasses nine sites throughout the valley–including Bentsen-Rio Grande Valley State Park, where the WBC headquarters is located.

This area is ideal for bird watching because two major flyways, the Central and the Mississippi, converge here. It’s also far enough south that colorful tropical species can often be seen. Nearly 500 species have been sighted in the area.

The WBC McAllen site is Quinta Mazatlan, an urban oasis centered on a 1930s mansion. The home was built by Jason Chilton Matthews, an eccentric composer, writer and adventurer. In Spanish Revival style, it features a clay tile roof and beautiful decorative tile accents throughout the house. He claimed that he built the adobe walls of the house from a secret formula based on the one used to build King Nebuchadnezzar’s palace in ancient Babylon.

The house is surrounded by trails through native woodland and thorn forest. Bird feeding stations dot the property, so you’re bound to see wildlife. And you can’t miss the raucous call of the eponymous chachalaca.

Bentsen-Rio Grande State Park offers seven miles of trails through a variety of habitats. A two-story hawk tower (with a handicap-accessible ramp) provides a great lookout spot for raptors. Bikes and binoculars can be rented at the headquarters and there are regularly scheduled tram tours for those who prefer to ride.

Just north of McAllen, the Edinburg Scenic Wetlands site attracts not only birds but butterflies and dragonflies.

You absolutely won’t go hungry in McAllen – there are over 600 restaurants within the city limits. El Pato is a Valley tradition. Years ago, a Mrs. Gonzales opened a tortilleria but when she noticed her customers were eating the tortillas immediately, she started cooking beans to sell with them. Today there are 13 locations throughout the Valley, including three in McAllen. This is fast food with a fresh, Mexican twist – great anytime, but I like it for breakfast. The pato is sort of like a burrito but not so neatly tucked. Choose from 16 different fillings to go in your corn or flour tortilla.

My favorite fancy food place is Frida’s – fantastic food with the most elegant presentations ever. Although they tout their steaks, I can’t get enough of their Mexican specialties. As the name implies, the décor includes homage to Frida Kahlo. Live music on Thursday, Friday and Saturday nights make it a great evening out.

For steaks, you can’t beat Lansky and Brats. They serve prime Allen Brothers steaks in a décor that recalls elegant supper clubs of an earlier day.

Hankering for sweets? Make a stop at the RGV Cupcake Factory. Owned by three Latina women, two sisters and a friend, the Cupcake Factory gained fame winning a $10,000 grand prize on the Food Network’s “Cupcake Wars.” You won’t find that creation on the regular menu, but you can’t go wrong with any of the choices.

Shopping is a major sport in McAllen. Within a 60 mile radius of the town, there are four million people – many on the south side of the border. The city is the number one shopping destination for Mexico, with shoppers flying in just to visit the many stores in the area.

Piñatas, maracas, paper flowers – all the traditional Mexican souvenirs can be found here plus some more unusual offerings. Stop by the Yerberia for incense and candles designed to remove jinxes, stop gossip, protect against envy and any number of other conditions.

Because of the popularity of quinceañeras in the Hispanic community, shop windows billow with ruffles and lace of all colors, looking a lot like cotton candy factories. The quinceañera celebrating a young girl’s 15th birthday may have its roots in the 15th century Aztec culture – but today’s celebrations are pure 21st century with limousines or party buses, DJs and dancing.

For beautiful high-end items, Jones and Jones, a four-generation department store, is a great stop. From Baccarat butterflies to designer fashions for men and women and beautiful decorator items, you can’t beat this store.

My favorite art gallery is Nuevo Santander. The stone building looks like a Spanish church with three bells mounted in openings in the façade. The elaborately carved wooden doors date back to the 1800s. Inside you’ll find not only beautiful artwork but outstanding vintage pieces including guns, spurs, Native American beadwork and religious artifacts.

When, Why, and Where

Sun? Though December and January are cloudier than most months, the temperatures are generally in the 60s and low 70s. The beach at South Padre is just an hour and a half away. Citrus? January is prime time for the Valley’s famous Ruby Red grapefruit and oranges are available as well – try Klement’s Grove. Shopping? Yep, ’til you drop. Where to stay? Lots of choices – but I love the Renaissance Casa de Palmas, a restoration of a historic hotel. For more information, contact the McAllen Convention and Visitors Bureau, mcallencvb.com.