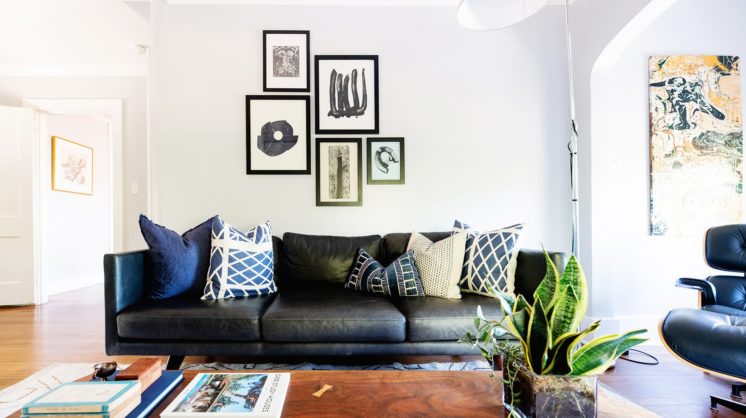 Considering how quickly Will Lightfoot established his Mesta Park home, his last name is fitting – nimble is an understatement.

“I found the house the first day I was on the MLS, and put a contract on it that day,” Lightfoot says.

His process was thoughtful – relying on the expertise of several friends – and fast. When he first toured the property, he immediately invited longtime friend and interior designer Sara Kate Little to come see it and provide feedback.

“I went over to look at it and it was just beautiful,” Little says. “I was laughing because that’s so Will; just seeing the right thing and ready to pull the trigger.”

Little and Lightfoot have known each other for decades. Their parents are friends, and Lightfoot introduced Little to her future husband, Jason. Little designed Lightfoot’s previous residence, a condo in Deep Deuce. Now, he was ready for a family home to enjoy with his 8-year-old son, Hudson.

“It was cool, because the home really felt like a graduation for him – a little bit of a growing up and the next chapter for him,” Little said. “He has Hudson, and it’s like the realtor set it up: There were kids riding bikes down the street that day. People were out walking with strollers. It was really clear that Mesta Park is family friendly.”

With Little’s wholehearted approval, Lightfoot purchased the house in March 2016. Then, he asked his friend Randy McDaniel with Backyard Solutions to add a pool.

“I told him, ‘I need this pool open in May,’” Lightfoot says. Hudson loves to swim and they both love to entertain, so a pool was a must-have. “There was no reason for me to move into a house unless I had an outdoor space and a pool to enjoy and have people over.”

It wasn’t until after the home was his that Lightfoot realized it was the same property his church friend Ty Bavmeister had previously purchased in foreclosure and flipped. This gave Lightfoot instant confidence in the home’s renovations, and it provided a solid foundation for Little’s interior design.

“I think the theme of the house really coming together is ‘old friends,’” Lightfoot says. “The ability to trust all the people involved was crucial in it coming together so fast.”

“I can always be confident in her taste, her eye for detail and her eye for quality,” Lightfoot says. “She is a self-starter and she finds great pieces quickly. A designer has to make lots and lots of decisions. If she was always having to come back to me to make them, or if she wasn’t confident, then it would drag the process quite a bit. It was important to me that she could take some general ideas and run with them. That’s what she does really well.”

The design timeline tightened after Lightfoot agreed to having his new residence on the Mesta Park Home Tour that December. In a matter of months, his place needed to be walk-through ready.

“That was further incentive to call Sara and say ‘Let’s just move completely in and do everything immediately,’ instead of the normal bachelor routine of putting a mattress on the floor and being OK with that for months,” he says.

Little was up for the challenge. She helped him fashion ideal spaces for father-son playtime, adding toy storage and large tabletops for LEGO builds to the main living areas. Little incorporated paints (like Benjamin Moore’s Pale Navy on the front door) and patterns (like Cole and Son’s Woods wallpaper in the powder bath) that played up Lightfoot’s affinity for trees and the color blue.

“I’m not super design-savvy, so I lean heavily on her,” Lightfoot says. “Because women don’t live here, I think she wanted to keep it masculine – but not hopeless bachelor. She wanted to give it a little bit of class.”

“I was teasing him, saying, ‘I know you’ve been living in a bachelor pad, but can I please make this a pretty one?’” she says.

Pretty-yet-manly elements include the Schumacher Deconstructed Stripe wallpaper and fabric layered throughout the master bedroom and the boldly colored Kilim rug in the living room. However, Little’s favorite items are in the dining room: a golden Sputnik chandelier and draperies in an almost-watercolor pattern, Clarence House’s Kiki.

“That’s the benefit of being good friends with a client – being able to get away with things like that,” Little says. “Had we not known each other so well, I think he would’ve been more anxious. We’ve known each other for so long, and frankly he kind of knew what he was getting into when he asked me to help: that I would push him a little bit and try to do something a little out of the box.”

Much of his artwork shows nature-inspired themes and was sourced by Emily Reynolds at Anonyma. Lightfoot’s favorite piece is a blue and green abstract that reminds him of leaves drifting in water. Reynolds lives in the Mesta Park neighborhood, but Little introduced Lightfoot to her shop, where she collects and sells works by lesser-known or unknown artists.

Thoughtful touches make the home feel unique, but the goal was always to create a place where boys can be boys. Nothing too precious. No rooms off-limits. In a home of boys, you can count on things getting a little messy.

“Hudson spends hours throwing a little basketball in the entryway. He’ll act like he’s playing the game and calling his own shots – ‘Hudson Lightfoot shoots a three,’” Lightfoot says. “Some designs, you’d feel uncomfortable if it wasn’t spotless all the time. This design is more conducive to having piles everywhere, not having to keep it spotless.”

The resulting design is a balance of casual and cool, with ample area to play and entertain. It reflects Lightfoot’s preferences and personality – and, of course, it was all finished right on time.