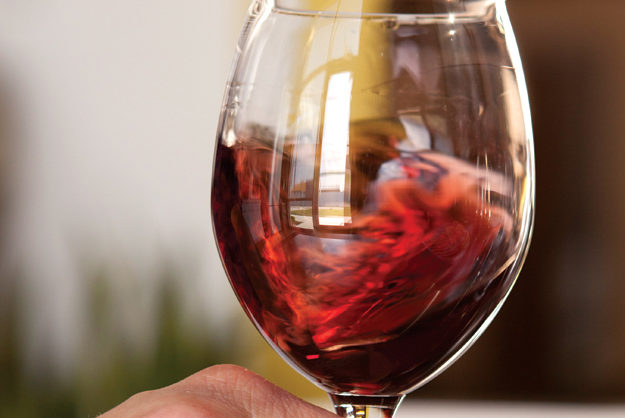 The wine industry in Oklahoma is growing. This is a given – the number of vineyards and wineries continues to expand each year as more and more people discover that the spirit of our state is ripe and fertile ground for the ancient art and science of wine.

The vintners and winemakers pursue their craft in an unlikely assortment of locations: from the Plaza District, a distinctly urban neighborhood in the midst of a renaissance; to the bustling commercial and entertainment center of Bricktown; to a hilltop far out in the country of Logan County, northeast of Luther; to the vicinity of Lake Thunderbird, east of Norman. They come from diverse backgrounds: a physician, a college professor, a forester… and many more. There are a multitude of stories, and they have taken a variety of paths to arrive at the intriguing crossroads that is the Oklahoma wine industry in 2012.

In many ways, wine in the state has a long way to go. The Red River Valley isn’t Napa Valley. The Oklahoma climate is famously harsh – from blistering 110-degree heat to crippling ice storms and bitter cold, not to mention tornadoes and brutal wind – and grape growers face many challenges. Plus, the state has only begun to embrace the idea of wine culture fairly recently. It is agriculture, it is business, it is education, it is art. It is romance and sweat. It is an uncertain investment and a labor of pure and joyful love.

It is wine, and it is Oklahoma, and it sings with the promise of tomorrow, of what is still to come.

Slice identified nine wineries in the Oklahoma City metro area – meaning a location in Oklahoma County or a bordering county. We assembled a panel of three wine experts to judge one white and one red from each winery, so that we might bring you the best wines that central Oklahoma has to offer.

The judging was conducted as a blind taste test at the Slice offices. Labels were concealed, and the only information the judges were provided was the general type of wine they were being given, e.g. Chardonnay, Merlot, etc.

Each judge was asked to rate the wine in three categories – appearance, aroma and taste – on a scale of one to 10, then to add the numbers from the categories to arrive at a total score. The three judges’ ratings were then added together to tabulate the final score for each wine. The maximum possible score was 90 points.

Each winery was contacted and given the opportunity to select one white and one red for the competition. In cases where the winery either did not respond to our query or declined to recommend wines, the Slice editorial staff chose which wines would be given to the judges.

The tasting was conducted on July 2.

Ian Clarke is a certified sommelier who has worked at Flip’s Wine Bar and Cheever’s, directed the wine program at RED Primesteak and served as wine director at the Oklahoma City Golf and Country Club. He is also an adjunct professor at Oklahoma State University, where he teaches wine and spirits classes in the School of Hotel and Restaurant Administration. He has been a judge for the wine competition at the State Fair of Oklahoma, and in 2012 Ian moved into the retail side of the industry as wine manager/purveyor for Broadway Wine Merchants. He was also recently named as wine columnist for The Oklahoman.

Matt Sterr grew up in the wine business, as his father opened The Spirit Shop in Norman in 1976. A graduate of the University of Kansas, Matt is now responsible for buying wines to feature in the retail operation. A member of the Society of Wine Educators and an alumnus of the prestigious Oregon Pinot Camp, he presents programs on wine for area libraries, and has served as a judge at the wine competition of the State Fair of Oklahoma.

Robin L. Obert is an Arizona native who grew up in the hospitality industry in a family that operated a number of diverse restaurants. She attended the Culinary Institute of Platt College, and after graduation moved to Oklahoma to work as executive chef and general manager of Platt’s Café Broccato. She later moved to the Platt north campus, where she taught front of the house fine dining for over three years. Robin is a certified sommelier and member of The Guild of Sommeliers, Society of Wine Educators and the American Culinary Federation. She holds a degree in culinary management from Le Cordon Bleu and currently works as an executive chef in Oklahoma City.

All three judges noted that Oklahoma wines have made much progress in the last five years, and that the industry as a whole is continuing to develop in the state. The judges also observed that the Oklahoma consumer market tends toward sweet wines in general.

Cabernet Sauvignon by Farfalla (not scored; bad cork). Judges emphasize this can happen to any wine and is not indicative of any deficiencies at this particular winery.