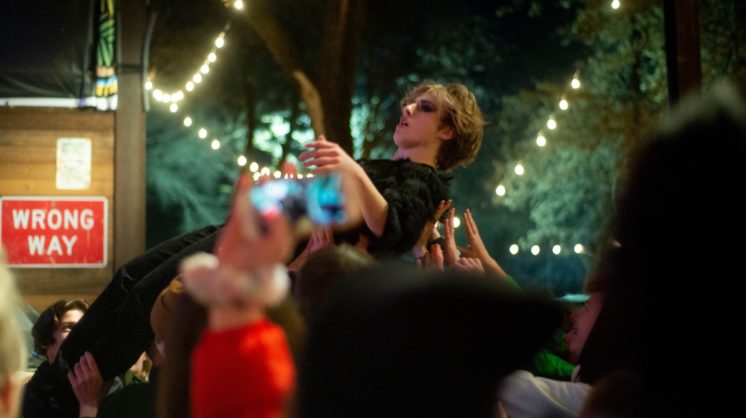 Upon landing a role in Netflix’s Christmas in the Heartland, Oklahoma-based pop artist Gavin Taylor saved up to invest in a career in music. Kickstarting the Treason 58, a garage band Taylor heavily influenced for three years, it’s no wonder the 17-year-old is already confident in the path he’d like to take. Unable to mark just when music became his calling, Taylor stated “It was almost like my first language, my sixth sense– the first emotion I really felt. Performing and creating the music that I hear in my head and all around me is my purpose in life.”

From Lawton, Oklahoma, Taylor wrote and recorded the album “Recipe for Clam Chowder” at the age of 14. Found on all major streaming platforms, the rising star refuses to slow down. When it comes to his creative process, Taylor finds a way to incorporate all aspects of life into his work. “For every song I write, I literally sit down and have to make a painting so that I have a physical concept. I don’t write down lyrics. I paint everything out and then that’s where the songs develop. Let’s just say I have a lot of paintings,” he said.

As a teenager, Taylor doesn’t shy away from difficult topics. An avid speaker for the youth, the musician wishes to leave his fans with a connection to their personal experiences. Taylor said, “I have a song on the new project called Floaters, which is about being driven insane by eye floaters. For one person, the song could resonate as a rocky and unsteady home life or a relationship of some sort. For another, it’s a personal obstacle standing in the way of their goals.”

To help others find themselves within his music, Taylor also emphasizes an important question: “If I can help a kid through the same anxiety and emotional roller coaster I’ve experienced by just writing a three-minute pop song, why wouldn’t I?”

Gavin Taylor is unlike most musicians, in that each original song started as an adaptable idea for a film, as his inspiration equally comes from early glam rock musicians and filmmakers. Isaac Stalling, Ethan Lynn Neil, and Johnny Manchild currently play music with Taylor. He expresses his gratitude toward Norman’s Sooner Theater, his mentor Tyson Meade from the band Chainsaw Kittens, and most importantly, his mother. With a vibrant stage presence and an impeccable taste for fashion, Gavin Taylor is a star worth pursuing.