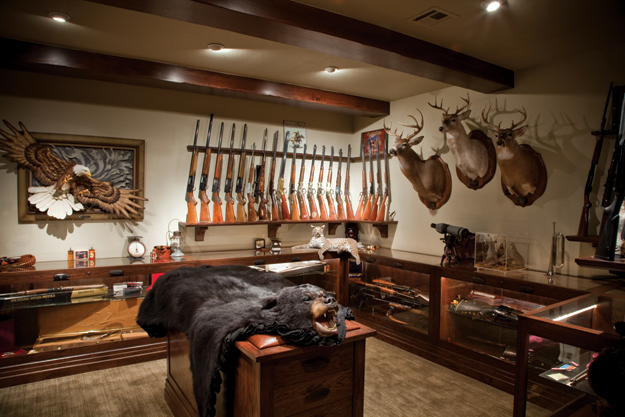 It is perhaps as primal and visceral a need as any in humanity: the need to have private space, to get away, to escape real life and be immersed in a world of one’s own making.

The composition of these private spaces is as varied and diverse as those who inhabit them. In recent years, men have begun to carve out places in their homes that meet their personal needs – whether to pursue an interest in solitude, or to commune with other men. The spaces range from spartan simplicity to wildly elaborate grandeur, and their design and content depend largely on the owners’ passions.

Welcome to the world of the “man cave.”

A love of the outdoors, and the lure of leaving the city, led the owner of this man cave to look toward the country when the youngest of his three children graduated high school. An avid hunter, he has a firearms collection totaling more than 150 pieces. But he had never had a place to display and enjoy them all.

“I always had them in safes,” he recalls, “and when my wife and I started to talk about moving out to 20 acres, we talked about having an underground tornado shelter. Then it hit me: why didn’t we set up a basement as a shelter, but also set it up so I can display my guns as well?”

The result is a steel-reinforced, concrete-lined basement safe room with a steel door, accessed by a secret entrance from the main floor of the home – and a showcase for an impressive collection of firearms, some more than a century old.

A 280-foot-long, 18-foot-deep French drain system keeps the basement dry, a two-zone ventilation system keeps moisture out of the air and a cell phone booster keeps the basement’s occupants in touch with the outside world. The owner designed the drawer pulls on the cabinets that hold handguns, and worked with the builder to design racks that angle the rifles and shotguns slightly, so the observer can enjoy the best view of each piece’s craftsmanship

It is an impressive place, made more so by the taxidermy that fills the room; from bucks taken down by each member of the family to a bear shot in Alaska by the owner’s son to a stuffed bobcat. There are non-hunting touches that lend a unique feel as well: the owner’s medical background is reflected in the authentic vintage operating room lamp hanging over his desk. He is also a railroad fan, and one cabinet is devoted to train memorabilia.

But unlike some prototypical notions of the man cave, this is not a spot where the owner comes to isolate himself. In fact, it is a place of family pride.

“Having this collection and, along with it, the tradition of hunting, has given me so much more time with my children,” the owner says. “That is very special to me. The collection part of it has united us. They bring friends to the house to see it. We’ve taken many of their friends hunting for the first time, and they feel like this is their room, too. If I can pass that legacy along to someone else, that’s just a wonderful bonus.”

“We are conservationists in the classic Teddy Roosevelt style. I love the country, the wildlife, the trees. We follow the rules of hunting, all the seasons, the bag limits. We’re very serious about protecting wildlife in Oklahoma and preserving it for future generations.”

It is a different view of the man cave, certainly not the stereotype of a man seeking to escape and indulge his passions alone. This man has fashioned a retreat that houses his pride and joy, while simultaneously allowing him to share it with family, friends… and the very countryside that surrounds his home.

The Automotive and Athletic Enthusiast

To call this space simply a man cave doesn’t quite present the entire picture. It is actually a 10,000-square-foot structure, formerly a maintenance building for a large commercial enterprise. The owner was looking for a place to store his beloved collection of American-made, low-production, high-performance cars. At some point along the way it became something significantly greater.

“The concept here went from a garage to an investment,” he says. “Now it’s not only a place to store cars, but is truly a place where you can come and hang out and do nothing, have fun, watch satellite TV. I’d always wanted something like this; I just never knew it would be this big!”

He made a few simple renovations to the building – varnishing the floors and walls, adding heat and ventilation systems – and moved in his collection. He owns two Dodge Vipers, including a limited edition, one of only 100 manufactured. He also owns a Ford GT 40 and a 1993 Chevy Corvette, the 40th anniversary edition, one of 250 in existence. “I have a car fetish,” he admits, and attributes much of his love of cars to his father, whom he calls “a shade tree mechanic from way back when.”

It is a fairly self-contained storage spot, right down to the gasoline: two 500-gallon tanks of high-octane fuel can gas up the cars right on the property.

But along the way, he had the idea to let friends rent space to store their collectible automobiles here as well. An Aston Martin and a Bentley, among others, also occupy the space. Then came the true man cave.

It is a comfortable space outfitted with half a dozen theatre seats and a pair of side-by-side flat panel TV screens. There is a bar and kitchenette and a table that can do double duty, either for business meetings or games of Texas Hold ’Em. The owner has a friend who is an NFL coach, and there is abundant football memorabilia. Not to omit a classic man cave component, a buck that the owner shot is mounted on the wall.

Neighborhood gatherings and birthday parties have taken place in the building, which took around six months to renovate and prepare for its new life. For a man who loves his cars, and who desired a comfortable place to enjoy life, it is the ultimate realization of that dream.