Getting on Board - 405 Magazine 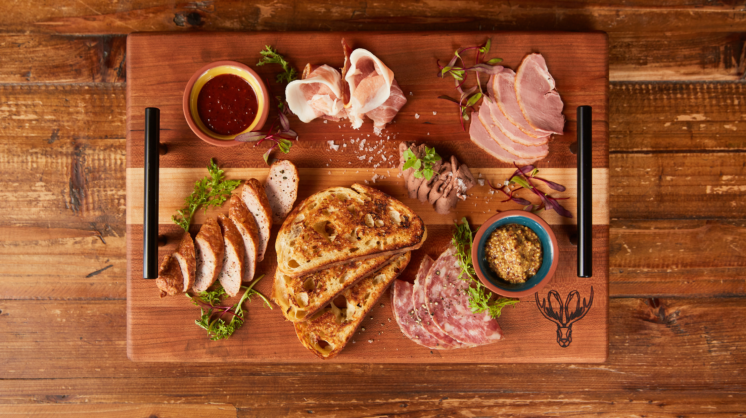 Chef David Henry carves out a niche in woodworking.

Chef David Henry spent 15 years of his career at The Coach House and The Hutch on Avondale. Prior to his apprenticeship in Chef Kurt Fleischfresser’s two-year program, he’d spent six years learning the craft from Chef Alain Buthion at La Baguette. Before he was a chef, though, he was working in kitchens as a way of “staying out of trouble.”

“My mom was a food and beverage director for a hotel, and she’d take me to work, where I spent time learning how to work in a professional kitchen,” Henry said.

He walked away from professional kitchens earlier this year, turning instead to a pastime that captured some of what he loved about cooking, but didn’t require the constant stress of staffing, customer service, ordering, inventory, personnel management — all the things executive chefs do beyond just cooking.

“I was burned out,” Henry said. “(Chef Michael) Paske’s death, COVID, the customers’ behavior after restaurants reopened, staffing issues — all of it was too much, so I left.”

Henry didn’t know much about woodworking prior to that decision. His father had tools, but he was a project manager for security software, so there was no home woodshop. When his parents moved a few years ago, his dad gave Henry the tools.

“I’ve always loved building stuff,” Henry said. “I’m a Lego nerd; I even have some of the Architecture series sets, so when he left me the tools, I started playing around with them.”

Henry said the similarities between woodworking and cooking were apparent immediately: techniques, processes, creative energy, complex steps and the satisfaction that comes when a dish/project is complete. He saw in the work an opportunity to use kitchens as a bridge to another career, and so Wild Hare Woodworking emerged from Henry’s quest for catharsis and peace of mind following his burnout.

“I’ll still help in kitchens when someone needs help, but this is what I do now,” he said. “I’m a quiet person for the most part, and spending time woodworking allows me to spend quiet time in my own head.”

Most of the wood he uses comes from Phoenix Hardwood & Plywood on N. Classen. His favorite is walnut — “It’s pretty” — but for his own home projects, based on his love for Midcentury Modern — “It’s my jam” — he uses sapele, a West African wood common in Midcentury furniture due to its beautiful grain and shimmery glow.

“I used hickory to make (Chef) Jonathon Stranger’s tables at El Coyote,” Henry said. “For his charcuterie boards at Osteria, I went with cherry and maple. I’ve sold custom boards to Vast, Osteria and Sushi Neko.”

The first cutting boards he made were for The Hutch, while he was still chef-partner. “I use face grain for charcuterie boards, and side and end grains for cutting boards,” he said. “Each design is unique, or the woods are unique for each customer. I don’t want to pump out the same things. I’ll use six to eight different species for a chaos board; I love them. I’m a chef, and I know how much chefs love tools that are unique to them, so I try to design and build accordingly.”

His goal is to move onto larger projects like dining room sets and credenzas, but for now he’s content making tabletops, cutting boards and charcuterie boards for restaurants and home kitchens. To inquire about custom work, he’s easy to reach at his WildHareWW social media accounts.