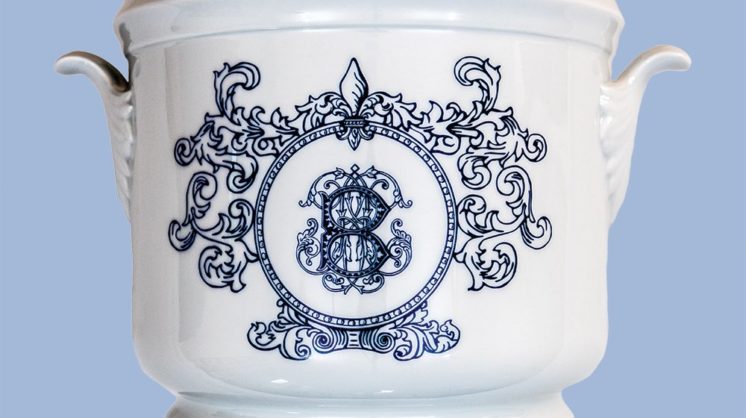 What’s in a substitute for a name? Symbols representing a name or names, consisting typically of a letter or several letters worked together, monograms have been used as means of identification for millennia.

In ancient times, monogrammed currency, which had initials showing the reign of a particular Roman or Greek ruler carved on clay coins, was used for barter and trade. Later in history, monograms became synonymous with a royal signature or seal for diplomatic documents — since most kings and emperors were not able to write, their monograms served as their signatures. The monogram, therefore, had to be distinguished easily from other symbols, and to signify power, it was important that the design be not only formal but beautiful.
Kings and queens also used monograms to stamp their personal property and household items, including linens, clothing, weaponry, armor, royal banners and coats of arms.

Today, monograms aren’t restricted to royalty, and are more associated with personal identity or branding than identifying personal property. Some companies have been successful at incorporating a monogram into their logos — one fashion icon to make this idea work is the Parisian company Louis Vuitton. Its iconic “LV” was made famous by Louis Vuitton’s son, Georges, who developed the logo to deter counterfeiting of the company’s designer luggage.

Monograms are readily found on linens and towels. However, some unexpected monogrammable items include upholstered furniture such as headboards and chairs, kitchen stove vent hoods and tiles. Patti Bray of Jones is an artist who works in clay tiles; her painted and glazed tiles range from contemporary three-dimensional wall art to realistic kitchen back splashes. Bray, who has a B.A. in commercial arts from the University of Central Oklahoma in Edmond, worked in advertising, but always had a side business producing custom art for clients and shows. Now, she is a full-time artist.

In Bray’s studio is a multitude of work showcasing her breadth of talent in tile artistry. Among the examples of monogrammed tiles are several recently produced for a young couple’s new home; one is a free-standing, 8 x 8-inch white ceramic tile which Bray painted with black and gold acrylic, with the monogram in Victorian script. “I love working with letters,” says Bray. “Lettering is a lost art. Very few fields of study today require handwriting.” 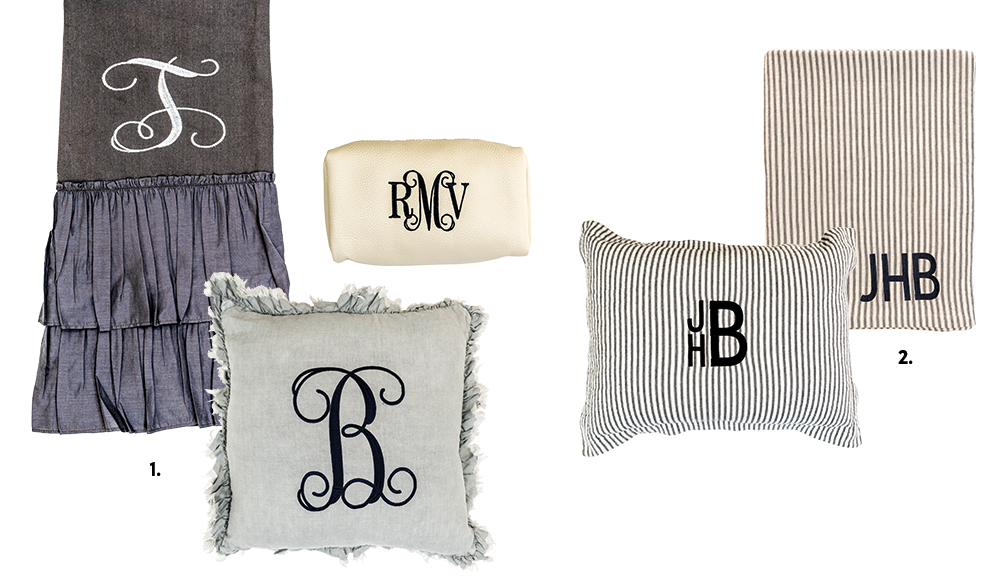 2. Quilt and sham from Herrington Design.

Bray suggested a small 4 x 4-inch tile with a single letter monogram would be a nice touch with any decor, especially a child’s room. “There are a lot of options for colors in both paint and glazes for firing,” she says. “Some clients will have their own tile, which will determine the options for paint or glaze.” Visit prbraydesigns.com for examples.

Monogrammed carpets and rugs add a distinctive statement to the home — and they’re one of Scott Rogers’ specialties. Rogers, who has been in the carpet business for 30 years, says each customized rug is unique. Generally, a 6 x 6-foot rug with a single-letter monogram costs approximately $300 – $500. Additional features could include border design, shadowing of the monogram and design detailing. “It is custom work,” says Rogers. “It depends on the time spent. Time goes hand-in-hand with the price.”

Rogers has been customizing rugs since 2009, and has clients who have used his services over and over again. He has done custom work for interior designers and commercial businesses, including a large “H”-monogrammed rug for the newly remodeled Haley’s Carpet at 3920 NW 39th. See some of his other work at rugsbyscott.com. 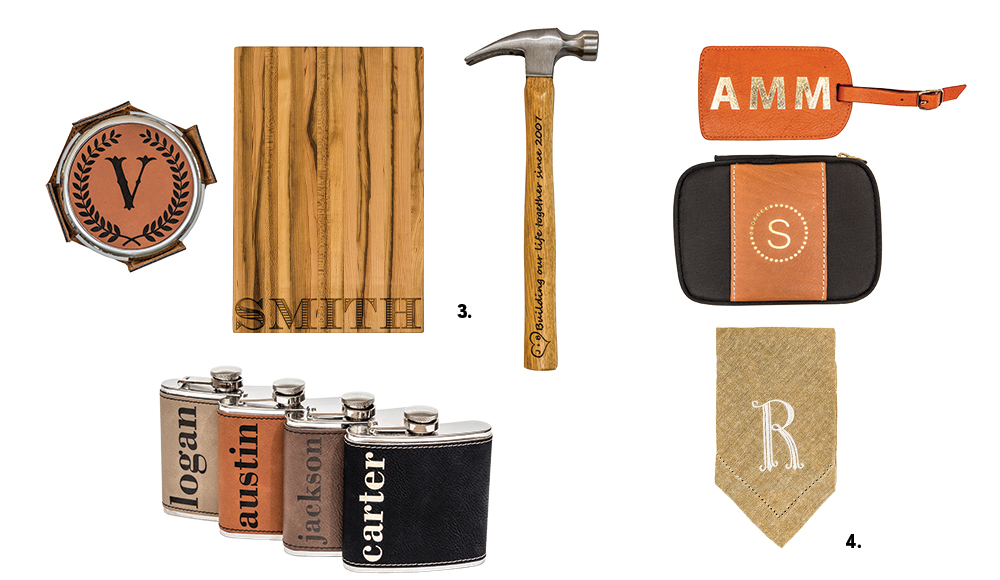 3. Hammer with engraving, Smith cutting board, flasks, V coasters all from Norman Stamp and Seal.

The House of O

The Overholser Mansion in Heritage Hills represents a prominent family that was influential to the establishment of Oklahoma City. Considered “out in the country” at the time it was built in 1903, the home-turned-museum, located at 405 NW 15th, is packed with monograms. “The initial ‘O’ is used throughout the house,” says Lisa Escalon, museum coordinator.

In the formal parlor and the music room, stained glass windows display the Overholser family’s coat of arms. This Queen Anne and Chateauesque architectural style home, which sits on 3 lots, has more than 109 stained and leaded glass windows. Monogrammed items that are original to the home include lace curtains, wood floors, luggage and a collection of souvenir spoons. The spoons, which display Mrs. Overholser’s monogram on the back, are from locations she visited: New York City, Chicago and Denver. Also on display are the family’s monogrammed china, crystal, silverware and table linens. The home was a center of social life for decades as the family hosted weddings, dinners and literary events. “She was known for lavishly entertaining,” Escalon says of Mrs. Overholser.

Their daughter, Henry Ione, had a silver service with her personal monogram “HIO.” She married David Perry, who became the heir to the mansion in 1959. He was instrumental in securing the home on the National Register of Historic Places. “It is an amazing house,” says Escalon. “It is a time capsule of a family that contributed so much to the community.” 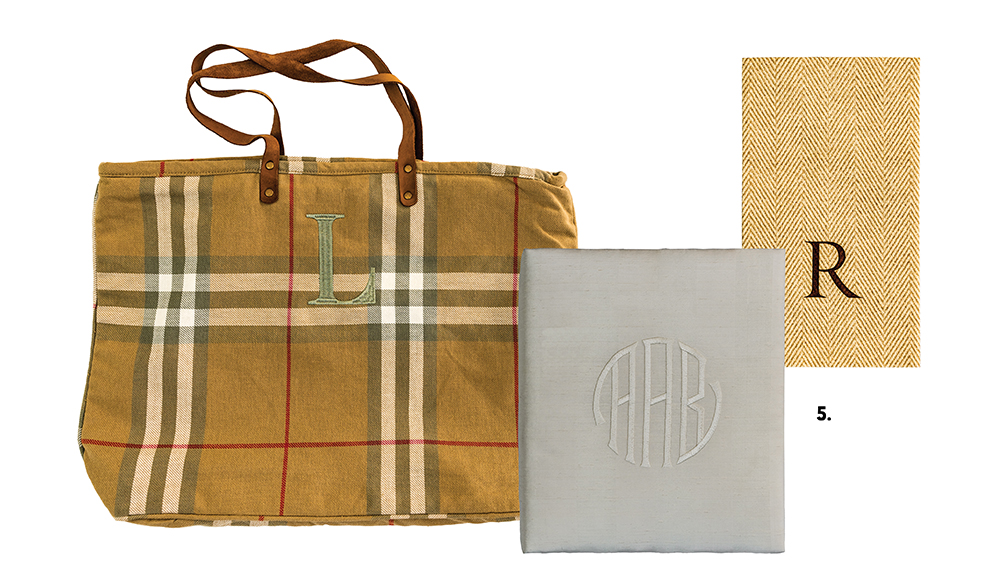 The most widely used format is the three-initial monogram. The last name initial is usually in a larger type and centered within the monogram, flanked by the first and middle initials, which are usually smaller. This is called the Victorian format. For example, Anna Ione Murphy would be AMI. To create a personalized monogram, use the first, middle, last name initial format with the type font style all the same size: AIM.

Create your own family crest or coat of arms by choosing a motif as a symbolic monogram, as has been a tradition for centuries. For example, Napoleon selected a bee to represent his empire, and Josephine picked the swan, a symbol of purity, love and fidelity. Be sure to research your motif thoroughly, as a flower such as lily of the valley may look beautiful, but actually represents death in some cultures. 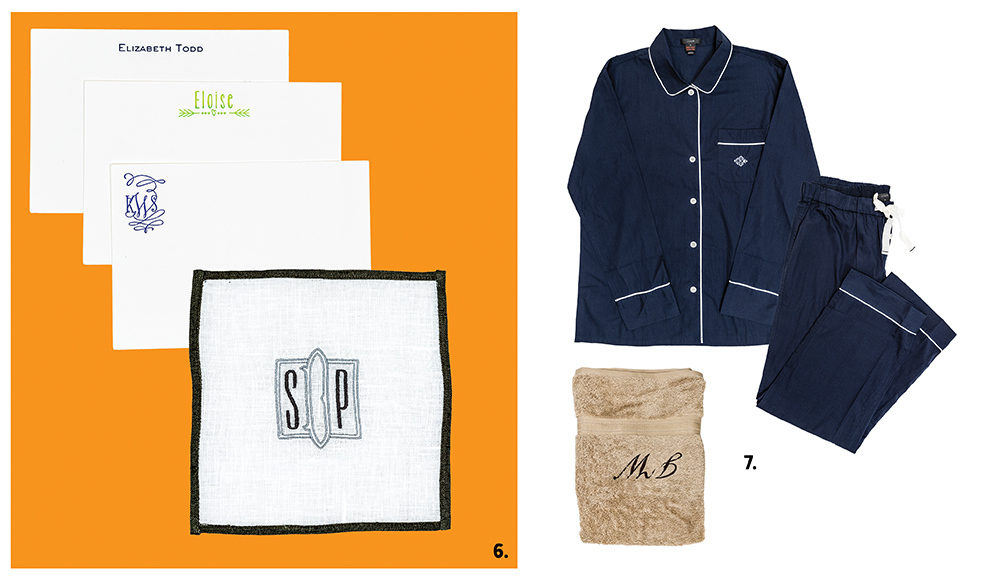