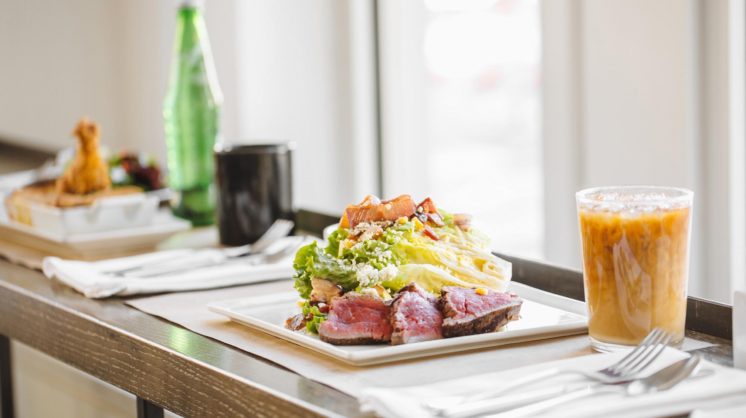 It’s best to admit right up front that the term “salad” is too vague to be useful if we’re looking for
prescriptive definitions, as in what exactly does and doesn’t go in one. Greens and dressing can
be a simple side salad. Emulate Cattlemen’s Steakhouse by adding cherry tomatoes and shredded
carrots—sure. Croutons and shredded cheese are acceptable too. At this point, it’s still faithful to
our collective mental concept. But a salad as a meal, say a lunch salad, can be a different thing
entirely.

For the sake of this list, the only requirement was to be listed as a salad on the menu. After all,
definitions are less important than just eating something delicious, so we’ve rounded up some of
our favorite lunch (or dinner) salads from around the 405.

As an aside, Heather Paul, co-owner and co-founder of A Good Egg Dining Group, said the
company features great salads on its menus because she’s learned during extensive travels that
great salads aren’t easy to find in restaurants, so she wants guests to always have great options at
AGE establishments. When even the barbecue joint has a great salad—the beef tenderloin salad
at Iron Star—you know she’s serious. That’s why AGE has two salads on the list, and it could
easily have been four or more.

Kitchen 324, Kitchen Salad. Our shiny new editor-in-chief Julie Partin picked this one, and
she’s not wrong. Beef tenderloin and bacon on the same salad? Genius. They could serve it on
cardboard and it would still be a winner with that meat combo. Instead, you also get avocado,
roasted corn, bleu cheese, and a sweet onion vinaigrette. It’s basically an entree masquerading as
a salad, and it’s delicious.

Pizzeria Gusto, Chopped Salad. Leading with the proteins again, because this one has salami
as part of the mix—and it works. The Gusto Chopped Salad is a cold, crunchy, satisfyingly salty
mix of romaine and radicchio with pepperoncinis, chickpeas, kalamata olives, tomatoes, and red
onions, finished with a house vinaigrette. Provolone cheese and croutons, too, so you get tangy,
creamy, crunchy, bitter, fresh, and so many other flavors and textures in the same salad.

Revolucion, Smashed Taco Salad. Rachel Cope, the founder of 84 Hospitality, said this is her
favorite salad in all of her concepts. Honestly, a taco salad is linguistic sleight of hand, basically
just an excuse to eat four tacos in salad form—and we’re fine with that. Buttercrunch lettuce,
tomatoes, red onion, cheddar, and tortilla chips finished with chipotle-buttermilk dressing. Cope
adds fajita chicken to hers.

Scratch Kitchen and Cocktails – Paseo, Farmer’s Salad. Chef Zach Hutton is putting out
some of the best food in the 405 right now, and this salad perfectly illustrates his philosophy and
method: scratch food sourced as close to the restaurant as possible. The salad is country ham,
fresh local peaches, arugula and spinach, house-made farm cheese, and whiskey vinaigrette.

Barrios, Tijuana Caesar. As with so many things AGE does, this dish is as beautiful as it is
delicious. The cumin-lime caesar dressing is also one of the best salad dressings in the city.
Combined with jicama, corn, and toasted pepitas, this one with or without salmon is stellar.

Saturn Grill, Strawberry & Spinach. This one has been a local favorite for many years, and if
forced to guess, we’d say it’s because of the coconut as much as the fresh strawberries. The salad
is rounded out with pecans and sweet lime-poppyseed dressing.

Scratch Kitchen and Cocktails – Norman, Kale & Brussels. A beautiful, simple salad that
works as a meal or side. Shaved Brussels sprouts and kale, tossed with lemon vinaigrette,
romano cheese, and toasted almonds. The combination is stunning in a way that’s very
unexpected from a salad.

Charleston’s, Walt’s Champagne Chicken Salad. When a salad contains pineapple,
strawberries, and dates, the possibility of it getting too sweet is very real, but Charleston’s tones
down the sweetness with feta and champagne vinaigrette. Throw in spiced pecans, croutons, and
sunflower seeds for nuttiness and crunch, and you get the perfect salad as a meal.

Cafe 7, Cobb Salad. The name comes from Bob Cobb—made up though the name sounds, he
was the owner of Hollywood’s Brown Derby restaurant in the early 20th century. Allegedly, it’s
inspired by leftovers, but the ingredients work in concert as if there had been far more intention
in the selection process: romaine and field greens, roasted chicken, hard-boiled eggs, bacon, feta,
tomatoes, and honey mustard. Actually, it does sound thrown together, but it’s still delicious.